I have cried during races before. (Take, for example, the Javelina Jundred last year when I sobbed like a little school girl because my legs hurt so bad.) But I've never cried BEFORE a race. Until the Corner Canyon 50k on Saturday.

The race was a benefit for ultrarunner John Maack (aka Johnny Runner) who has been diagnosed with cancer. He is in the midst of ugly chemo treatments....and still manages to get out on the trails to run. He talked for a few minutes before the race started about his trials and gratitude, and I admit that a little bit of awesome leaked out of my eyes. We all started the race feeling inspired. 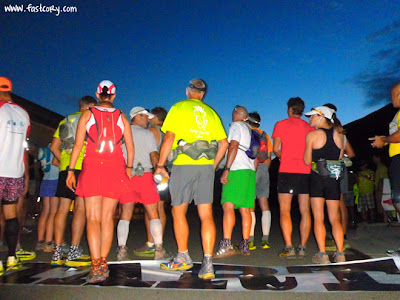 The temperature was perfect as we started, but I knew we'd be in for a warm day. The forecast was 98 to 100 degrees. We made sure to take advantage of our time before the sun came up. 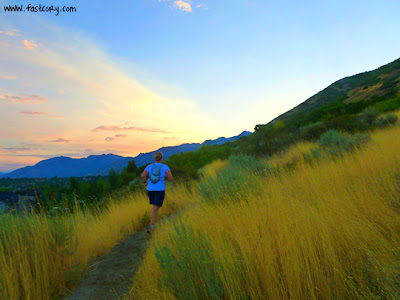 My friend Susette Fisher from You'll Always Have My Heart was also running the 50k. She asked me a week ago if I'd be interested in pacing her and helping her get to the finish. This was her first ultramarathon and I knew we'd have a good time together. 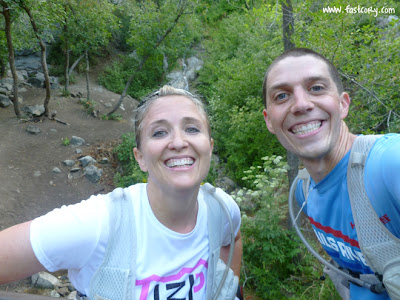 The first chunk of miles of the course is very runnable. There were some rollers but nothing major. And the trail was nice and smooth. We just cruised along. 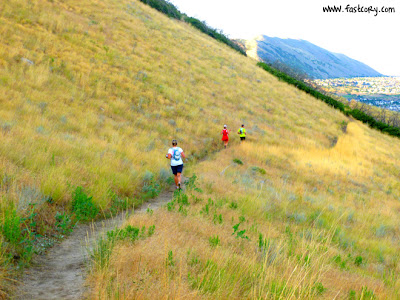 After a while we hit some hills. At the time we thought they were pretty good hills. (Later on we met REAL hills. No. They weren't hills. They were mountains. The kind that almost make you cry like a little school girl.) 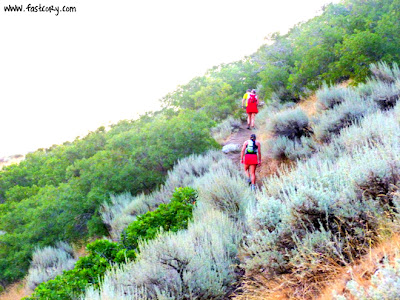 Without a doubt, my favorite sections of the whole race were parts when we ran under a thick canopy of trees. It was pretty much beautiful. The scenery is so vastly different from the red rocks where I usually run in southern Utah. 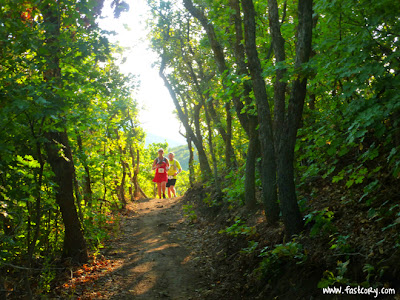 There was also a 25k that started an hour after us. After a few hours we heard some rustling behind us. And then a guy went screaming past. I'm positive this guy won the 25k because he was light years ahead of the next 25k runner. 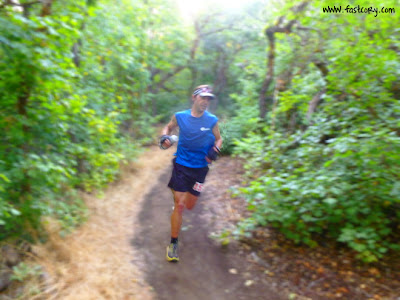 One of the things I love most about ultramarathons is the aid stations. When you're out running all day, your body needs more than just a few Gu packets to get you through. At each station I loaded up on Skittles, chips, pretzels, and an embarrassingly large amount of Coke. 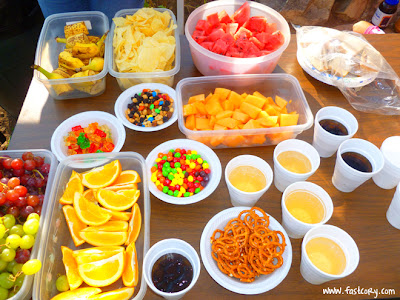 Susette caught on quickly to the strategy in long trail races. Sometimes the trail will let you run. And when that happens, my friend, you RUN! But sometimes the trail makes you put your hands on your hips and climb. And climb. And you can feel your heart beating in your head. And you can't seem to get air into your lungs. And your calves feel like someone poured lighter fluid on them and started them on fire. And then you climb some more. 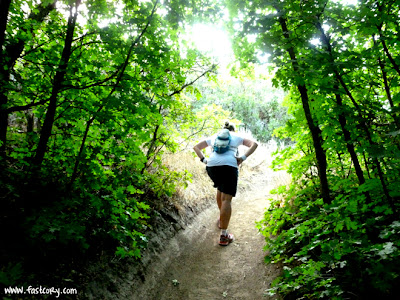 We had one little stretch of flat land around mile 15 before the real work of the race began. 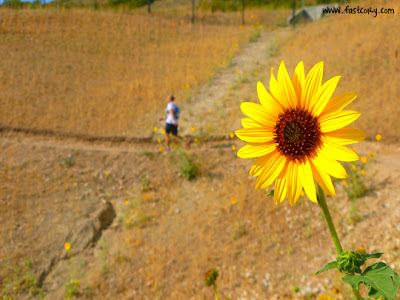 We had started some of the lung-burning, leg-demolishing hills which hurt, but we were rewarded with some amazing views of the valley below where we had started. 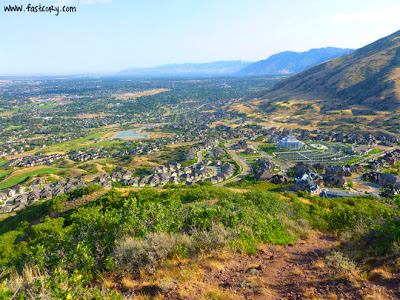 Part of the course includes a trail called Widowmaker. I had never been on this trail before, but was kind of excited for this section because I thought it would be cool to finish a race that included the word "WIDOWMAKER" in the course description. Here is where the fun begins: 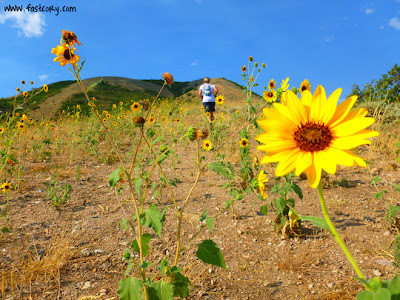 The trail is so steep that in some sections we had to try to scramble up on our hands and feet. The steep incline is punishing and brutal. And it goes on for MILES. Those two miles took us an hour. After a hard push, we made it to the top of Widowmaker! We survived, and thankfully neither of our spouses became widows. 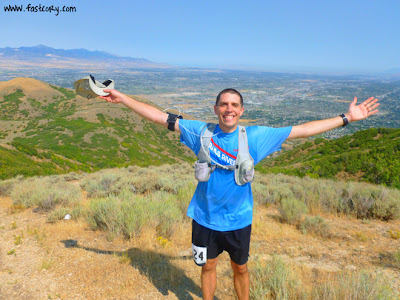 We were now 18 miles into the race and it was sweltering hot. In some canyons it felt like the heat was swallowing us. Every once in a while we passed under a tunnel which gave a much-appreciated break from the heat, if only for a few seconds. 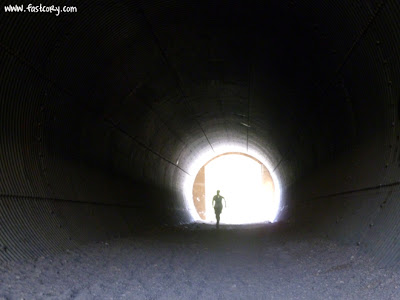 The Corner Canyon Ultra Trail Run had race organization down to a science. And this was a first year race! The aid stations were well-stocked and had lots of ice. (A life saver!) The volunteers seriously could not have been better. They were incredible. And the course marking was the best I've seen in a trail race. The ribbons were everywhere. It's a huge relief to not worry about getting lost. 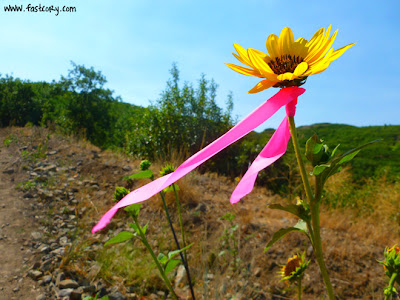 Susette did awesome during the race. The only time I really had to help much was around mile 28. She started to stumble around a little and had a hard time keeping going. I had a hunch that maybe she hadn't stayed on top of nutrition and convinced her to eat a Gu packet. About one minute later she was like a new woman! It was like she drank a gallon of 5 Hour Energy then darted down the trail. I was feeling good. (Fear not, I saved my hard crash for after the race.)

After 9 hours and 47 minutes we crossed the finish line! I was very proud of Susette. My favorite part of the entire day was at the finish line talking to John Maack. He is an inspiring runner and human being. I was touched that such a huge group of friends and fellow runners were there to put on the race for him. To think that he is out running while he has a port in his chest for chemotherapy is astounding. It was the perfect ending to an amazing day. 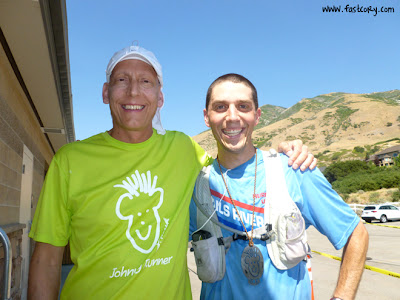 Apparently my body thought it would be downright hilarious for me to get really sick at the finish line. Once I stopped running everything started spinning and I had a few dry heaves. I wanted to keep talking to John but decided I better step to the side so I didn't throw up on his shoes.

I couldn't be happier with my day. Aside from a hit of post-run nausea, I felt good all day. It gave me a good confidence boost for the upcoming 100 miler. I have no doubt that the Corner Canyon Ultra Trail Run will become a renowned race. They couldn't have organized the race any better. Without question this is one you need to add to your calendar. 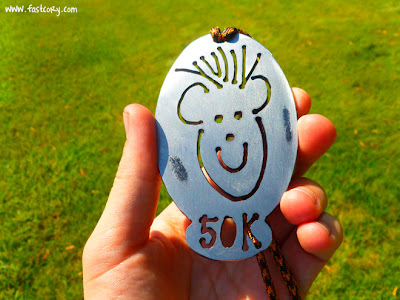