I Was THAT Guy!

At the Corner Canyon 50k on Saturday I was THAT guy.

You know THAT guy. He's the one wandering around the finish line that everybody is looking at thinking "Boy, I'm sure glad I'm not THAT guy!"

One year at the Top Of Utah Marathon, THAT guy was at the finish line with red streaks down his shirt from some bloody nipples. I was sure glad I wasn't THAT guy!

One year at the St. George Half Marathon a guy was wearing too short shorts. He woke up that morning and thought "You know what? I feel SO patriotic today! What can I do to display my patriotism on a chilly January morning? I've got it! I'll wear my too short flag shorts!" I was sure glad I wasn't THAT guy! 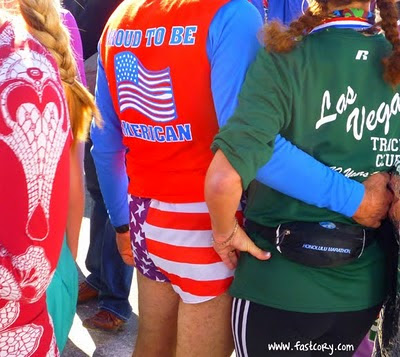 Well, on Saturday I was THAT guy. Despite some difficult trails and temps flirting with 100 degrees, I felt great all day. Until I stopped running. That's when it hit. My body got tingly. My vision started getting fuzzy. And the nausea?!?! Holy Aunt Jemima, the nausea! I had a few dry heaves but nothing came out.

I realized that among the crowd at the finish line......I had become THAT guy. I could feel people looking at me out of the corner of their eyes. They were probably placing bets on how many minutes it would take before I blew chunks. After about ten minutes a guy came up to me and said "Are you okay?" I told him I was fine. Just a little sick. Then he gave me a pep talk about throwing up. He told me it was okay to barf, and I would probably feel better afterward. "Don't worry. All of us have done it." he said. I didn't tell him that I have too. I appreciated his concern. It's not everyday that you get a pep talk about barf after all.

My friend Susette happened to grab a picture of me trying to keep liquid in my stomach instead of on my shoes. I was only slightly exaggerating how horrible I was feeling. 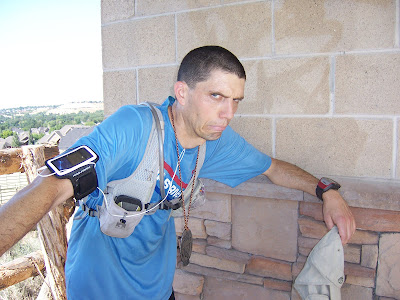 I'm telling you - it was miserable. I would rather have bloody nipples or wear hideous teeny flag shorts than be THAT guy who passes out and/or throws up on someone's shoes after a race.
Posted by Cory Reese at 7:39 AM