I was so excited to have my 11 year old Jackson come and help crew for me at the Bryce 100 a week or so ago. He was excited when I asked if he wanted to write a race report. So here is Jackson's report and some pictures he took during the race:

4 A.M. was when it all began! "Beep, Beep, Beep, Beep," was the sound of my dad's alarm going off. It wasn't supposed to wake me and my innocent mother up but unfortunately it did. My dad shut the alarm off and got in his race clothes and headed out the door saying good bye as if he wasn't going to make it back alive! He met his friend Jared at the front of Bryce View Lodge (where we stayed, however was not the greatest hotel because they did not have working ice machines which are the GREATEST part of staying at a hotel) and they made their way to the starting line.

At 7 A.M. I couldn't wait any longer! I had to wake my ever so tired mother up. I chomped up my Honeycomb cereal and hopped into the car as we hoped to meet dad at the Proctor Canyon Aid Station (2nd Aid Station, Mile 19). We took a long dirt road past beautiful Tropic Reservoir and turned at a road that would take us to the aid station. The directions said to go down the summit 2 miles then turn left. If we would have done that, we wouldn't be here today! We traveled on a very rocky, and uncomfortable road that made you want to vomit (saw some of that on this trip) for over 12 miles until we reached the highway at nearby city, Hatch. "$*@#, how did we miss it?" my mom said! Cuss words flew from the mouth of my mom. It was not a pretty sight! 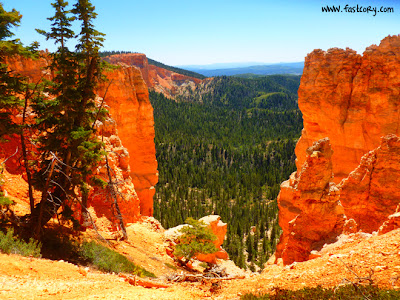 Very disappointedly we made our way back up to the ever-so famous dirt road. We drove again on this road even farther than last time and turned on Blubber Creek Junction and made our way up a twisty road to the Blubber Creek Aid Station. There we met some of our friends Cherie and Alex Santiago and their kids had come up to run the Blubber Creek Aid Station. We were surprised to see just them. They had invited several others but nobody showed up. My mother and I decided we would help keep things running and things kept pretty smooth. However, one bullet took some blood out of us. It was when Mike came into the aid station! Mike was a nice man just a few minutes in front of Jared and my dad but when he came into Blubber Creek, he was extremely dehydrated. He needed to be in shade and the only place where shade was located was inside the crammed tent! He sat down on a camp chair and had dry heaves and almost made my mom barf herself! Finally, after an hour, Mike continued his journey in the race just as Jared and my dad were coming in. When I saw my dad, I could tell something was NOT good. The stomach. The thing in the human body which can mess EVERYTHING up. We tried to get him to eat, but all he could manage was an orange slice, a bite of banana, and about 10 Goldfish. We generously refilled his pack with an AWESOME drink. Tailwind. And with that, he set off to the Kanab Creek Aid Station! 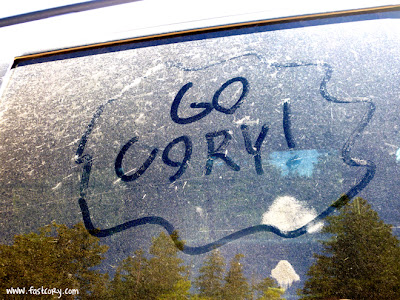 We exited the Blubber Creek Aid Station in our gray Dodge Durango and made our way out to the Kanab Creek Junction and followed a dirt road for many miles. We reached the aid station and set up camp chairs and waited for Jared and my dad to come in. Personally, this was my favorite aid station. Lots of people had come to this aid station because it was fairly accessible and there was great scenery near the aid station. There were lots of people cheering on the runners which made a swell environment. We had predicted to wait numerous hours but were surprised to see Jared sprint into view. My dad was not with him! I wondered how far back he was but minutes later I said "Is that dad?" Sure enough it was my Hostess-Loving dad! We had been keeping my dad's sister, Hollie updated (she paced my dad in the Zion 100, another great race). She told us that Coke was the secret to get him feeling better. I came up with the name "Miracle Juice" for this life-saving drink. We gave him some Coke, Ramen and some more Tailwind. Then he and Jared happily left the Kanab Creek Aid Station! 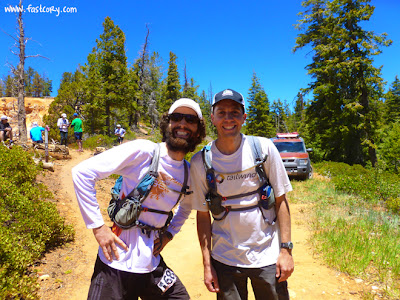 We then started the drive to the next aid station and the most accessible one, Straight Canyon Aid Station. We got there with lots of time to spare. We waited about an hour until we saw Jared strutting down the hill leading the the aid station. And like Kanab Creek, my dad came in minutes later. They sat down together and I managed to get my dad to drink some more Coke and a hot, fresh bean burrito! Again we refilled his pack with Tailwind but the two didn't want to stay long and headed for the next aid station, The Pink Cliffs. This was VERY hard to drive on so we decided to just go to the next aid station, Crawford Pass.


We made our way up to Crawford Pass, the halfway point in this race. This is where they would turn around and make their journey to Ruby's Inn. We waited a long time and hung out with Jared's family. After multiple hours we saw Jared hobbling up the hill to get to the aid station. We chatted with him for a minute and then my mom and I decided we would go get my dad. We started walking and shortly after we found him jogging down a hill, still with that stupid knee bugging him. At the aid station, my dad knew he wasn't going to make it to the finish and even if he did it would take him at least until past 6 O'clock the next day. He couldn't decide what he should do! Drop, finish, or 100k? He said he would probably drop at 100k which was going all the way back to the Straight Canyon Aid Station! Jared was feeling really good at that moment in time so the two carried on. My dad said early on in the journey back to The Pink Cliffs, there is a big hill. My dad told me Jared felt really bad and decided he would not finish all 100 miles.

It was getting late so my mom took me back to Bryce View Lodge and we went to bed. My dad got a ride home with Jared's family and luckily the awesome race director, Matt Gunn, had given the runners a 100k option to drop at Straight Canyon. We went to the finish the next day to see some of my dad’s friends finish and to get his cool 100k finish prize. My dad was so nice and he decided to give me HIS prize! That was a really nice thing for him to do! 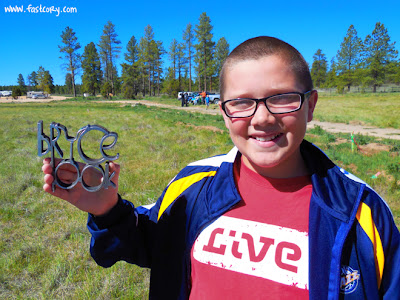 The Bryce 100 was a GREAT race! It was a VERY hard race but it was great! We were all surprised to see Mike finish after vomiting multiple times! 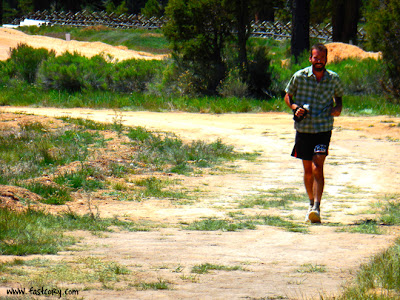 My dad did a very good job and also all of you guys reading this who paced or ran the race, GREAT JOB!!! Everybody thank Matt Gunn for all his hard work in making this race possible! Good job Cory!!!
Posted by Cory Reese at 8:11 AM