Merry Christmas and Happy New Year from the Reese family! We have had a downright awesome year (in large part due to the fact that Hostess went back into business. Their months in bankruptcy were a dark, solemn time in our household.) Admittedly, the year started off a little rough. Each of us caught a horrific stomach flu and Mel even ended up in the hospital. It was like swallowing an angry porcupine with rabies. Our house needed an exorcism to remove all the illness from our house in January.

I thought I’d share with you a few highlights from our year. My goal is simple. If at some point while reading this, you have the egg nog you’re drinking come out your nose, I have succeeded.

We got the Michael Jackson Just Dance Wii game last Christmas. This was a highlight because I get a certain amount of satisfaction in beating my children at Billy Jean. Early in the spring we built garden boxes in our backyard. We kicked ourselves for not doing this years ago. There is nothing like home grown vegetables. (Unless you count Costco pumpkin pie.)

This year our summer vacation was a trip to Salt Lake. We took the kids to Timpanogos Cave for the first time. It’s a pretty steep hike. Was the beauty of the cave worth the kid’s whining during the hike? Ask us in a few years. Kidding, we had a blast. The next day we went to Stadium of Fire for the fireworks show which was proceeded by a concert from Kelly Clarkson. I realize I’m risking my Man Card in admitting this, but I loved it as much as everyone else.

Our home experienced a complete remodel. Mel is the lovechild of Bob Vila and redid all the counters and cupboards in our house. And we got new paint and carpet. And….wait for it…..new furniture. In our fifteen years of marriage we have bought exactly zero pieces of new furniture. It has all been hand-me-downs or from classified ads. It’s strange to break in a new couch!

A few months ago we went to another concert by one of our favorite musicians Matthew West, then had the privilege to meet him afterward. Music continues to be a big part of our home. Here is a quick rundown on the gang:

Kylee is loving fourth grade. She is the peace maker in our house. She is always happy and willing to help. She has been busy with piano lessons and did a Broadway class earlier in the year. I think she is winning the school competition to see how many blisters someone can get on their hands from always doing the monkey bars during recess. She was in the community play Dear Edwina Jr. over the summer playing the highly acclaimed role of a napkin. Really.

Danica is excelling in fifth grade. She also did Broadway and had a part in the Dear Edwina Jr. play. She continued another year of piano lessons and is good at reading sheet music. She reads like nobody’s business and loves to draw and write letters. She is an expert at building fortresses with Polly Pockets and Barbies. She ran the Baker’s Dozen 5k a few weeks ago and sleeps with her medal every night. Yea, one of the cutest things. Ever.

Jackson is in seventh grade and is a peer mediator at the school. He has quite the musical gift and is the piano player for the intermediate school choir. The difficulty of the songs he plays baffles me and he was asked to play in sacrament meeting. He played city baseball and stays busy with Scouts. I loved going on some bike rides with him over the summer when he was working on the Cycling merit badge. The kids worked up to a 50 mile ride! A few weeks ago he ran his first half marathon ever at the Baker’s Dozen race.

Mel continues to be an awesome human. In April she went on a girl’s trip to Hawaii with her mom and sisters. She is still working as a nurse in the ICU at the hospital a few days a week. She also helps out a bit with home care and hospice which she loves. As mentioned earlier, she has become quite the home renovation specialist. This year she did something I never thought I’d see again – she ran the St. George Marathon! (In years past she has said “I’m NEVER doing that again!) Watching the way she finished was truly remarkable. We were able to share that experience with so many close friends. And Mel’s funny. And she can make some mean enchiladas.

I continue to work as a social worker for the University of Utah Dialysis Program which I love. I’m having a lot of fun doing the running thing. I ran six ultramarathons including three 100 mile races during the year. I got to meet one of my running heroes Scott Jurek. I’ve also gotten to know some simply incredible people through running; people who challenge and inspire me. I write and post pictures at www.fastcory.com.

Our big poodle Jack still looks like an enormous black Brillo Pad. I swear, this dog eats better than his owners. He is a MASTER counter surfer and will snatch anything off the counter when nobody is watching. We are enrolling him in Canine Weight Watchers after the holidays whether he likes it or not. Here are a few more notes from my journal this year:

January 4, 2013: We went over to Rach’s house for dinner. Jackson had stayed home to pack for a camp out. So the moment we walked into the house, we were welcomed by an enormous pile of what was once chicken noodle soup in the middle of the floor and our downstairs area wreaked of vomit. Apparently he had puked just a minute before we got home. Don’t worry – the dog cleaned up some of the noodles. That alone is highly disgusting.

The great thing is that Mel got called into work so she had to leave right away. So I got the pleasure of cleaning up the stinky, chunky puddle of once-chicken-soup and then sanitizing every possible surface of our household in an effort to try and prevent the rest of the family from catching the plague. (My other Welcome Home From Work gift was a clogged toilet.)

January 14, 2013 We drove up to Salt Lake Friday and decided to take a quick bathroom break at Cove Fort midway through the drive. So as we were standing there at the gas station I looked over at Dani and completely out of nowhere she spewed throw up everywhere. And then there was more launching as Mel whisked her to the bathroom. We almost made it to Nephi before she barfed again – this time into a bag while we were driving. And then when we finally got to Salt Lake she upchucked yet again. She was so distraught. As we were driving she said through her tears “I’m so angry at Jesus for letting me get sick again!”

February 7, 2013 A few nights ago I saw that the label maker was out and I could see Kylee playing with it. I told her to not print anything off so that she didn’t waste the stickers. Then she said “Uh oh, I already did.” I gave a little bit of a stern look, and then she showed me what she printed. The label said “DADDY IS MY HERO”. That may have made my eyes leak a little bit. I thought that was so sweet of her.

March 14, 2013 We got ambitious and had our first ever family campout in the living room. I pulled the girl’s mattresses into the living room for me and Mel to sleep on and then the kids set up little beds around us. We just hung out and watched an episode of the Cosby show and America’s Funniest Home Videos, and ate brownies and ice cream. As we were laying there going to sleep I couldn’t help thinking that this was pure happiness to be spending time with my wife and kids like this. It couldn’t have been better.

March 19, 2013 A few days after someone backed into my car, Mel and I were in the kitchen talking about how frustrated we were that we had to come up with $500 for the deductible and would have nothing to show for it. $500 for something so useless is a lot of money! So as we were talking about it, Danica left and went upstairs. She came down a few minutes later with a little baggie of coins. She said “Here, you can have this. Now you only need $499.” That was so kind and thoughtful.

May 23, 2013 A few nights ago Jackson asked if he could stay up a little later to do some stuff on the computer. I told him no, but then he said it was because he wanted to email his teachers and say thank you. I agreed to let him do this. So today Mel heard that one of these messages got to the principal, Mr. Christensen. He then forwarded that message onto the district. And the district then forwarded that on to The Spectrum. Wow! I was glad to hear that he wanted to do that. Telling people thanks and showing gratitude is a characteristic that I have always tried to make sure my kids adopt, so this made me happy.

July 31, 2013 Last Wednesday was Pioneer Day. We started the day off with the city 5k race which was a lot of fun. I ran the race with Kylee. It was funny, about a mile in she looked up and said “Dad – I can’t feel my legs. Can you?” She did really awesome and we finished in 40 minutes. We were the first ones in the family so I was able to watch the others finish which was cool. I laughed at how each of the kids jumped across the finish line.

August 5, 2013 We took a nap after church and Jack got into a bag of dog bones which led to me cleaning up four enormous piles of barf that looked like loads of egg salad sandwiches. Props to me for not throwing up.

We have been so blessed and are thankful for wonderful friends and family. Merry Christmas and may you have a positively awesome 2014! Love, Cory, Mel, Jackson, Danica, and Kylee Reese 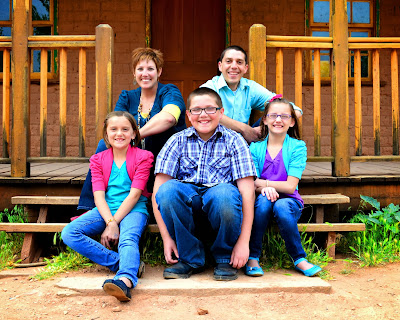