My Friend Josh Ran ACROSS Utah!

I've known Josh Bryant for many years. We shared some miles on the trails together during races and collaborated on crazy running adventures for a long time. Josh took his level of crazy to a whole new level by running across the entire state of Utah......425 MILES......for his 30th birthday!

Late night on January 22nd as he started his run at the Utah/Arizona border I went out to meet him and take him 1) a hug, 2) some high fives, 3) some encouragement, and 4) some high fructose corn syrup snacks. 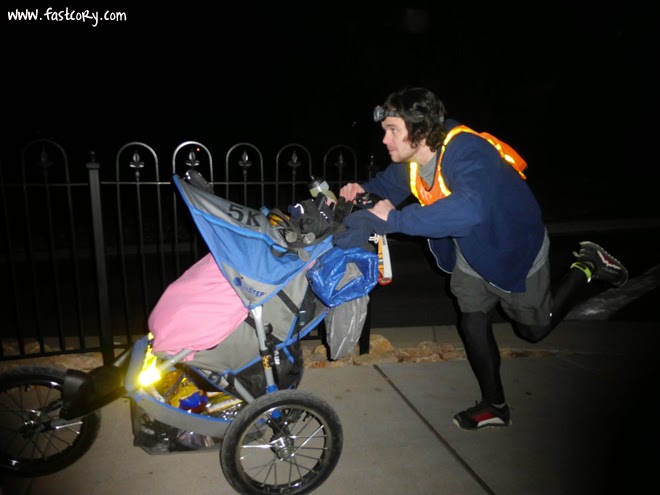 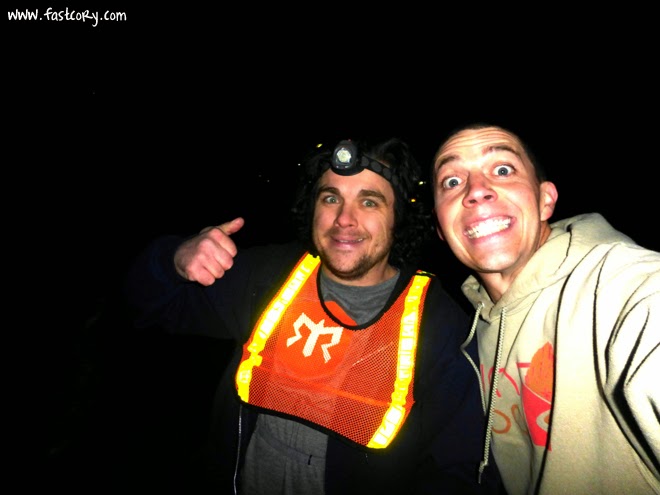 Josh finished his cross-state run in a little over ten days. I was impressed with his accomplishment and was interested in hearing more about the experience. Here are some questions I threw Josh's way and his responses. (The following pictures are courtesy of Josh.)

What inspired you to do something as crazy as running across the state of Utah?
I like to challenge myself and push myself to the breaking point.  The idea came to me last year on my birthday when I was running my birthday 100 around the Ogden area.  I first thought I would run 300 for my 30th.  I started planning it out and found my brothers house was 315 miles from my house, but then thought if I was to cover that much of the state I just as well cover the whole thing. 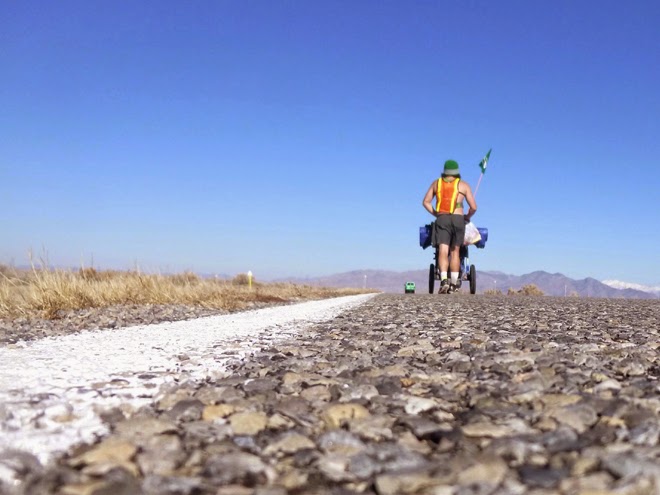 Describe your setup. You planned to do the entire run solo pushing a baby stroller of supplies. What gear did you bring with you? What things did you wish you had packed but didn’t?
I tried to have 4 basic bags: Food, Clothes, Emergency Supplies (first aid, extra tires, patch repair kit and rain gear) and Gear (headlamps, batteries, charging cables, hand warmers).  Plus some sleeping gear a small chair water and drink mixes.

One of the big misses while packing was a good light weight sleeping bag.  I tried to rough it with a wool blanket and a tarp.  It worked but I wasn’t comfortable and the rest I got was not as good as it could have been.  I also didn’t plan enough variation into my meals after the 3rd day I was wishing for something other than bologna, peanut butter or pizza.  I was going to bring my back packing stove and should have done that also.  Hot chocolate and a warm meal would have helped in a few lonely places. 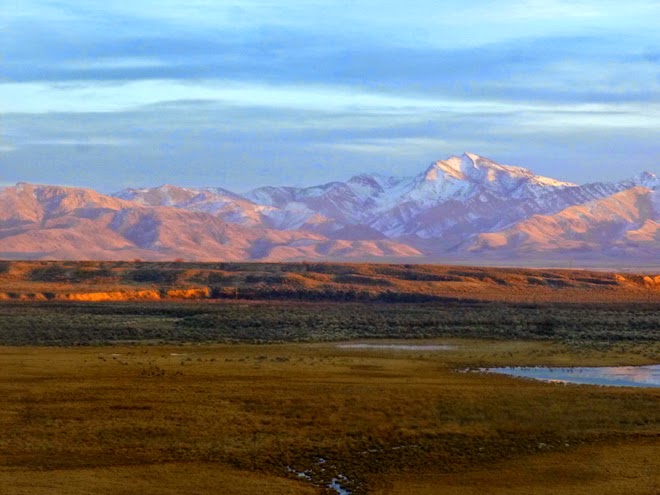 In an ultramarathon you experience the highest of highs and the lowest of lows. I assume that was exaggerated even more for a run like this. Explain what it was like going through the low points.
I only had 3 points where I felt completely miserable.
On the second day coming into Cedar I was about 10 miles out.  I was cold and had been cold all night and day from accidentally spilling water down my shirt and having a north head wind just chilled me to the bone early on the first night.  I felt like I wasn’t moving and was behind schedule.  I called and talked to my wife and told her I wasn’t sure if I wanted to ever continue. (Oops, a sheriff stopped Josh to make sure there wasn't a baby in that stroller he was pushing down the highway!) 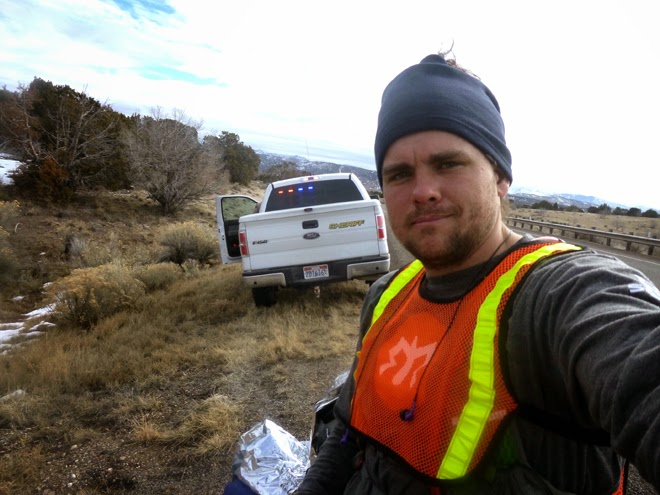 After leaving Delta I had a great day on the road.  I knock out about 25 before it got dark.  When it got dark though, it got cold. I kept moving trying to stay warm.  It wasn’t really working.  I wanted to keep pushing until I got cell reception again so I could let my wife know I was going to bunker down for the night but after a few hours I gave in and knew that I wasn’t going to be able to do that.  This was the part of the course that I was the most isolated and alone.  I pulled off the road ate a small meal then laid down for the night.  I was able to get about 4-5 hours a “good” sleep.  I woke up to a lite rain and got everything covered up in time for it to stop.  I still had 45+ miles until my next stop and no communication for about 20 hours with my family.  It was during this long stretch that I had one of many great examples of humanity though.  Todd is an owner of the gym I contacted in Delta to find a place to rest.  Todd and his wife were headed north and were kind enough to bring me some hot chocolate and words of encouragement.

The third low point also came after a good day.  After passing through Provo/Orem I really wanted to make it to Salt Lake City in one shot.  I had tremendous support throughout this area, but my right leg and ankle had finally reached a point I was only moving about 1 mile per hour.  This was a huge mental blow to me.  I called my uncle and he was willing to come and transport me to his house to get some rest and my foot looked at.  This was the first time I was riding in a car in about a week.  In the morning he dropped me off at the spot I was picked up at and I had what I consider my best of the journey the next day. 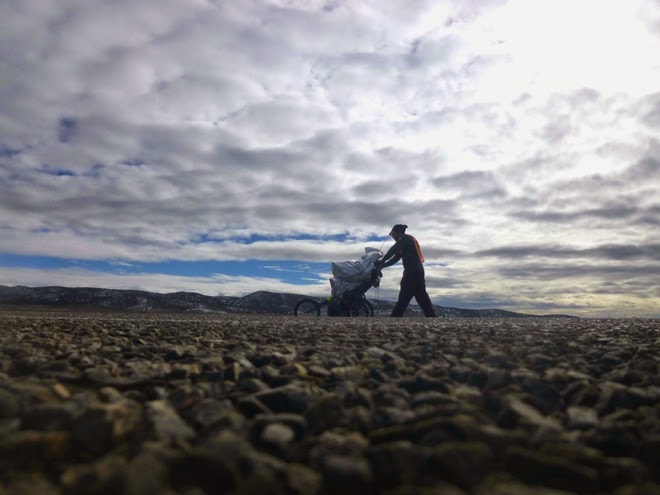 How did you get out of those low spots?
With help from friends and family I was able to pull myself out.  I knew going in it was going to be tough and I would be relying on them for these situations.  I have always loved and lived by what JFK said in his Moon Speech at Rice Universtiy:

“We choose to go to the moon. We choose to go to the moon in this decade and do the other things, not because they are easy, but because they are hard, because that goal will serve to organize and measure the best of our energies and skills, because that challenge is one that we are willing to accept, one we are unwilling to postpone, and one which we intend to win, and the others, too. “
I thought about that many many times out there.
(P.S. everyone should read this at least once….  http://er.jsc.nasa.gov/seh/ricetalk.htm)

What were some of your high points?
Seeing my Family on State Street in SLC after a week and a half was a great thing, I could really run again and I took off to them.

Somehow about ½ a mile from the Idaho border there was about 6 of us running it in, and in the sky to the right appears this giant bald eagle, just soaring across some pine trees.  I was in awe.  I think that was Gods way of telling me good job.  I will never forget that image in my head.

Is there anything that surprised you during the run?
The weather.  I had a tiny bit of rain.  For the middle of winter in Utah, how did I manage to get this great of weather?

I was surprised to see how big this became also.  I figured it would grab some peoples attention, but I had a few people asking for selfies in Salt Lake with me, bringing babies out to run with me.  It was fun and I am glad people got excited about it. 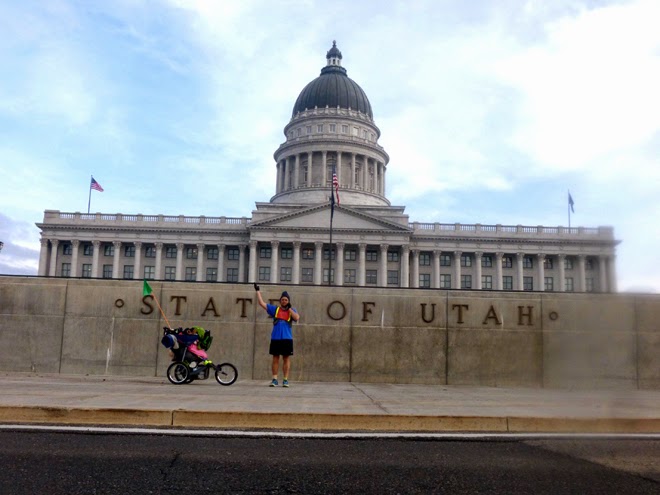 If you could travel back in time what would you have done differently in preparing for this adventure?
I would have changed my schedule I gave to my support houses.  I hate giving a time frame and not following it.  I would have planned 12 hour breaks instead of 8. I also would have liked to have my map, the couch wasn’t going anywhere.

What are your plans for the future?
World domination…

I don’t know what or when my next running adventure will be, but being home with my 3 kids and wife is my favorite adventure.  (Photo courtesy of Lori Burlison) 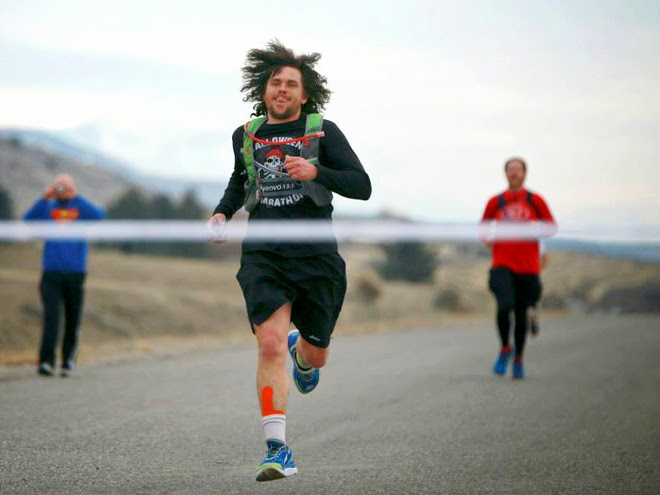