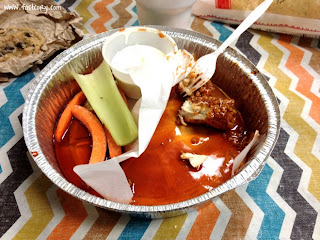 I hope you won't mind. Pardon me while I take a slight detour from running adventures.

So here's the deal. I work in a dialysis center across the street from the hospital. The close proximity to the hospital has a few benefits:

1) If I slip on the floor and break a hip while I'm trying to unclog the toilet in the patient restroom (which nearly happened last week), the emergency room is never far away.

2) The hospital has a cafeteria that I sometimes visit on days when I don't bring my own lunch to work. The food is reasonably priced and usually tastes good. Usually.

There was that minor mishap a few years ago when I got chili verde from the hospital for lunch. Within ten minutes it literally felt like I had ingested a Gremlin. An angry, venomous Gremlin with sharp finger nails and a raging desire to claw its way out of my stomach. I'm downright astounded that I ever went back to the hospital after what I shall call "The Gremlin Incident". (Now that sounds like a movie that needs to be made! I could see The Gremlin Incident topping the box office.)

So of course I chose to get the house sticky sauce again. Because who wouldn't want a dance party in their mouth? So I got back to work to enjoy my chicken wings. But this time was different. I sat down at the break room table. I literally got a bite of chicken a few inches from my mouth and then coughed because it felt like a wildfire was burning in my mouth. Even the smell of the chicken was like breathing in an inferno.

Then I took a bite. Once the blow torch chicken hit my tongue I immediately broke into a sweat. The sauce was delicious. Heavenly. But scorching hot.

Five minutes later my nose was running. And with my excessive sweating it looked like I had either 1) run 20 miles on a summer afternoon, or 2) eaten chicken wings from the hospital.

But the worst part.....the break room was crowded with coworkers! I tried to be unnoticeable wiping the sweat from my head. But you can only casually wipe your head so many times before people start to wonder if you are on the brink of spontaneous combustion. The whole experience was scrumptious and embarrassing.

Here's the kicker - I went back to the hospital two days later and they were serving the same chicken wings again. I had this internal conversation with myself. "Yes! Chicken wings again! But they are like chewing on dynamite. And you take the chance of sweating nine gallons of fluid IN FRONT OF YOUR COWORKERS again. But they are so delicious. But do you really want to be embarrassed again? And maybe that guy should have a hair net around his beard."

After standing in the cafeteria listening to this conversation taking place in my brain I walked up to the counter. "One order of chicken wings with the house sticky sauce please." I fully expected that I would have to sign a waiver acknowledging that I understood the risk I was taking.

My lunch break played out EXACTLY like it had two days prior. Breathing fire. Runny nose. Profuse, humiliating sweating. All I could think to do when coworkers looked at me with beads of sweat on my face was to smile and think to myself "It was worth it." 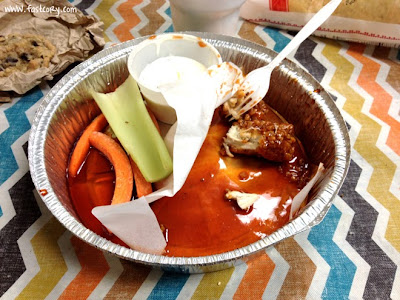