HEALDSBURG, CA - Southern Utah hobby jogger Cory Reese recently finished the Lake Sonoma 50 mile race in northern California. "I heard runners get cool jackets and homemade tamales at the finish line, and I really like tamales", said Reese in the days leading up to the race. He did indeed receive a jacket and tamales, but not before facing tremendous adversity. 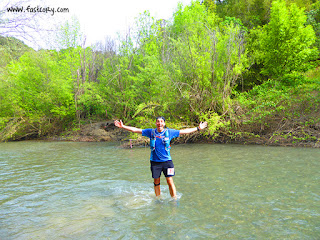 His Lake Sonoma tamale quest began two days before the race when Reese and his wife Melanie arrived in California. The first place on their itinerary was the Golden Gate Bridge, with a gift shop that should sell t-shirts saying "Good Luck Trying To Find A Parking Spot Anywhere Within 4 Miles". 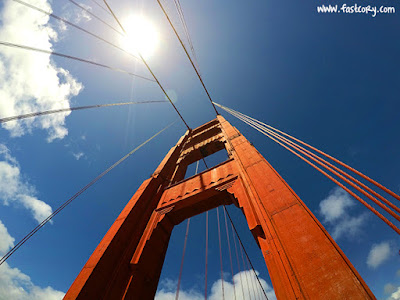 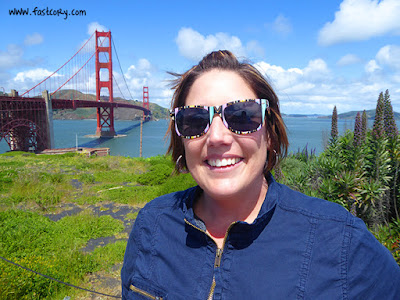 The couple enjoyed walking all the way across the bridge and back. Reese later admitted "I needed to get some form of physical activity to help justify the basketball-sized chocolate chip cookie I ate with lunch." 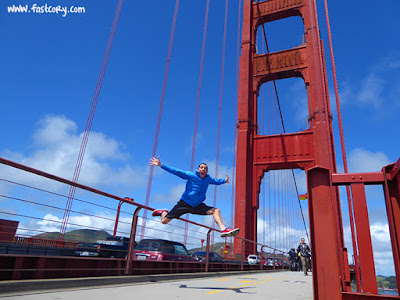 They then traveled further north to Healdsburg, California where they had been graciously invited to stay at the guest house of race director John Medinger and his lovely wife Lisa Henson. "There were so many highlights from this amazing weekend, but undoubtedly one of the top highlights was being able to spend time with Tropical John and Lisa," Reese said. "They are so funny and so kind, and we feel honored to call them friends." 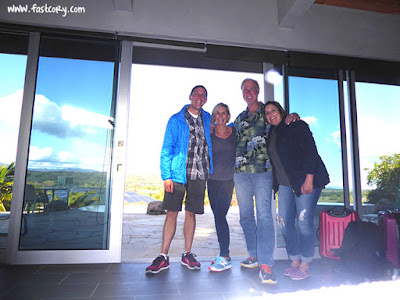 Upon seeing the views from the house, the Reeses promptly informed their hosts that they would be moving in permanently. 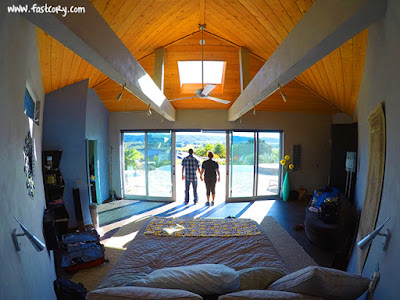 The day before the race, the Reeses enjoyed a relaxing afternoon walking the streets of Healdsburg, meeting new friends at the pre-race dinner, and taking a quick dip in the pool. 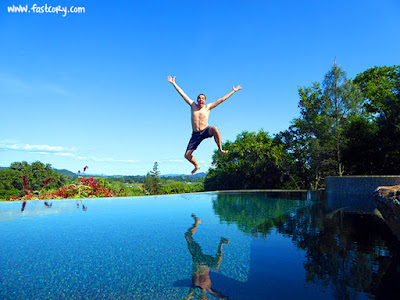 Before the race, Reese confessed that he was apprehensive about the Lake Sonoma 50. "I just ran the Zion 100 a few days ago. My legs are still pretty stiff and sore, and Sonoma has almost as much climbing in 50 miles as Zion has in 100 miles. I'd say I have a 94% chance of crying during this race." 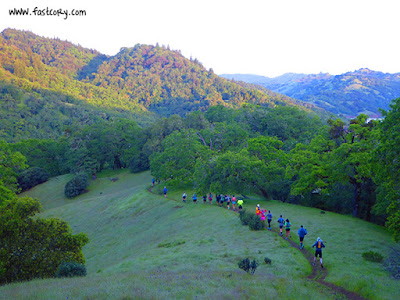 Once the race started, Reese was overcome with amazement at the beauty of his surroundings. "I can already tell this race is going to be hard for me to keep my camera in my pack", he said at mile 4. 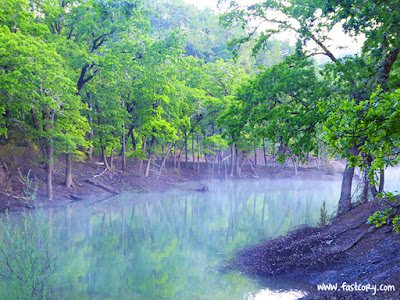 The stunning views made him completely forget his sore legs...for at least a fourth of a mile. 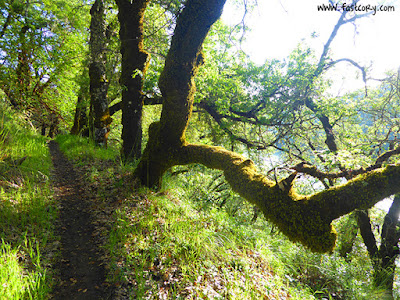 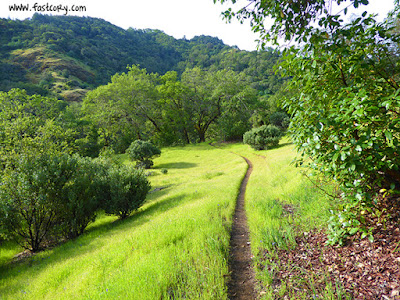 Unseasonably high amounts of rain made many trails muddy, and some sections became the adult version of a Slip And Slide. 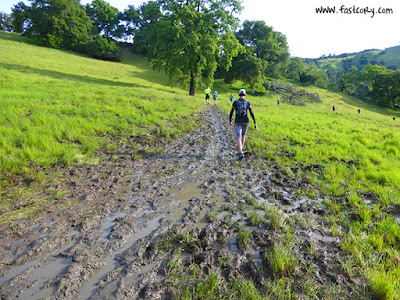 Controversial allegations have arisen that Reese fakes all his runs. When asked about these harsh allegations, Reese laughed and said "If my runs were faked, I'd like to think I'd give myself faster finish times. I'd be happy to show you the 142 pictures I took during the race to prove that my wiry chicken legs have traveled every mile of the course." Upon inspection, Reese did indeed take 142 pictures during the race, implying that maybe he should run more and take less pictures. "With scenery like this, I just can't help myself," he said. 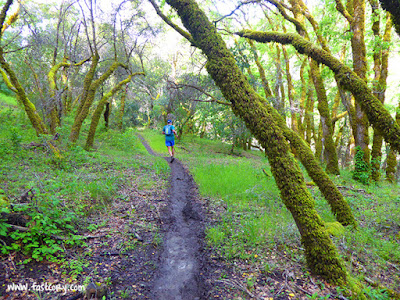 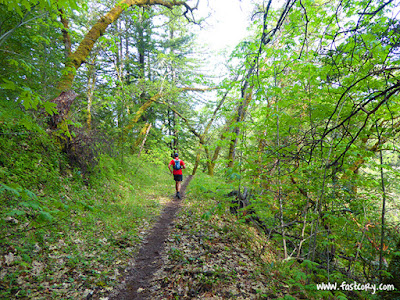 Damning evidence of Reese's jumping abilities (or lack thereof) was spotted at the end of the race when he caught approximately one inch of air in his "jump" across the finish line. His saving grace was this mid-race jump captured by the official race photographer. 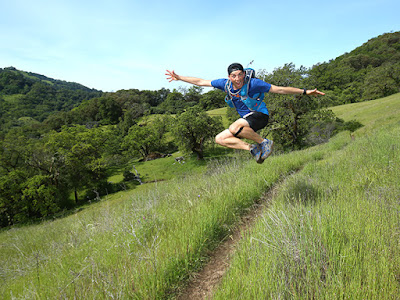 Reese was pleasantly surprised to see Gordy Ainsleigh volunteering at an aid station. Ainsleigh is the original pioneer of the 100 mile run - the first person to run 100 miles and show that humans are capable of this insane feat. 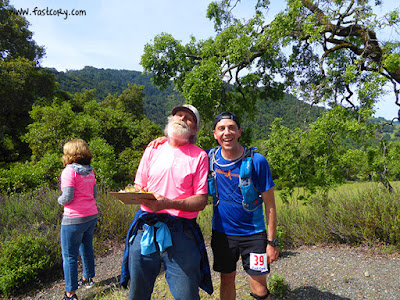 Reese's wife nervously waited at the 25 mile turnaround point of the out-and-back course. Reese was a half hour ahead of the cutoff and only stayed at the aid station long enough to take a quick picture and refill his hydration pack before leaving again. Melanie later posted a picture on Facebook commenting "Tons of rocks in his shoes, muddy as hell and currently in the pain cave, but he still has a smile on his face!" 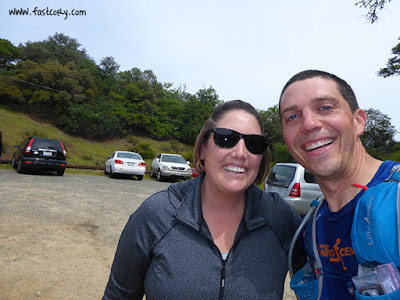 Runners struggled on the return climbs and Reese quickly realized that he wasn't the only one who had reserved space in the pain cave. Hands on hips are a sure sign of pain cave occupancy. 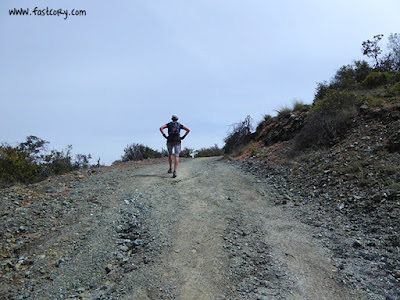 "My biggest problem was that my legs still felt zapped of energy from the Zion 100," said Reese. "I just didn't have much oomph." He pushed forward enjoying the views and the variety of wildflowers blooming all along the trails. 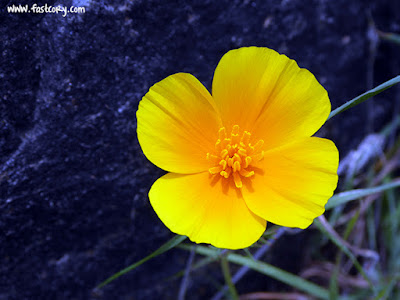 The course boasted countless river crossings. "I was nervous about this before the race," said Reese. "Living in the desert, we don't have obstacles like this." Yet Reese was still managing to defy all odds. Despite the river crossings and oomph-less legs, he had not burst into tears or resorted to curling up in fetal position on the side of the trail and sucking his thumb. 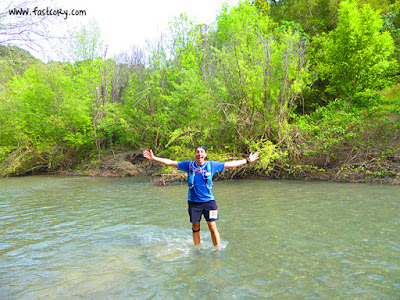 Around mile 45, after more climbs and more mud, Reese finally began to feel a bit of confidence that he'd be able to finish the race before the cutoff. 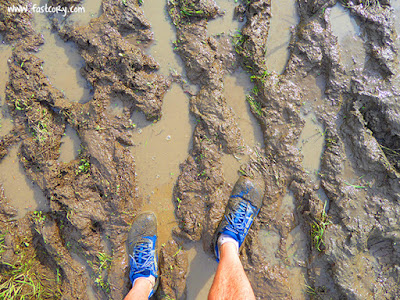 The clock at the finish line ticked 13 hours 41 minutes as Reese made his one inch jump across the finish line, narrowly avoiding the final cutoff by 19 minutes. Mud-covered legs, a near-dead camera battery, bags under his eyes, and a ravishing appetite for tamales were evidence enough to prove that Reese's run was far from faked. His Lake Sonoma adventure concluded with hugs from his wife and friends, a new finisher's jacket, and the satisfaction of pushing hard to achieve a goal. ~ ~ I can't recommend the Lake Sonoma 50 highly enough. The course is tough and challenging, but the trails are buttery smooth and runnable. They are undoubtedly some of the most beautiful trails I have ever run. Thank you John and Lisa for a truly unforgettable weekend!

Here's a video I put together if you'd like to see more of those 142 pictures I took during the race: