Running 100 Miles On A Cruise Ship!

I inhaled two ice cream cones like a vacuum sucking up dust bunnies. Then I kissed my wife and walked to the running track on the deck of the Ruby Princess cruise ship. And then I clicked the Start button on my Garmin to begin what I hoped would be a 100 mile run on the deck of the ship. 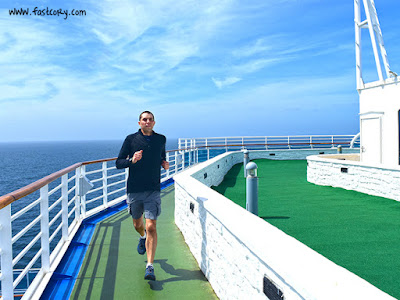 Why attempt a 100 mile run on the first day of a vacation? Well, mainly because that's the only opportunity I could think of to vacuum up as many ice cream cones as I want while running 100 miles. Thus far, none of the trail races I've done have had an all-you-can-eat ice cream machine at any aid stations. This was my view for many, MANY more hours to come: 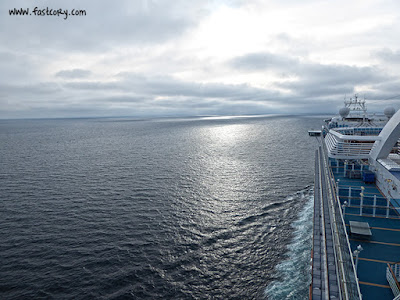 Some creative friends came up with some great names for the run. Some of my favorites were:
We were on a California Coast cruise. We went with our friends the Coopers and lots of their extended family. This was a bonus because they were more than willing to be an informal aid station. Every once in a while people would kindly bring up some food or water or ice cream. 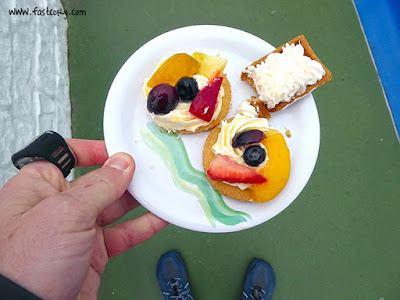 The first night and day were at sea. I didn't feel like the run took away from family time much. Mel was happy as a clam hanging out and visiting with friends. And my kids are teenagers so it's safe to say that hanging out with dad probably wasn't at the top of their priority list. But the running track was right next to the basketball court where they spent a lot of time so we saw a lot of each other. 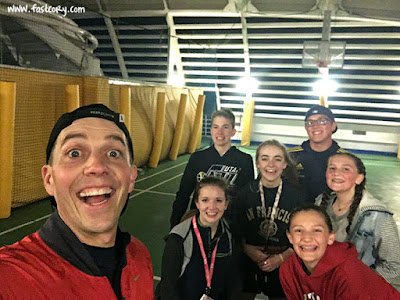 Plus the kids were awesome about bringing snacks whenever they got bored. 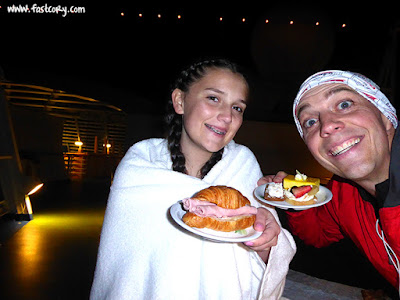 The night was bitter, BITTER cold and it was so windy that it felt like trying to run inside a tornado. During the night whenever Mel brought up some food, she would stay out just long enough to hand me a plate, and then would dart back into the warmth. I didn't expect that it would be this cold so I didn't have as many layers as I would have preferred. 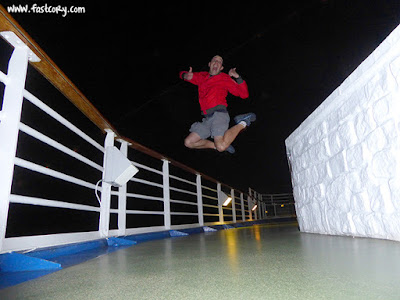 At 3:30 a.m. I was freezing cold and a fierce wind was tossing me around the track. If you think a gale force headwind is miserable, don’t worry. In 20 feet it will be a tailwind. Which will momentarily be blowing you sideways before becoming a ferocious headwind again. I hadn’t seen anyone for hours. And then a worker showed up with a hose. He told me he had to clean the track and I could come back in an hour. I concluded that to continue my run, I’d need to succumb to some miles on a treadmill for an hour. I wanted nothing to do with Satan's Sidewalk, but I didn't know what else to do. Then I realized that the fitness center was closed. In an act of desperation, I ran up and down the long hallway of the cruise ship for an hour. 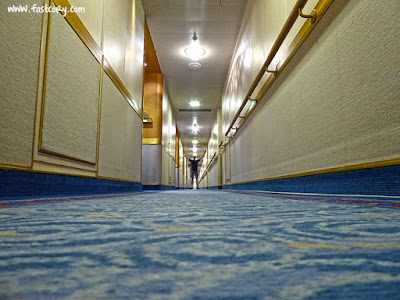 The absurdity of this scene was not lost on me. Fortunately I’m a licensed clinical social worker so I was able to give myself therapy for the trauma I was putting myself through. Eventually I headed back to that hamster wheel of hell called the running track.

Let me tell you about this hamster wheel of hell. The surface is hard steel. (As opposed to soft steel??) Do you know what feet and knees and legs don't love? Hard steel. And it takes 16 loops to make a mile. SIXTEEEEEEEN. To make this sound infinitely more heartbreaking, that means it takes 1,600 loops to make 100 miles. If that doesn't make you throw up in your mouth a little bit, nothing will.

By the time the sun came up, I was around mile 52. I was convinced that we had been tricked into getting on a cruise to the Antarctic. #imnotrobbingabank #isthisworsethanprisontime #sanityoverboard 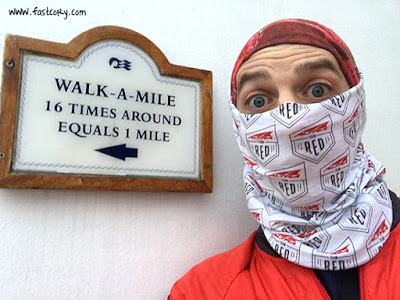 In the morning our friends Henry, Sid, and Mandy brought me an omelette and waffles that tasted like they had been made by the hands of angels. This may have been the only point in my life when I was so cold that even ice cream didn't sound appealing. 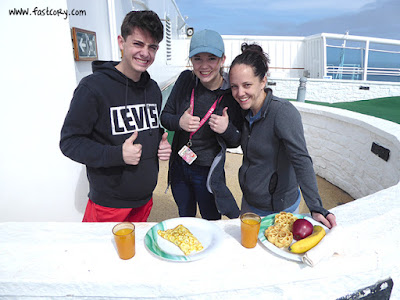 Around mile 72 I learned that Princess keeps an imaginary pain cave on board. This pain cave is worse than listening to Celine Dion's "My Heart Will Go On" played on repeat. Now that's saying something. What made the pain cave even more of a mental challenge was looking down at the pool and seeing people relaxing with their drinks and books and happiness. Their eyes weren't looking glassy with big bags underneath them like my eyes were looking. Mel came up to join me for a few miles which helped minimize the sleep walking. 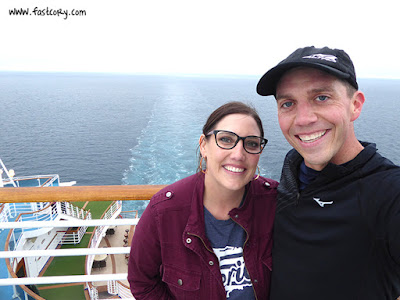 I actually felt fairly decent overall and ended up running the second half faster than the first. I don't think I've had a negative split during a 100 miler before. Finally after 27 hours and 47 minutes I finished the 100 mile run. My family was there with a belt buckle that we brought along just in case I finished the run. I basically love it. 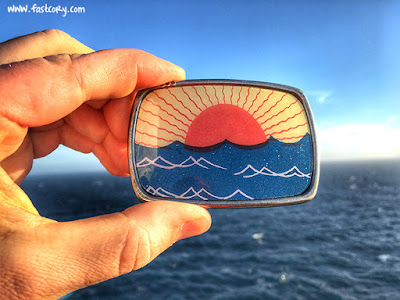 I'm not aware of anyone running a 100 miler on a 1/16 mile loop of a cruise ship before. After this experience I think I understand why. I can say with certainty that I underestimated how challenging it would be, both mentally and physically. I used a Garmin foot pod to track my distance because I knew GPS wouldn't work on a moving ship. You can see my Garmin data HERE. Just for fun, I started Strava for my run as well. You can see that data HERE. I love how the route looks like I ran across water. 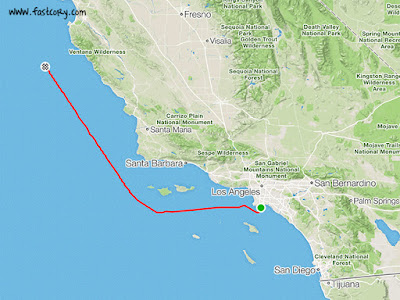 The brutal part was that after finishing the run, I had around 7 hours to sleep before we needed to get up for the adventures we had planned for the day, which included Alcatraz: 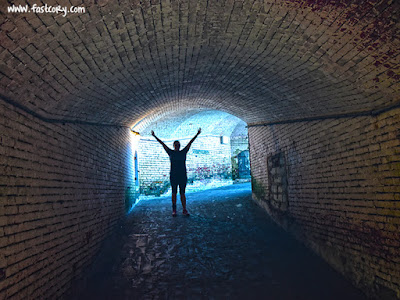 And heading over to the Golden Gate Bridge: 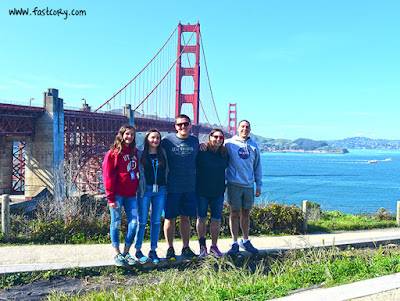 Though I was stiff as a board trying to walk around, I think all this walking around was incredibly helpful to loosen up my tight muscles. Two days later, I had absolutely no soreness and felt like I could run again if I wanted to. (I didn't.) I credit the lack of soreness to all the walking around we did. 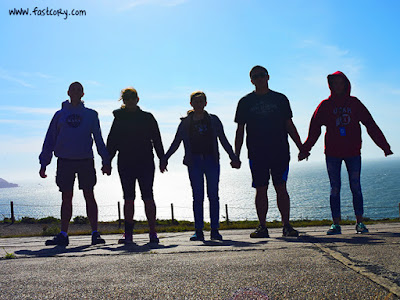 I got to enjoy lots of family time for the rest of our vacation as well. We saw some awesome stuff in San Diego, Ensenada, and Monterey. 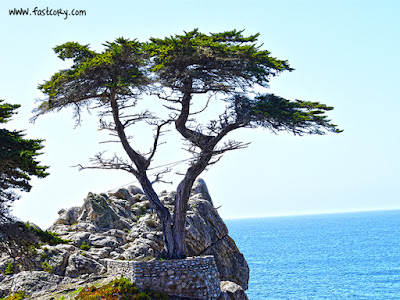 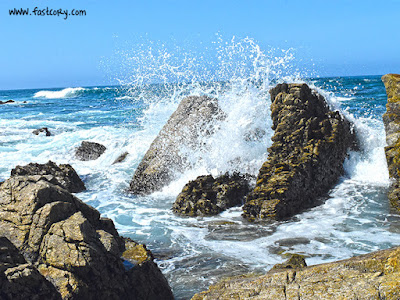 In Monterey we caught this jumping picture. It only took 13 tries to get a shot where we were all up in the air. 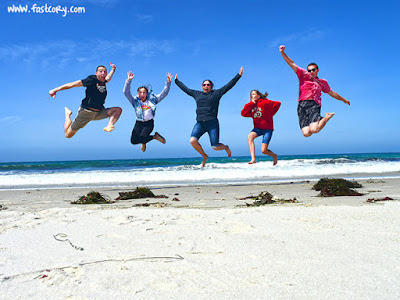 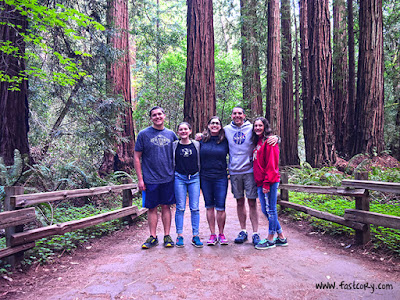 Come to think of it, I'm pretty sure this is what heaven will look like. Except that there will be a trail side all-you-can-eat ice cream machine.
Posted by Cory Reese at 8:06 AM