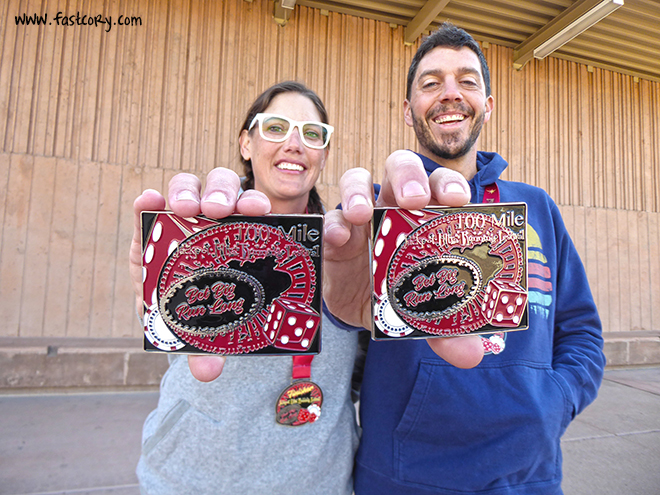 My wife is a smart person.

So I have no idea why, after everything she has seen me go through, she would willingly choose to register for a 100 miler. And then she suggested I could run it with her. The only logical explanation I have is that she must have been high on LSD or something when she came up with this idea. But I agreed that this could be a fun adventure, so we registered for the Jackpot Ultra Running Festival in Las Vegas.

We ran hundreds of miles together over the past few months to train for the race. Then this past weekend was time to race. The Jackpot course is a 2.5 mile loop around a wildlife preserve and we signed up for the 48 hour race hoping to complete 100 miles within that time frame. Our daughter Kylee came along to run the 48 hour race also.

From the very start of the race, the wind was kind of like that scene in Wizard of Oz where Dorothy's house gets picked up by a tornado. Thankfully no Terriers were on the course. Otherwise they would have been carried to a different time zone. 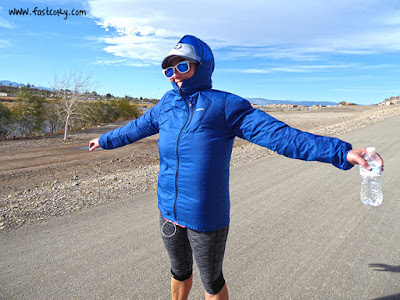 Around mile 20 I started to feel discouraged and frustrated. This is the first time I've tried racing since being diagnosed with Common Variable Immunodeficieny Disorder. (HERE is a blog post I wrote this little adventure.) A few days before the race, I had an immunoglobulin infusion in my leg and it was already acting up early in the race. I'll admit my eyes may have had a little moisture and I started feeling sorry for myself. 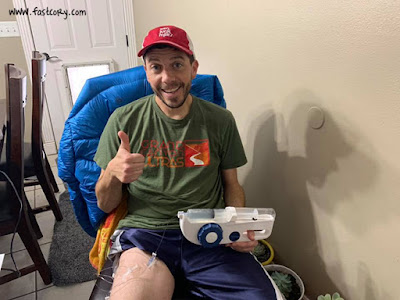 Thankfully my leg mellowed out after a few hours and wasn't quite as sore. I really wanted to be able to run every step of Mel's first 100 miler with her. 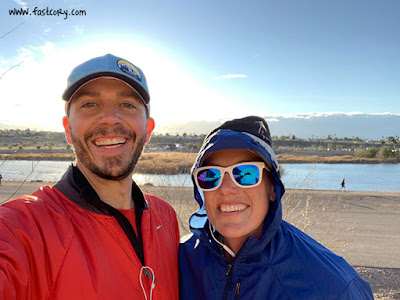 The course goes around a lake full of ducks and geese that honk incessantly. All day and night it sounds like someone is riding behind you on a bike repeatedly squeezing a bike horn. You can't help but laugh. 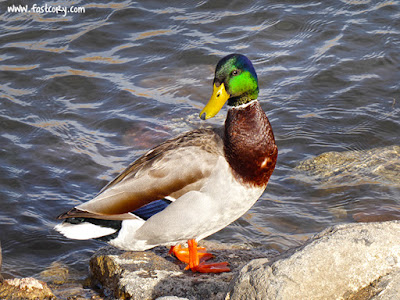 The wind advisory continued all day and into the night. It was windy as hell. I used to think of Hell as more of a fire and brimstone kind of place. But after this experience I'm convinced that in Hell, wind just howls relentlessly (while Celine Dion music plays over the loud speakers 24/7). 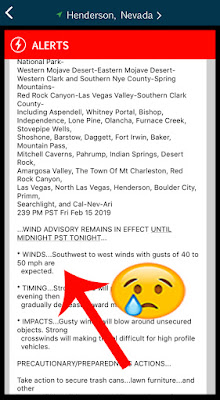 As the sun set, I could hear Mel humming some music. I asked what she was listening to. She said "I'm listening to a book on Audible, but I really need some music, so I'm humming 'Maneater'." 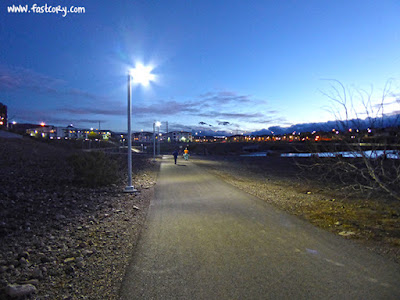 During the first night we decided to take a little break and sleep for an hour or so. We did end up laying down but neither of us were able to sleep. Why? Two reasons. 1) Our legs felt like they were being squeezed in vice grips. And 2) The hellish wind. I remember going to Universal Studios as a kid. On the studio tour, the bus went into a large building, then the lights went out and King Kong showed up and shook the tour bus back and forth. That's kind of how our camper felt as we tried to catch a bit of sleep. 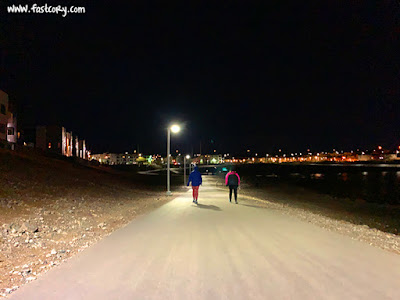 Unfortunately Kylee was starting to develop some Toyota Prius blisters. We helped her take care of them the best we could, but it was clearly making the miles more challenging for her. 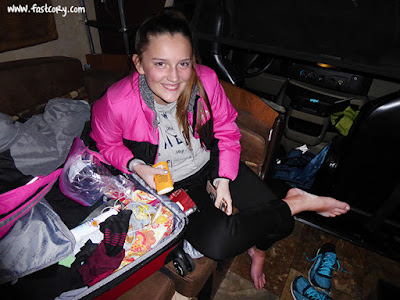 Sometime in the middle of the night we decided to get a picture together and try to make it look like we were having fun. 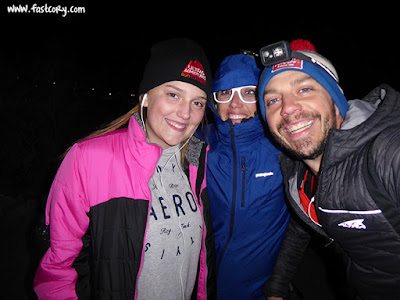 A few miles later Mel sat down to dump some rocks out of her shoes. Kylee immediately turned the cement into a bed and took advantage of the 1 minute of rest. 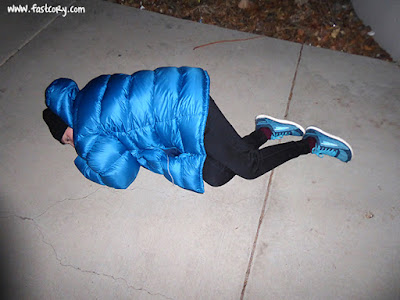 We hit mile 50 and Mel felt like she was in a boxing match with Mike Tyson. I tried to raise her spirits by doing a celebratory victory dance. You'll be shocked to learn that I have never had a single dance lesson in my entire life!

The night of ultramarathons is always so difficult. The exhaustion and fatigue always catch up to you. But if you can keep going until the sun comes up, you almost always start feeling better. Thankfully that was the case for us. 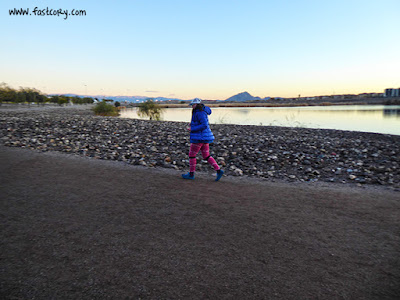 I couldn't help but stop to take a jumping picture at the 24 hour mark. 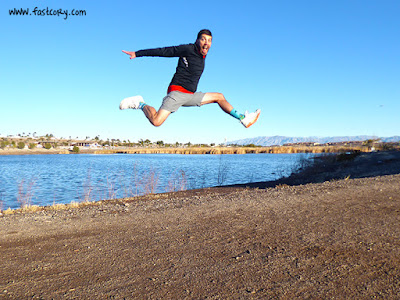 One of the things I love most about races is the people who I get to share miles with. I am particularly inspired by people who don't fit the stereotypical runner mold. I'm inspired by people who have to fight because the miles don't come easy. I love when people who are a little older, or a little heavier, or a little slower still take on the challenge to race. Take for example my friend Gene Defronzo. Gene is 83 YEARS OLD and ran his 745th LIFETIME MARATHON at Jackpot! The guy is a true legend. Who says age has to be a limitation in running! 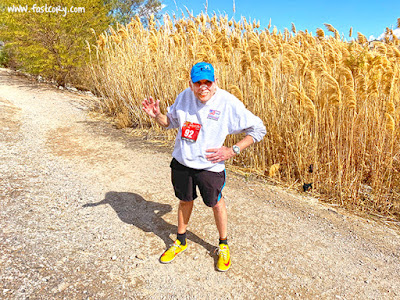 On the other side of the spectrum, Jackpot also hosted the USATF 100 Mile National Championship so we got to see elite runners speeding around the loop. Altra runner (and one of the nicest humans on the planet) Mark Hammond won the USATF 100 miler in 12 hours 58 minutes, averaging 7:46 per mile. I can't run one mile at that pace. Simply, simply incredible. 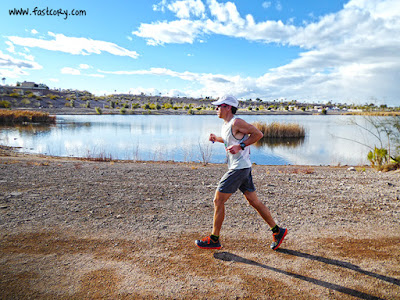 Meanwhile, Mel and I kept plugging along. Mel was going through a low point when my friend Robert Manon passed by. He talked to us for a bit and told Mel "It's crazy, you'll feel horrible, and then you'll get a second wind, and later a third wind, and later a fourth wind. Just keep going and you'll start feeling better." Once Robert left, Mel told me she thought he was psychotic. "A fourth wind? Yeah right." Sure enough, about a half hour later I was sprinting to keep up with Mel. 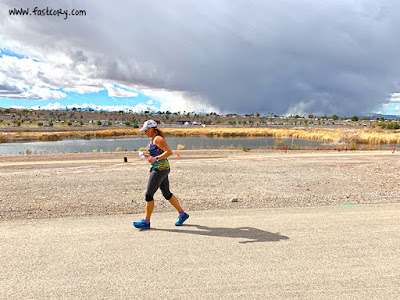 But what goes up must go down. Eventually another bonk came. Mel was stuck in a bonk for hours. This is the side of ultramarathons you don't see as often. For more than an hour quiet tears streamed down Melanie's face. We were around mile 70 and she said "I'm not sure I can do this." Around mile 70 is always the hardest part of a 100 miler for me. You've come so far, but you're so tired and spent that another 30 miles feels insurmountable. Emotions get fragile. Mel apologized for crying and said "You never cry during your races." I smiled and said "I wouldn't be so sure." This is the point when the race gets real. You dig deep and keep moving. And you discover that you're capable of more than you imagined. 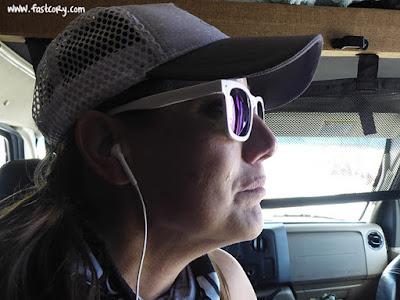 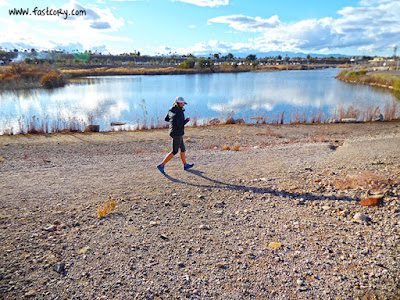 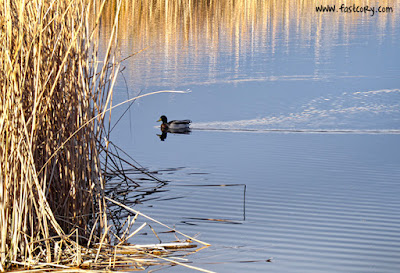 Mel had the usual highs and lows. During one of her low points she said my favorite line of the race. "Your pep talks aren't working right now." There were a few more tears, but I knew she was pulling out of it when I heard her start humming. Maybe it was the song "Maneater" again.

Around mile 80, Mel came alive. She could smell the finish line and she started to push. And then at mile 90 she got that 4th (or 14th) life that Robert Manon had mentioned. She ran as hard as she did at the beginning of the race. It was such a beautiful thing to watch. I was both inspired, and panting from trying to keep up with her. And then a miracle happened. We reached mile 99! Mile 99!!! 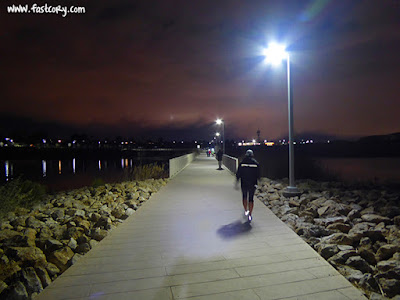 And then....we made it to the finish line! MEL FINISHED A 100 MILER! We were overcome with happiness. I was so proud of Mel, not just for the accomplishment, but for everything she pushed through to get there. I truly can't fathom that this actually happened. I ran a 100 miler with my wife. It doesn't seem real.

At the finish line, RD Ken Rubeli handed me a belt buckle and said "Here. I think you should present this to her." I got down on one knee and gave her the medal. She said yes! Ken took these photos: 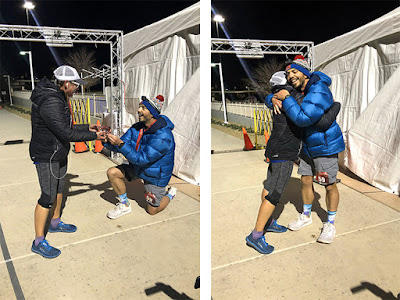 But that's not all. Kylee finished a remarkable 50 miles! Considering the challenges she had with blisters, I have no doubt that her miles toward the end were harder than ours. She is so determined and has learned early in life the strength that comes from overcoming adversity. 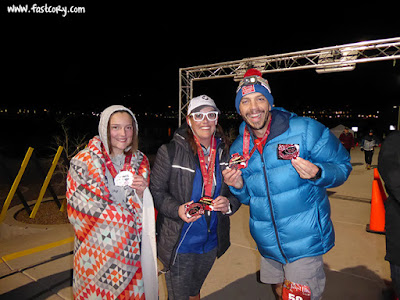 After 40 hours and 17 minutes, Mel became a 100 mile ultramarathon runner. I finished my 33rd 100 miler. And we became the proud owners of some belt buckles. 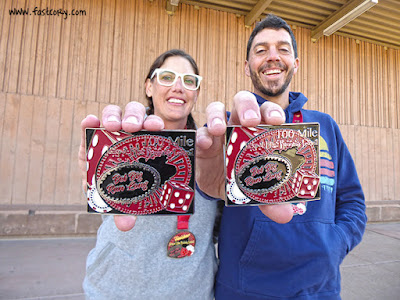 Ken and Stephanie Rubeli put on great races. Go check out their website HERE and run one of them. They are good people, and a huge asset to the running community. I'm so thankful for my sponsors St. George Running Center, Altra, Tailwind Nutrition, Injinji, and UltrAspire.

T.S. Eliot summarized our race - and running - perfectly: "Only those who risk going too far can possibly find out how far one can go."

Will it be easy? No. Will it suck sometimes? You betcha. Will you pray for a visit from the merciful angel of death? Probably. Will it be worth it? Without a doubt. 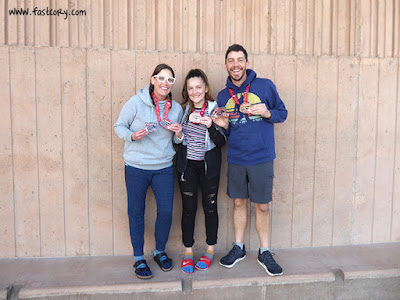