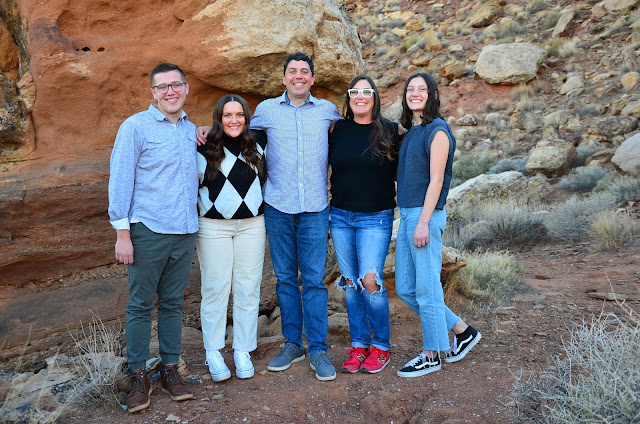 Hello friends and family! We wanted to wish you a Merry Christmas and happy holidays from the Reese family. This time of year, you can safely predict an obsession with pumpkin spice, obnoxious arrangements of Christmas songs from Mariah Carrey on the radio, and grocery stores becoming so crowded that they trigger anxiety attacks. You can also safely predict the Annual Reese Family Christmas Letter. 2022 was quite the adventure for our family. Here's a brief rundown for you.

Kylee
Ky graduated from Hurricane High School in May, and became an official adult in July. I'm honestly not exactly sure how this happened. I swear it was only last week that she was playing with Barbie dolls and decorating bedroom walls with a Sharpie marker. While in high school, Ky began the 1.5-year Graphic Design program at Dixie Tech. She's on track to graduate this April. The projects she has been working on, including illustration, animation, photography, and web design have been incredible. She is a seriously talented artist. Kylee has had a paralyzing fear of needles her entire life. But with ANOTHER knee surgery on the horizon, she decided to face her fears. I worked with her on some therapy exercises, and by the time her surgery date arrived, she was able to get her blood drawn and get an IV. You have no idea how huge this is. In November, she had her fifth knee surgery at Primary Children's Hospital, and the doctor said it went great. (We were able to sneak in an impromptu Lizzo concert the night before surgery.) Thankfully, she is now on the road to recovery following her sledding accident two years ago. She continues to work at Bumbleberry near Zion National Park while she is going to school. This year, she graciously allowed our Great Dane, Little Debbie to start sleeping on her bed with her. Debbie now assumes that this is HER bed, but will usually permit Kylee to have a small sliver of the bed to sleep on.

Danica
Dani spread her wings this year, moving out of the house and into a dorm with some new friends. She is currently in her sophomore year at Utah Tech University in the Bio Science medical program. Over the course of the year, her class projects included dissecting a squid, a frog, a lobster, a fish, a shark, a starfish, and a pig. Pardon me while I run to the bathroom to dry heave. Okay....I'm back now. She played water polo every year of high school, and is now playing on the school team which she loves. She is also Vice President of the college water polo team. I don't know exactly what the duties of this position entail, but I can only assume she is in charge of tasting the pool water before each game to ensure adequate chlorine levels. Earlier this year, she took advantage of an amazing opportunity to travel to Guatemala with a friend to participate in a medical service mission, where she made friends with other medical students from all over the world. While on the trip, she was able to practice her Spanish speaking skills. In fact, this year she reached a 365-day streak of Spanish lessons on Duolingo. I seriously admire her persistence and determination. She had tickets to see Elton John's last concert in Las Vegas a few months ago, but unfortunately had to miss the show because of complications with her celiac disease. She did manage to go to Aerosmith and Reggae Riseup though. She somehow survived working the holiday season at Target, but is thankfully set to begin a new job at Ovation, a brand new assisted living facility in the area.

Jackson
Jackson is in his senior year of school at Southern Utah University. He will be graduating in the spring with a degree in Chemistry. Among his current classes, he has courses in biochemistry, medicinal chemistry, and analytical chemistry. (Apparently you can put any word before the word “Chemistry” and call it a college course.) Every time he tells me what he’s learning about in his classes, I have to actively resist my eyes glazing over because I can’t understand anything he is talking about. His goal all throughout college was to set himself up to be in good condition to apply for medical school. After a year of rigorous studying for the MCAT (the placement exam for medical schools), he took the test a few months ago and totally rocked it. He’ll start applying for medical schools in the spring. He has also been really involved in volunteer work for Southern Utah University’s Healthy T-Birds Coalition. In March, he was part of the first group of people who were allowed to shadow medical providers in clinics throughout the Navajo nation, and was also able to participate in a lot of their cool cultural activities. Earlier this year, he released his first piano album called “Fresh Page.” Go check it out on Spotify or Apple Music. It is absolutely stunning. Somehow, in his miniscule free time, he is already writing music for his next album. He continues to be obsessed with the Utah Jazz, World Cup soccer, and destroying me at pickle ball.

Mel
Mel has somehow managed to continue her 44-year long streak of being seriously awesome. She has been the project manager for some gigantic construction and landscaping projects we’ve had going on in our yard over the past year. The first major project we finally completed was getting a pool in the backyard. We had been on a waiting list for almost a year and a half. Mel loves the water so much that I swear she has gills, so she has been in seventh heaven. She has also transformed our back yard around the pool into a true oasis. But the second gigantic project that she spearheaded is a new tiny house in our back yard! We bought a shipping container and Mel oversaw almost all the work that was needed to transform it into a sweet tiny home that we plan to rent out. At various times throughout the year, our yard has looked like it was nuked by North Korea. But as of this month, it is FINALLY done and it looks incredible! I am so proud of everything she has pulled off. I think she finished both seasons of Ted Lasso for the third time. In April, we traveled to Minneapolis to see one of our favorite musicians, Trevor Hall. We were ecstatic to be in the right place at the right time after the show and were able to meet him. Then, we made a spontaneous trip with friends later that month to Colorado to see him again at Red Rocks Amphitheater. Then we traveled with friends to Salt Lake to see him again last month. We clearly have issues. She continues to work as a nurse practitioner for Intermountain Healthcare. I regularly hear from our mutual patients what a great medical provider she is.

Cory
I am just about to begin my 19th year as a dialysis social worker. Over the past year, I’ve been able to grow a thriving private practice on the side doing therapy. Being able to help people work through hard times is something I love so, so much. In January, I spent a week in Kentucky doing an intensive training to learn EMDR. This form of therapy has completely revolutionized the way things like trauma, depression, and anxiety are treated. In June, Mel and I went on vacation to Austin, Texas where I gained 8 pounds worth of tacos. I’ve been writing a little bit of piano music, but currently I’m working on learning a piano arrangement of Toto’s song Africa. I can only imagine that playing this song on the piano will immediately make me a babe magnet. (Or not.) (Don’t worry, Mel.)  For the first time in 14 years, I didn’t run a single race the entire year! I really miss racing though, and have a few on my radar for next year. A few other concerts I didn’t mention earlier: Mel and I loved Reggae Riseup in October. We also saw Imagine Dragons and Macklemore in concert with a great group of friends in Vegas. We both absolutely LOVE Macklemore. You can’t imagine how shocked we were while sitting out on some couches before the show, when suddenly….out of nowhere….Macklemore showed up in our portal to say hello! We got pictures taken with him, and I can’t confirm this for certain, but I think I heard Mel whisper to him “I want to have your baby!”

Earlier this year we had to let our big, fluffy poodle, Aunt Jackie go to the great dog park in the sky. We miss his cold, wet nose digging into our arm for a pet when we’re trying to do…literally anything. We suspect that this will be the last Christmas for our Great Dane, Little Debbie. We’re trying not to think about it. (And I’m deeply sorry if that last sentence put the earworm song “Last Christmas” by Wham! in your head. The only thing worse than that toxicity is Paul McCartney’s simply dreadful “Wonderful Christmas Time.”)

In January, we went to Cancun for a slightly late family Christmas present. There is nothing better than chilling on the beach, taking a nap whenever you want, and having access to all-you-can-eat ice cream. And I had to buy a bigger belt when we got home. We also renewed our wedding vows and exchanged new rings on the beach with our kids which was so cool.

As a family, we saw OneRepublic in concert in Salt Lake City. And for summer break, we went to Arizona to go to a Coldplay concert, and a Diamondbacks vs. Cubs baseball game. Mel bought us all matching Cubs tank tops. And we suddenly became the coolest, or, depending on who you ask, the nerdiest family in the ball park. Oh. Also, the bathroom at our AirBnB displayed a large photo on the wall of a nude Burt Reynolds, and his highly enviable moustache. So, there’s that.

We are so thankful for YOU, our treasured friends and family. We feel so fortunate to be surrounded by people we love. Here’s to an epic 2023 for you and your family! Sincerely
Cory, Mel, Jackson, Dani, and Kylee