Last week I read an excellent article by Marc Parent from the Newbie Chronicles in Runner’s World. Parent’s writing is so funny and so true. Click HERE to read the article.

He wrote about his seven year old son running his first mile, and the trophy they got for him. We thought that was a cool idea and told Jackson that we’d get him a trophy when he could run his first mile without stopping.

Jackson was instantly ready for the challenge. So we headed out in the brisk January air for his first effort. As he chugged along, I thought about the Little Engine That Could. He didn’t whine or complain, and seemed to have fun testing his limits. He finished with rosy red cheeks and a big smile. 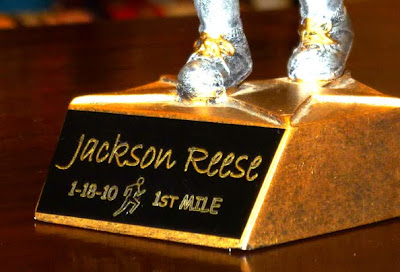 Gas to drive to the trophy store….…$3. Personalized metal trophy……..$15. The sense of accomplishment in your child…….priceless. 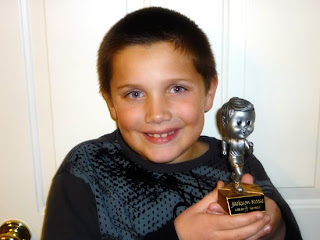