Monday, August 30th 2010: 4 miles @ 11:04 per mile pace. I have been putting more of a focus on hill training with the Top Of Utah Marathon & St. George Marathon coming up in the next month. I went out will Mel early in the morning and we ran on Widowmaker.

In fact, every run I did this week was on the enormous hill. Behold.......Widowmaker! 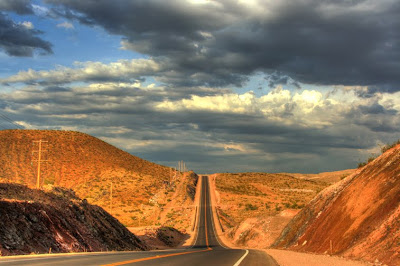 As a side note, this week was an internal battle for me. I very, very strongly considered registering for the St. George Ironman. (One friend said "That's the Devil talking to you.") If I had been near a computer I would have signed up.

But then I asked myself a key question: "WHY do I want to do the Ironman?" It ultimately boiled down to the huge sense of accomplishment I would feel. But then I realized that I already feel a huge sense of accomplishment every time I cross the finish line of a marathon. And marathon training is much less grueling. A marathon is like a casual stroll through the park compared to Ironman.

I drove the bike course and run course of Ironman this week. I'm not exaggerating in telling you that it is the most ridiculous thing I have ever seen. The hills are beyond description. I honestly don't know how someone could ride up hills that steep for almost all of the 112 mile course. And then the marathon course? You've got to be kidding me. Remember the picture I showed you of Widowmaker? You are either going up or down hills like that for the whole thing. The people who do that race are absolutely incredible.

The other deciding factor is that the race is 8 months away but I have almost no swim or bike training. So this race may be a possibility in the future when I have more experience. But for right now I'll settle for volunteering at the race.

Wednesday, September 1st 2010: 4 miles @ 8:55 per mile pace! On Widowmaker! My pace doesn't include the time I was hunched over mid-run trying to force air into my lungs and watching stars spin around my head. Ouch. By the time I got home I was ready to blow chunks.

Saturday, September 4th 2010: 11 miles @ 10:34 per mile pace. Due to other family activities, Mel and I had to wake up insanely early to run. We did the usual route toward the airport. Except for the last two miles, it was pitch black the whole time. Thank goodness for flashlights. 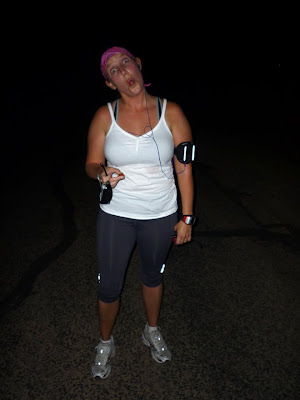 Saturday also started a new chapter in my life! For a long time I have been antsy to get into biking to cross-train for running. I finally got a good set of wheels on Saturday: A Bianchi Via Nirone 7!!!!! 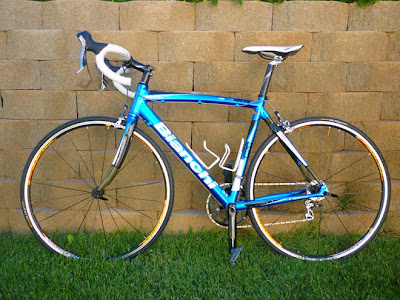 Let me tell you something: I LOVE this bike. It has the clip pedals that snap into bike shoes. So it is only a matter of time before I have my first fall on the bike when I can't get out of the pedals in time. I'll be sure to report the humiliating story to you as soon as that happens.