We drove down to Mesquite, Nevada the afternoon before the race and thought it would be helpful to drive the last section of the course just to know what to expect. There were some uphills toward the end of the race which nearly made me whimper like a school girl.

We snapped a few photos along the road while our friend Darin buried some Gatorade at the halfway point. It was deceptively beautiful outside. 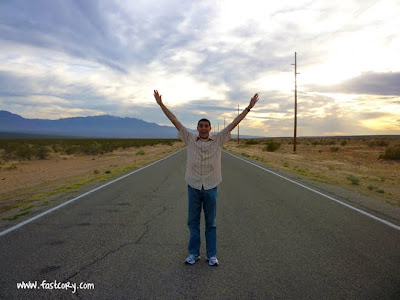 Mel was particularly fond of this sign near the beginning of the half marathon which she ran. 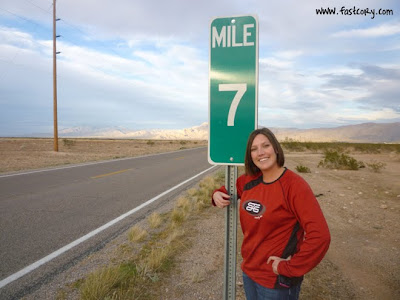 One cool thing about the Mesquite Marathon is that you run through 3 States! You start in Utah, run most miles through Arizona, then finish in Nevada. Packet pick-up at the Casa Blanca Casino the night before the race was simple and easy. Those cheerful, cheesy smiles are because the weather was still deceptively beautiful outside. 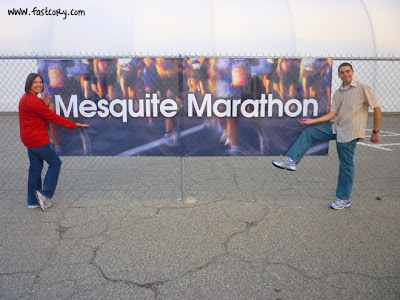 Our shuttle to the starting like Saturday morning was a nice bus with the most comfortable chairs my rear end has ever had the pleasure of sitting in. Part of me wanted to just stay on the bus, even if it meant a prison-style brawl with the bus driver.

We saw an incredible sunrise as we waited for the race to start. There was only a gentle breeze, but storm clouds were on the horizon. 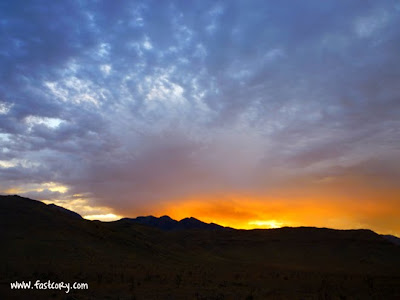 I maintained my tradition of wearing horribly mis-matched thrift store clothing to the race. I'm not kidding you - my son asked if I was wearing a Snuggie. 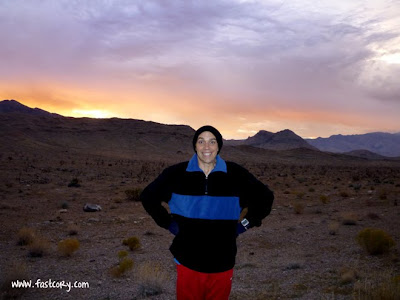 Hanging out with my friends Glenn, Jason, and Darin helped pass the time and alleviate pre-race jitters. 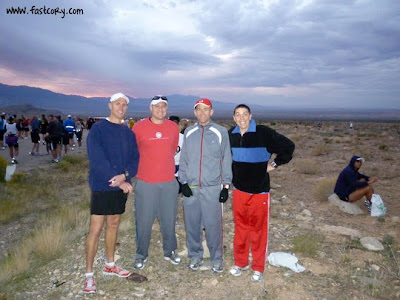 And then the race started. The Mesquite Marathon does their mile markers differently than other races. Instead of saying what mile you are at, signs tell you how many more miles to go. This is a great idea toward the end of the race, but when you see something like this, it can trigger waves of uncontrollable crying: 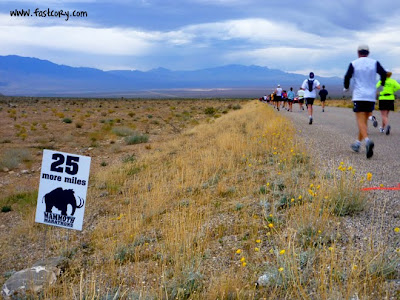 I started out feeling good, although within a few miles it started getting pretty breezy. The vast expanses of desert were beautiful in a weird sort of way. I brought the trusty camera and took around 60 pictures during the race. 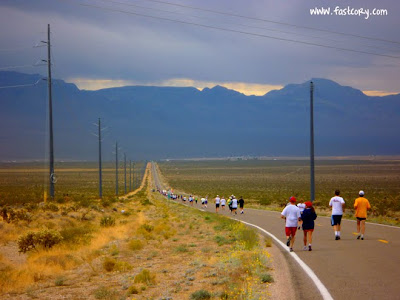 Around mile 5 or 6 I saw some yellow flowers that deserved a stop for picture-taking. It was around this time when things started to get ugly. You can see the dark clouds overhead. The wind started to get insane. And suddenly I wasn't having a ton of fun anymore. 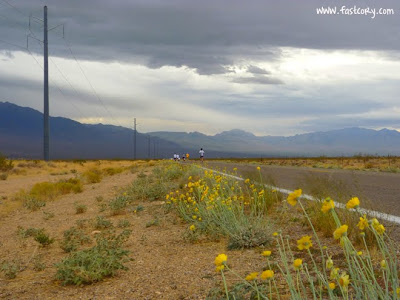 By mile 10 the winds were at full force. And as luck would have it, we were running RIGHT into the wind. One weather report said the wind was consistently at least 35mph, but gusts were up to 50 MILES PER HOUR! We certainly felt those gusts. Water was streaming out my eyes, and if I could have scraped all the dirt out of my eyes I could have filled a sandbox. Or at least it felt like it. I tried to figure out a way to show just how windy it was. And then I saw some flags in the distance. 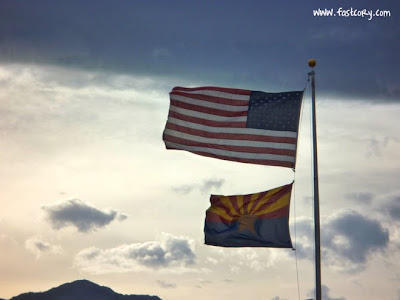 I also took a short video clip where you can hear the wind howling:


Despite the wind, I was still feeling okay at mile 16 and had my second fastest mile of the race (9:03). This little downhill into a canyon was the last section before meeting some of the ugliest hills I have seen in a race. 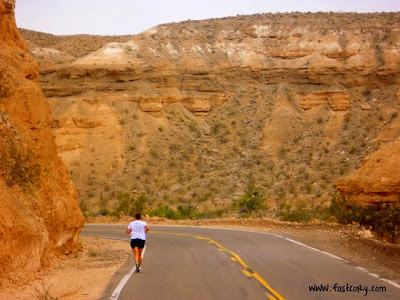 The Mesquite Marathon is a steady downhill course. Riiiiiiight. And I have a pet unicorn named Debra in the backyard. I actually felt good going up the first hill. I felt okay going up the second hill. The third hill was tolerable. But after many miles of hills I wanted to yell at the pavement and say "STOP IT! Enough already!" I heard so many swear words from other runners that it would make a sailor blush. For all I know, they buried the bodies of countless marathon runners who met their Maker on the side of those hills. 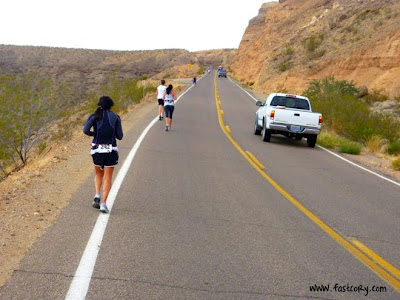 Around mile 23 I realized that I was miraculously within the grasp of getting a marathon PR (4:25) if I just kept a moderate pace. (Spoiler alert: I didn't.) The hills and wind had beat me into submission and I just didn't have the juice to keep me going at that "moderate pace".

Finally I reached the last mile. At this point, you can actually SEE the finish line. Even though it was only a mile away, it might as well have been in Detroit. I was spent. The volunteer saw me trying to take a picture of the "1 More Mile" sign but it was blowing so hard that the sign was laying flat against the ground. She came over and held it up for me: 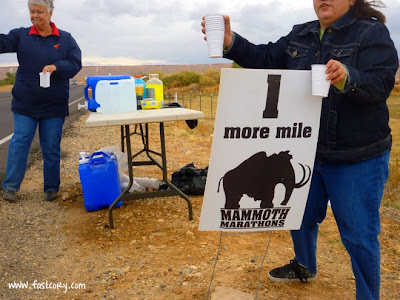 I finished the race in 4 hours and 32 minutes. As the guy on Princess Bride would say, it is "Inconceivable!!" that I was only seven minutes off a PR considering the course and the wind being insane in the membrane. I felt proud of myself for making it through something so hard. I felt so deeply grateful for the body my Heavenly Father has given me. After six marathons, I still find it Inconceivable(!) that my legs can carry me 26.2 miles.

At the finish line I saw a race photographer and tried to get a Jumping Jack picture. I managed to jump. But when I came down my legs were a little wobbly and I almost crumbled. A few people said "Whoa! Don't hurt yourself!" In retrospect, that would be pretty bad to say my running injury came from trying to jump at the finish line.

The race volunteers were excellent. Post-race food was excellent. (I inhaled a few bagels and a scrumptious cheese Danish.) My only injury was a blister on top of a blister on my foot. (I'll spare you the gory details, but trust me when I say this is possible.) After running this race, the next marathon will be a breeze (no pun intended).

"I've learned that finishing a marathon isn't just an athletic achievement. It's a state of mind; a state of mind that says anything is possible."
~ John Hanc 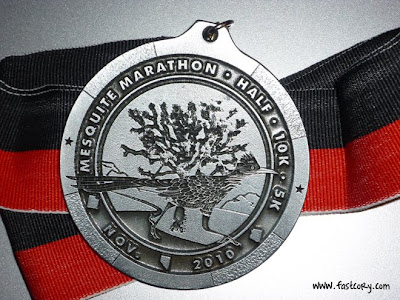