Merry Christmas from the Reese family! I find it difficult to summarize our awesome year into a few pages. I could be brief and say that we ate lots of snow cones from SnoKaps, and that I recently discovered the heavenly attributes of carne asada French fries from our local Mexican restaurant. But alas, much more has happened.

The kids all have excellent teachers and love school. Our children have even managed to enjoy chicken drumsticks when they have hot lunch, whereas for the average adult, just the sight of these drumsticks would cause dry heaves. They all enjoyed swimming lessons during the summer and have gone positively NUTS with the piano. The girls had fun taking gymnastics lessons this year and Jackson stays busy with scouts.

One highlight of the year was a trip to California to visit Sea World and Lego Land. The worst part of the trip was the flock of birds that lived outside of the windows. They had no concept of “bedtime” and enjoyed chirping at ear-piercing decibels all night long. Mel and I also went to Hawaii in March with two other couples and had a blast. I ate so much pineapple that my blood started to turn yellow.

Mel and I continue to work in the primary at church. Spending time with the kids is great. But I do have one beef with the primary room: the temperature always hovers around 638 degrees. I swear you could put some cake batter in there and have a beautifully cooked cake 30 minutes later.

Mel works a night a week at the hospital and also helps out a little bit at an assisted living facility. She is still very beautiful. She ran her first marathon this year – the Park City Marathon. Then ran a second – the St. George Marathon! At the expo before the race, we sat next to a guy who was 80 years old and running the marathon. I asked him what time he was shooting for and he said around 6 hours and 15 minutes. Mel said “Cool, give me props!” and she held out her fist for props. He just sat there and looked at her. I nudged her to put her hand down NOW! An 80 year old IS NOT going to know what it means to “give you props”.

And then, right before the St. George Marathon started, Mel stepped in a pile of human poop. It sloshed out the holes of her shoe. I believe I earned some Husband Bonus Points for running next to her for the next 26 miles while I smelled her foot.

I continue to my career as a social worker which keeps me busy. I managed to run 5 half marathons and 5 full marathons this year and am looking forward to a race I organized coming up next week: the Hostess Half Marathon. Runners must eat a Hostess product every two miles of the race. Registration filled up quickly and I’m certain there will be some barfing along the way. I signed up to run my first ultra-marathon (50 miles) coming up in March.

Here are a few other highlights from the journal:

January 4, 2010: So a few minutes after I tucked the girls into bed, Danica came down sobbing. She was crying hysterically. You’d have thought someone died. I asked her what was wrong and she said that her tooth got lost in the carpet and she couldn’t find it. I asked how that happened. She explained that her and Kylee thought it would be fun to play catch with her tooth. Two throws later, the tooth was lost in the carpet. With our carpet, finding a tooth is like looking for a needle in a haystack. We looked and looked. She continued to sob the whole time. I heard her whimper “Are you serious?” as she searched the carpet in dismay. We never did find the tooth. Thankfully the Tooth Fairy accepted a note for this tooth also. At least she didn’t eat it, like the first tooth she lost.

January 26, 2010: The Alzheimer’s conference I attended yesterday was at the Senior Citizen Center. Unfortunately lunch was provided by the Senior Center. I was doing my best to enjoy the broccoli cheddar soup when I came across a stringy black hair. Suddenly I didn’t want anymore soup. So I started eating the turkey wrap. With the first bite, I bit into a long brown hair woven between the slices of turkey. Note to self: never eat lunch again at the Senior Center.

April 5, 2010: The hike back was a little more challenging because it was so crazy windy. Kylee had a little stretch where she struggled and said “Dad, both of my legs are really tired.” She was able to keep trucking though. Kylee and I walked together during the hike and pulled up the rear. We had fun talking. She said that she wanted to have lots of animals when she gets bigger. Then she clarified “But I don’t want to be a cowgirl.”

April 26, 2010: We decided to take the kids to the Earth Day celebration in Springdale. On our way up, the kids asked if we could stop and see the ostriches. We agreed to buy a little bag of food for them to feed the ostriches and they were thrilled. Well, somehow Danica managed to grab the fence for a second. And a moment later she was running toward the car crying and screaming. I followed her to the car and she was bawling because she got bit. The guy who owns the ostriches happened to be out there and saw what happened so he brought the kids each a big ostrich feather. That got the tears to stop. Later she said that it scared her more than it hurt. I learned that it’s hard to show sympathy when you are laughing.

May 21, 2010: Apparently at school Dani’s class was supposed to be walking around the track for some reason. According to Dani, her friend Kelsey called over to her to come and look at some lady bugs. So Dani went. And then they got in trouble from Mrs. McCombs for not walking around the track. She put Dani’s name on the chalk board to lose recess the next day.
Danica came home from school distraught. I don’t think she gets into trouble too often so she was worried. She came home and wrote Mrs. McCombs a letter. It said something like “Dear Mrs. McCombs, I’m sorry I was looking at lady bugs. Do you forgive me? Yes or no?” She put it in an envelope and included a pack of Smarties. I asked her the next day what Mrs. McCombs said. She said that Mrs. McCombs forgave her and let her go to recess.

June 1, 2010: On our drive home from San Diego…. One funny thing about the drive home happened when we stopped for lunch at Arby’s. Kylee looked out the window and said “Look at that mof!” We said “What?” She said “Look at that mof!” We asked her again and she said “Mof!” a few more times. We thought it was really cute. Danica was polite in enunciating “mothhhh” instead of “mof”.

August 17, 2010: Jackson ran the Washington County Fair Mile Race. I was standing at the finish line talking to Shelly Thomas and we looked down the road and saw some runners coming. It was too far away so we couldn’t see any details, but Shelly said “It looks like the person in first place is wearing a black shirt. Maybe it’s Jackson!” I vividly remember the image of looking down the road seeing that black shirt and feeling unsure but hopeful. I remember the image so clearly because I thought to myself “That guy is going fast!” As the runners got closer I saw that it was Jackson – and he was in first place! It was really exciting. He ended up winning the mile race with a time of 8 minutes and 55 seconds! That is incredible. That is really fast! He won a ceramic plate and a $20 gift certificate from Classic Sports. I felt very proud of him for all his hard work.

September 21, 2010: I decided to take the kids to SnoKaps Wednesday night which they were excited for. Jackson said “I really hope there aren’t other people there because I want to order Care Bear flavor (cotton candy & wedding cake) but I don’t want other people to hear me order Care Bear.” When we got there, he was relieved that there weren’t other people around. He placed his order: “Can I get a small cotton candy mixed with wedding cake?” A few minutes later the guy opened the window with his snow cone in hand and said “Here’s your Care Bear”. Jackson was mortified. And we all howled with laughter. For the rest of the night, any time the girls saw somebody they said “Jackson likes Care Bears!” We all got a good laugh.

October 11, 2010: At some point during the week Kylee lost her first tooth. It was one of the small ones on the bottom. It was pretty loose so Mel suggested that she tie some floss onto the tooth to pull it out. Plans didn’t work out as well as expected. She kept tugging on it but it wouldn’t come out and Kylee started crying. Unfortunately the floss was tied on really tight and there was no way to get it off, so she either needed to pull it out that night, or go to school the next day with a big piece of floss coming out of her mouth. I took some turns wiggling it, and Kylee took some turns wiggling it, and FINALLY it came out. Thank goodness.

November 12, 2010: Mel made quesadillas for dinner and Kylee must have been pretty tired because she threw a huge fit when the rice was put on the side of the plate instead of inside the quesadilla. She was crying for a while and finally I told her she needed to go to timeout. Then she yelled “You guys aren’t the boss of me! Jesus is!” Mel and I both grinned at each other and bit our lips so we wouldn’t laugh.

November 18, 2010: Mel and the kids raked leaves at Marie’s house. I guess Jackson didn’t realize that there were still tons of leaves on the trees and he said “Mom, this seems a lot easier than last year. Does that mean I’m a man?”

Our family is so blessed. I couldn’t have asked for a better year. (Unless you could erase that little food poisoning incident I experienced in May.) Happy holidays from our family to yours. Wishing you a happy New Year with no hairs in your broccoli cheddar soup! Love, the Reese Gang 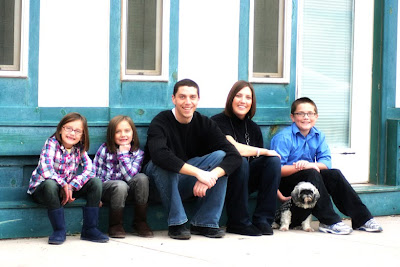