Thankfully the weather was much better than when we ran this race last year. A big crowd of crazies gathered at the Dixie Center Saturday morning for the St. George Half Marathon. We met up with a few of our crazy friends before the race: 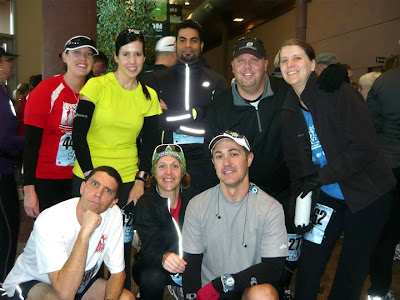 Later as we headed to the starting line I tried to take a serious picture of myself with the wife and then a bunch of crazy yahoos photo-bombed our picture. They are fortunate I didn't provide a complementary round-house kick to the jugular. 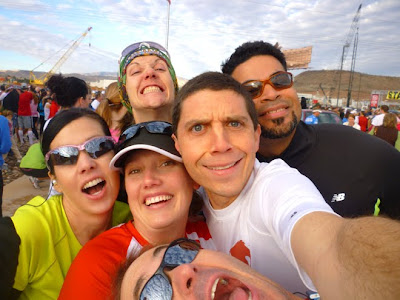 I think being part of a race is always so interesting and fascinating. It always gets me how different people are, and you can't predict athletic abillity by how people look. Sometimes I pass people who, judging by their looks, should smoke me in a race. And then sometimes I'm passed by people who look like they just checked themselves out for a morning pass away from the nursing home. I LOVE the unpredictibility. One guy (yes, shockingly this picture is a guy) was running so fast that his legs were on fire....literally: 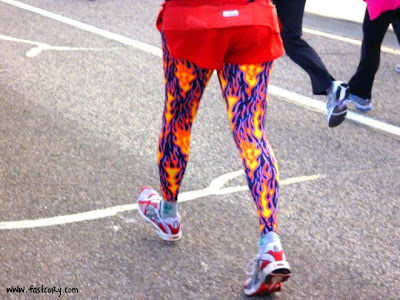 As far as elevation, this course wasn't too bad. There were a few rollers but nothing to really get panicked about. Due to some course changes, we passed the same areas a few times and there were lots of cheering spectators. The first part of the race was through neighborhoods, but much of the last section was on paved trails with cool views: 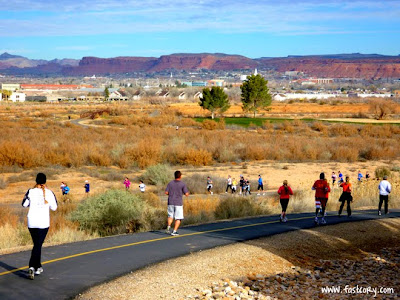 I witnessed the funniest thing I have ever seen in a race. Behind me I heard some motors whirring and then suddenly we were passed by......wait for it......wait for it.....Segways! Yep. Segways! These people were lucky to escape with their lives. Obviously they didn't understand that runners can get cranky during a race. They are tired and hurting. They are fighting voices in their heads telling them to give up. They would trade their first-born child for a Segway to ride to the finish line. And then to see Segways cruise past us....wow....they are lucky there wasn't a prison-style death match for those Segways: 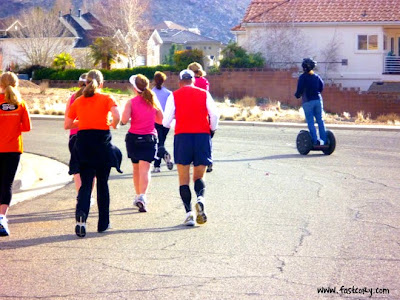 I ran the race with Mel and tried to set a steady pace for her to beat her half marathon PR (personal record) of 2 hours, 23 minutes, and 31 seconds. When we reached the final stretch I knew it was possible. I tried to encourage her to keep going. 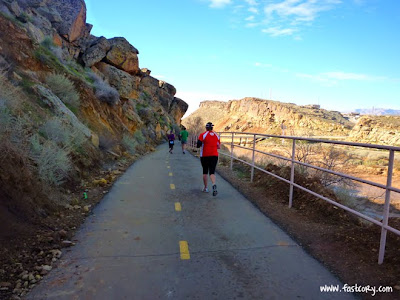 There was a big crowd at the end and she made a valiant push toward the finish line and finished in.....wait for it.....wait for it.....2 hours, 23 minutes, and 40 SECONDS! She missed her PR by 9 (NINE!) seconds. I don't think she cared nearly as much as I did, but I think she'll beat it at the Dogtown Half Marathon next month.

There was a selection of good food (peanuts, Rice Krispy treats, granola bars, fruit snacks) waiting for us in the finishers area. And then I saw this image of bold patriotism: 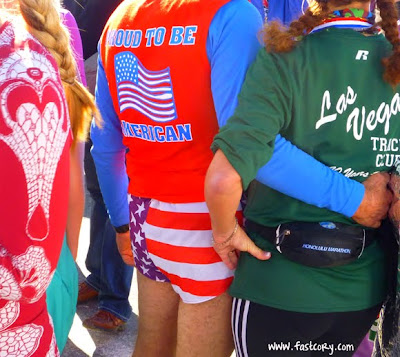 It was a fun race and I enjoy running with Mel. Maybe we'll ride Segways at the next half marathon. 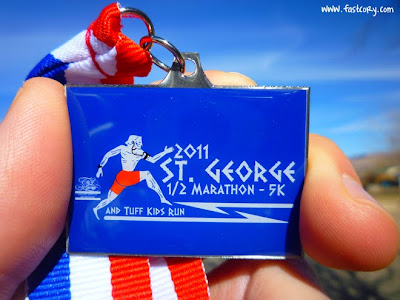 Nobody cares if you're not a good dancer. Just get up and dance. The same holds true for racing. Whether first or last, we all cross that same finish line. Just get out there and run.
~ Dean Karnazes, Ultrarunner and best-selling author
Posted by Cory Reese at 3:25 PM