27 Miles - My Longest Run Ever

Monday, January 31st 2011: 9 miles @ 12:56 minutes per mile pace. I woke up very, very early to hit the road before work. My hip/butt muscle was really bugging me and I couldn't run very far before it would act up and I'd have to walk. To be honest, I was very worried.

Wednesday, February 2nd 2011: 11 miles @ 11:29 minutes per mile pace. It was 17 degrees outside and blowing like the dickens. It blew so hard for days that many houses in our neighborhood were covered in tumbleweeds. I've never seen anything like it before: 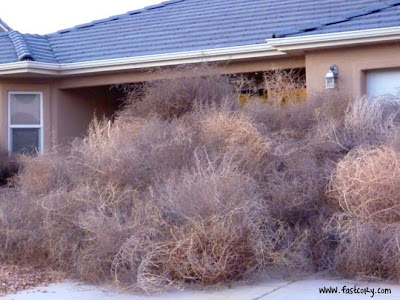 In fact, just to prove how bad the weather was....I did this run ON THE TREADMILL. (Gasp!) I have been so anti-treadmill since I started running two years ago so I feel like I'm betraying all morals and values when I tell you this, but it actually wasn't too bad. I know. That sounds crazy. Normally I would rather shove a rusty fork into my retina than run on a treadmill. But maybe I just didn't give it a chance.

I don't see myself spending a ton of time on Satan's Sidewalk, but when it is 17 degrees with wind similar to standing behind a jet engine, I may take the 'mill.

Thursday, February 3rd 2011: 4 miles @ 11:20 minutes per mile on (please don't judge me) the treadmill. I've read that an important part of ultramarathon training is learning to eat while you run. Well...it just so happens that we received the best Christmas present ever: an all-edges brownie pan! I thought I'd eat a brownie before my run. But it was so good that I ate another. And then another. And then I didn't feel very good for the first few miles on the treadmill. 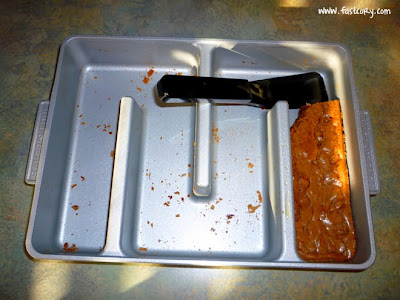 Friday, February 4th 2011: Rest. Some crazy ultra-runners carbo-load on beer and nachos so I figured part of my carbo-loading for the Saturday long run could include some Mountain Dew and a large gas station sugar cookie. Delish.

This is a really pretty place to run. There is a section on the Sand Hill road that is covered with Moqui Marbles from an extinct volcano. It seemed like the perfect spot to rest for a few minutes and take a picture: 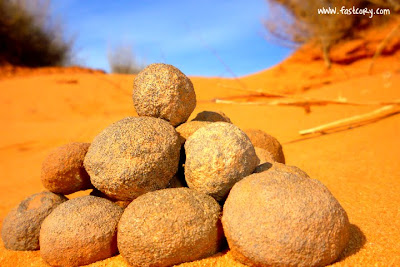 When I was at mile 24 an older couple in a Jeep pulled up next to me. He rolled down his window and looked at me with a puzzled face and said "Um, do you need a ride?" I smiled and said "No, I'm okay. But thanks!" I wish I had taken a picture of the look on his face. He sat there looking at me dumbfounded for about eight seconds. It was one of those Awkward Silence moments and I was anxious to see what would happen next. He said "Well, okay." Then he stared at me for a few more seconds and then drove away. Priceless. 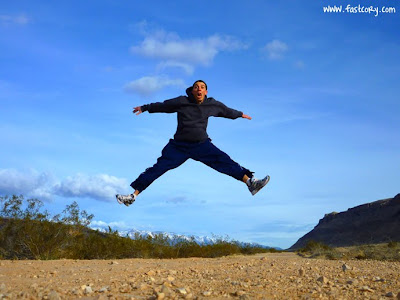 Top results are reached only through pain. But eventually you like this pain. You?ll find the more difficulties you have on the way, the more you will enjoy your success.
~ Juha Vaatainen, Gold Medalist at the 1971 European Championships
Posted by Cory Reese at 8:55 AM