Mission accomplished. I had proclaimed that one of my running goals was to get a jumping jack picture during a race. I was relieved when a friend sent this image from the recent St. George Half Marathon: 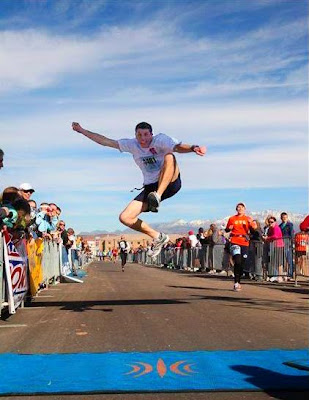 It's hard to be upset at a photographer for not getting a picture of you doing a jumping jack when ...... um ..... you don't do a jumping jack. I guess in the heat of the moment I didn't realize that instead of doing a jumping jack, I did a Look-At-Me-Riding-Invisible-Rollerblades jump. I didn't really have much time to plan everything out. I quickly scanned the fellow runners around me to make sure that, at least for a split second, the photographer would have an unobstructed view. I also didn't want to unintentionally give another runner a swift kick to the crotch. This meant slowing down so that Mel could finish ahead of me, but not slow down so much that the runners behind me would catch up.

The truth of the matter is that I'm very pleased with the Invisible-Rollerblades jump. In the words of the wise philosopher Napoleon Dynamite, I "caught like three feet of air." (Three feet of air = much less than three feet.)

(Note: no runners were kicked in the crotch during the taking of this image.)
Posted by Cory Reese at 4:16 PM