Monday, March 7th 2011: 9 miles @ 10:46 minutes per mile pace. I walked out the door at 5:00am and into a torrential downpour. Honestly - who, in their right mind, participates in a hobby which involves waking up at 5:00am to run for a few hours while wearing a large black garbage bag? Who? Who! I'll answer that for you - nobody. Nobody in their right mind does that. Which is why I was out at 5:00am in pouring rain wearing a garbage bag.

I had stuff going the next day so I decided to do the next day's run on Monday night: 4 miles @ 8:59 minutes per mile pace. I haven't done a tempo run on purpose in months (or years?) and was curious how I'd feel running at goal marathon pace for a few miles.

I really want to run under a 4 hour marathon someday which is around 9:09 per mile. But this run wasn't very encouraging. I was pooped by the end and couldn't imagine running another 22 miles like that. I'm not going to give up trying, but part of me wonders if this goal is a little out of reach.

Wednesday, March 9th 2011: 13 miles @ 10:34 minutes per mile pace. I ran on the Arizona Strip dirt road which is equally challenging and beautiful. 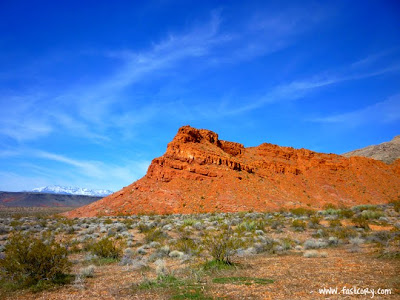 There is one hill which is a real beast. I loathe it. I saw a car driving up it which gives a better perspective of how big the hill is: 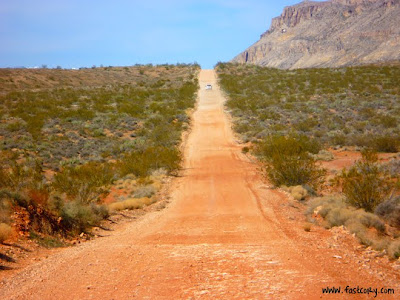 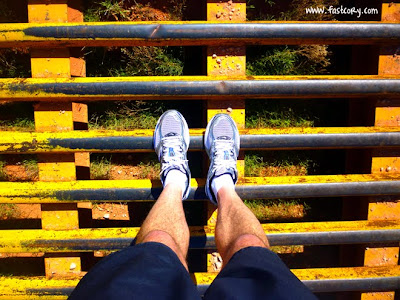 I put sunscreen on but still managed to get a little bit burned. That wasn't a surprise though. I can get a sunburn while standing inside. At night. 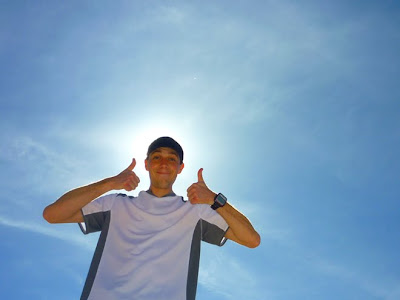 Thursday, March 10th 2011: 4 miles @ 10:53 minutes per mile pace. This was one of those I-Feel-Like-A-Slug days. My legs had no interest in moving. I had my taper planned for the upcoming ultra, but after today I think I'm going to taper my taper just to make sure I'm fully rested.

Saturday, March 12th 2011: 9 miles @ 12:08 minutes per mile pace. I ran the Hurricane Rim trail which is technically challenging so my pace was slower. I ran into a few problems in the last mile of the run. First - I got a pretty good roll of the ankle. A word popped out of my mouth that shouldn't have popped out of my mouth as my knees hit the dirt. I think I fell before it did major damage though.

About five minutes later I was cruising down the trail when apparently I tripped on a rock. I had this strange realization that I was flying through the air, mid-flight, like I was sliding for home plate. It was the weirdest feeling to be airborne and know that I would be kissing Mother Earth a split second later.

And then I kissed Mother Earth. My knees got in on the action too. I was so angry. I grabbed a water bottle and spiked it to the ground. Then I felt a little better. 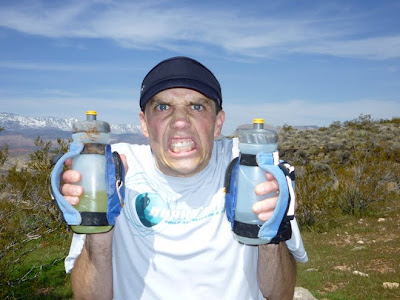 I was only a few minutes away from the car and decided I better walk back, considering my poor track record for the day. Next time I'm on a trail I plan to do better at staying vertical.

"I grew up believing that once you completed a marathon it was as if you had been sworn into a secret society. A society of runners who become sisters and brothers, bonded by blisters, chaffing, dehydration, cramping and intense pain! We will have endured the same rigorous path together."
~ Shalane Flanagan
Posted by Cory Reese at 8:52 PM