After Mel broke her elbows I was heartbroken about not being about to run my first 50 miler. But a big, fat, enormous light bulb went off after I backed out. I remembered that the Sand Hollow Marathon was on Saturday. This inaugural marathon starts one mile from my house. PERFECT!!!!!!

I told my friends Karrie and Cherie that I would be joining them for the marathon and they sent me the sweetest messages. They said that they would help support me and help take care of Mel if I wanted to run more after the marathon to get up to 50 miles. Their kindness made me cry.

It got me thinking that maybe I could turn this into my first impromptu ultramarathon. Instead of running during the day I decided I wouldn't go to sleep and I would run 24 miles through the night, finish right before the start of the marathon, then run the marathon. I even saw friends Bill and Michelle at 12:30am who volunteered at an aid station a few hours later!

To be honest, the 24 miles in the middle of the night were miserable. The only thing I had eaten that day was a McDonalds breakfast combo and a piece of lasagna. Combined with no sleep, it felt like I hit the wall before I even started. But I survived the first 24 miles: 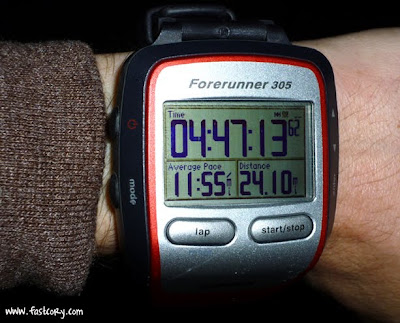 I had an hour before the marathon started so I changed clothes and hoped to eat a little. Unfortunately my stomach felt SO ultra-nauseous. I managed to gag down half a banana but knew that wasn't much fuel to get me through a marathon. I was almost positive I would be barfing by mile 2.

I counted 14 friends who also ran this marathon. It was fun to meet up with them before the race. Cherie, one of the instigators of my 50 miler showed off the big 50: 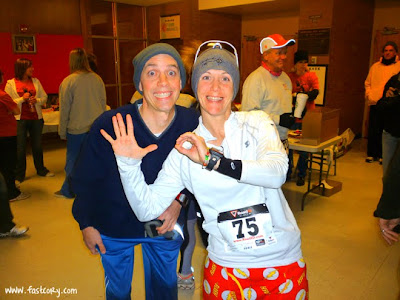 I hung out at the starting line with the other 68 marathon runners and the weather was overcast but felt perfect. 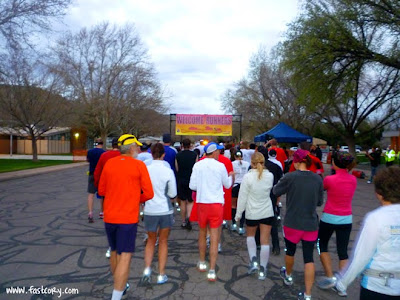 Then I saw Gladiator and Batman running and had to snap a picture! I ran a few miles with them and we laughed about race costume stories. I found out Batman likes green Gatorade. 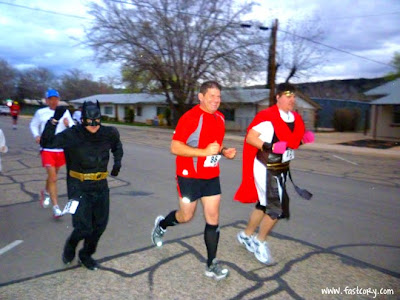 I really enjoyed running with Alex & Cherie (far left) and Shane & Karrie (3rd and 4th). For Alex and Cherie, this was their first marathon. Excited.....yep. 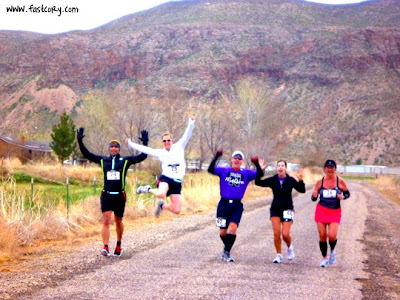 I was complemented by a race photographer at mile 8 who said I "caught some serious air" when I jumped for a picture. The clouds made for some cool pictures. I couldn't resist this scenery with Batman and Gladiator: 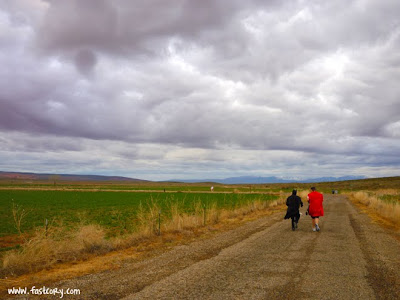 On the way down Nemesis Hill I had to slow down because the hill was so steep that it was grinding my knees. No detail of race preparation was overlooked. They even covered the cattle guards going down Nemesis: 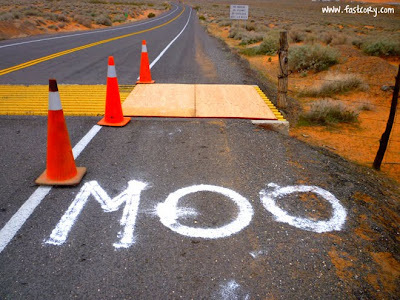 I award three thumbs up for the awesome sidewalk chalk picture we got to run past: 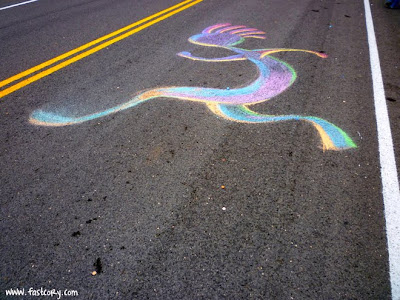 Race director Jason Smith designed a challenging and beautiful course. His race went off without a hitch, even more impressive since it was the inaugural year. The aid station volunteers were absolutely incredible. Despite the freezing rain they were so enthusiastic and cheerful. I was so thankful for their help and tried to personally tell each of them.

I loved the out-and-back course. I think it's fun to see the faster people coming from the other direction and cheering them on. You can't miss Nemesis on the elevation profile:

By mile 13 the winds had picked up and it was pouring rain. I was soaked to the core and freezing cold. Then an angel showed up in a pickup truck - carrying a garbage bag. I could have hugged her. Even though I was already soaked, the bag helped block the wind and keep me a little warmer. I felt so happy and thankful that my eyes got teary. (I found out later that it was the race director's wife. Thank you!!!!) 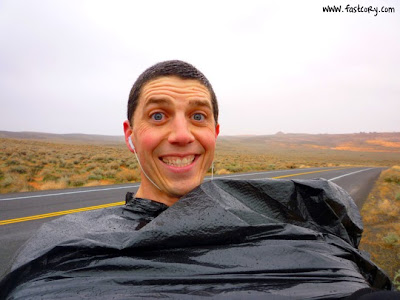 Finally it was time to go up Nemesis. Even though it was mile 18 on the course, I had already run 42 miles. And, unsurprisingly, I felt like I had run 42 miles.The whole no-sleep-for-a-few-days thing was catching up to me. 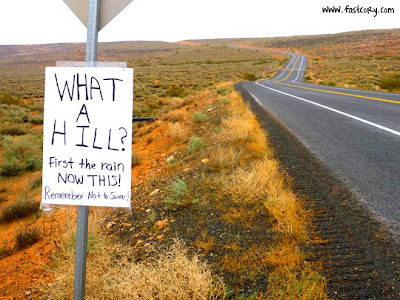 Toward the end the runners got pretty spread out from each other. I ran many, many miles where I didn't see anyone else in front of me and only occasionally saw another runner on the horizon behind me. I had a slow mile getting up Nemesis and there was a port-o-potty at the top. I hung out in there for a minute....not to go to the bathroom but to have a few moments out of the rain. 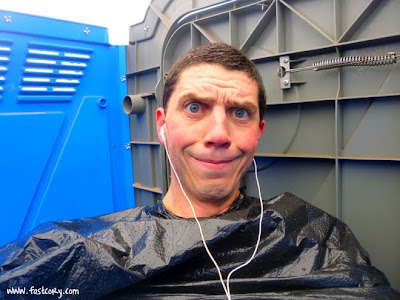 Those last six miles were challenging. I felt completely out of gas. But I also felt so happy that I was on the verge of completing my first 50 miler (Mel suggested I call it the "24+26 Ultramarathon"). Mel, my awesome mother-in-law Marie, and Jackson met me at mile 25 (or mile 49) and I was overjoyed to see them.

Jackson ran the last mile in the rain with me and we crossed the finish line together. I even managed to jump across the finish line of my first 50 miler. A medal was placed around my neck and it happens to be my favorite race medal ever. This puppy is big! Another three thumbs up for race organization and the fat bling to go around finisher's necks.

I finished the marathon in 5 hours & 24 minutes! We went inside the Hurricane Community Center to get some post-race food. My favorite was these little morsels of heaven: 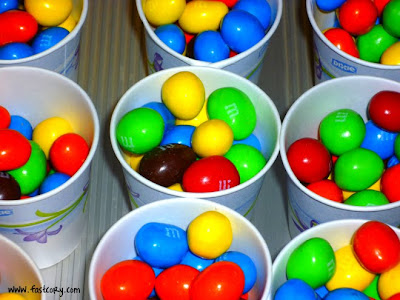 I was quivering from being so cold but was so happy for what I had accomplished and so thankful my family could be there. I realized that Mel may have saved my life by breaking her elbows. I may have died if I had run the 100 miler. I realized after I crossed the finish line that things worked out the way they needed to. I feel so, so blessed. 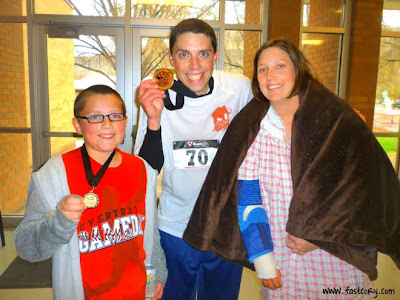 "I've learned that finishing a marathon isn't just an athletic achievement. It's a state of mind; a state of mind that says anything is possible."
~ John Hanc 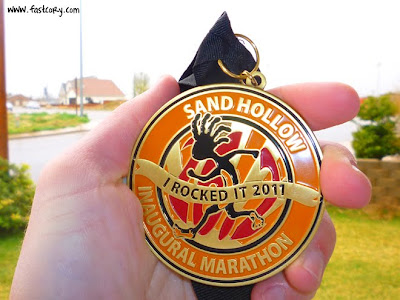