I Almost Went Chuck Norris On A Guy

I remembered a situation that happened a few years ago that was pretty funny (and by "pretty funny" I mean "very scary".) I'm deeply grateful I lived to tell about it.

One night Mel and I went on a casual bike ride. I was going down a hill on the side of the road minding my own bees wax when a car pulled up behind me and laid on the horn. I thought it must be one of my friends being obnoxious. But after 10 seconds of honking I turned around to see this punk kid who then sped past me.

I was slightly irritated (and by "slightly irritated" I mean "I am going to go Chuck Norris on this guy.") Then I saw him pull into the gas station a block ahead. I decided to pull in too and let him know that his dirt bag behavior wasn't very cool. Well it just so happens that as he was pulling into the gas station, he honked at someone else because their door was opened and he couldn't get by (FYI: he could get by.) Thankfully some other patrons saw him being a punk too.

So I pulled my sissy bike up behind his car and waited for him to get out. But when he did, a significant amount of my bravery evaporated. I realized maybe I bit off more than I could chew. It was a punk teenager with six earrings and an attitude. He looked grumpy and mean. I said "Why were you honking at me?" He said in a mega-sassy voice "Cause you were in the middle of the road!" (FYI: I wasn't in the middle of the road.)

So then I said "Oh yea? Why don't you say that to my face! I'm about to give you a five-knuckle introduction. I'll put a goose egg on your head big enough to have an umbilical cord!"

Disclaimer: I did say the previous sentence to him. In my head.

The other people who saw him honking chimed in, nearly matching the punk's sassy voice and said to him "The world doesn't revolve around you!" Then a bunch of 4-letter words started flying. Seriously. They were about to go Jerry Springer on each other. I figured that was my cue to leave.

I'm sure he was scared to death when he saw me. My enormous muscles intimidate most people. I'm guessing this will be the last time he messes with someone who looks this terrifying: 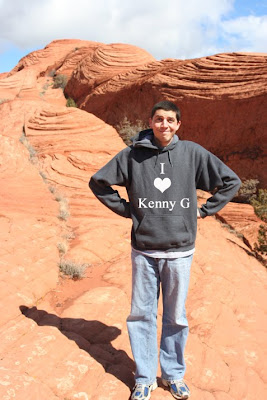