Spartan Races and Ultramarathons Are Dumb

Spartan races are the big thing in my neck of the woods right now. For those of you unfamiliar with a Spartan race, it is basically an obstacle course up to 12 miles long. Obstacles include difficult tasks like climbing a big wall, running through mud, and watching an entire episode of The Golden Girls.

I’ll be honest with you. I don’t understand the appeal of Spartan races. So you’re telling me you get to climb under barbed wire and throw spears for twelve miles? Um…..okay. Thanks, but no thanks. Add Spartan to the list of things I’ll never do (including a Ragnar relay, a Rock and Roll Marathon, and eating sushi).

Wait a second before you send your hate mail. I don’t mean to ruffle any Spartan feathers. After all, you guys are strong and could beat me up, give me a weggie, and steal my lunch money. What I’m getting at is that my sport is kind of pointless and dumb too.

I came to this realization at work a few days ago. One of my patients heard that I run 100 mile races. She is a sweet, older lady who reminds me of my grandma. She called me over with a look of concern that reminded me of how a parent would look if their child said they wanted to grow up to be a carnival worker. She wanted all the details. The conversation went like this:

Concerned Grandma: Someone said that you’ve run 100 miles. Is that true?

Concerned Grandma: And I heard you’ve done this a few times.

Me: I’ve finished four 100 milers and then started two more but I didn’t finish the whole race.

Concerned Grandma: How many days does it take you to run 100 miles?

Me: It’s not spread out over days. You start in the morning and keep running until you’re done the next day. Most of them have a limit of 30-35 hours.

Concerned Grandma: Does a car drive next to you to make sure you’re okay?

Me: No, the races are on remote trails out in the middle of nowhere. Sometimes you’re all alone in the wilderness for hours without seeing anyone else.

Then I stood there with my words hanging out in the air. Uh oh Cory. Do you realize how idiotic you just sounded? Wilderness? Alone? For HOURS?!?!? Hurry Cory. You’re losing her.

Me: Yes, lots of wildlife, but no bears. I’ve only seen bear tracks. (Stupid Cory! Why did you have to say that last part?!?)

Me: Yea, my knees feel really sore in the later parts of the race. 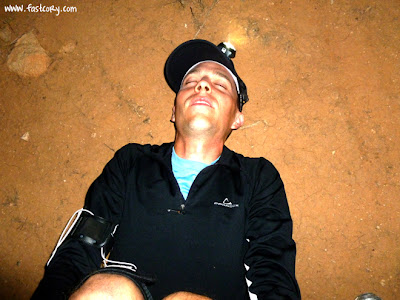 Concerned Grandma: And your feet?

Me: Well, those hurt pretty bad too.

Concerned Grandma: Do you sleep during the run?

Me: No. That’s one of the hardest things about a 100 miler for me. After only seeing by the light of your head lamp, your brain starts to go a little crazy by around 2:00am. I get really, really tired, but when I stumble I wake myself up from the sleep walking.

I finished that sentence and she just stared at me. It was at that moment when I realized my logical reasoning had jumped the track. The appearance of common sense was shattered beyond repair. I thought about trying to change the subject. “Hey, remember when Saturday Night Live was funny?” Instead I just smiled and said “I know, it sounds strange.” I told her to have a good day as I walked away feeling sheepish.

So to all you Spartan racers: your sport still sounds really dumb to me. It sounds lame to swing on ropes and dodge tasers. But I fully endorse you calling ultramarathons really dumb too.

Experiencing pain so intense that it has made a grown man (me) cry……alone in the dark in the middle of nowhere…….bear tracks…….it’s hard to explain but I really love this ultramarathon thing. I love it. I live for it. It is who I am. The finish line of my first 100 miler transformed me and I will never be the same.