This weekend at the Jackpot Ultra Running Festival 100 miler was the most amazing experience I've had since I started running. I could have never imagined what would come of this race.

The race is a 2.3 mile loop through Cornerstone Park, a wilderness reserve in Las Vegas. This was the inaugural race as well as my first time ever racing on a short loop course. I've run many races with my good friend Susette and encouraged her to sign up for this one as her first 100. I hoped she'd still be my friend after the race. 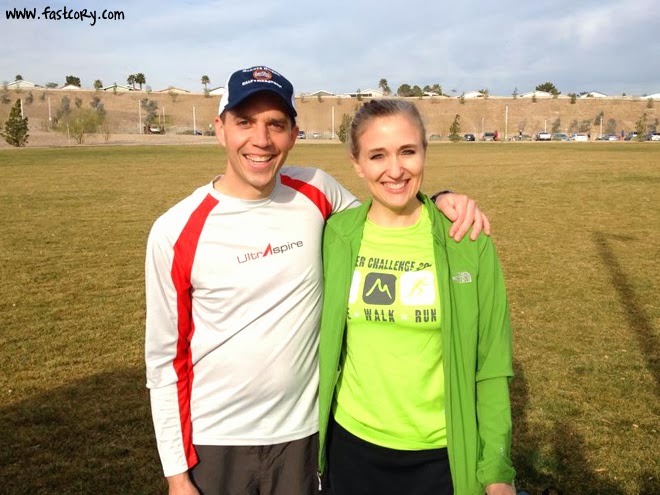 I mixed up some bottles of Tailwind the night before the race, put them in a cooler, and my plan was to only stop during the race long enough to fill up my water bottle. In and out. No dilly dallying. Keep moving forward. Livin' la vida loca. Ice ice baby. I believe I can fly. Beware the chair.

The race had some different options. You could register to run 6 hours, 12 hours, or 24 hours. There is no fixed distance with those, you just run as far as you want during that time. This is a GREAT way to break into ultramarathons. Or runners could register to go for 100 miles. All the different groups started at the same time which was fun. 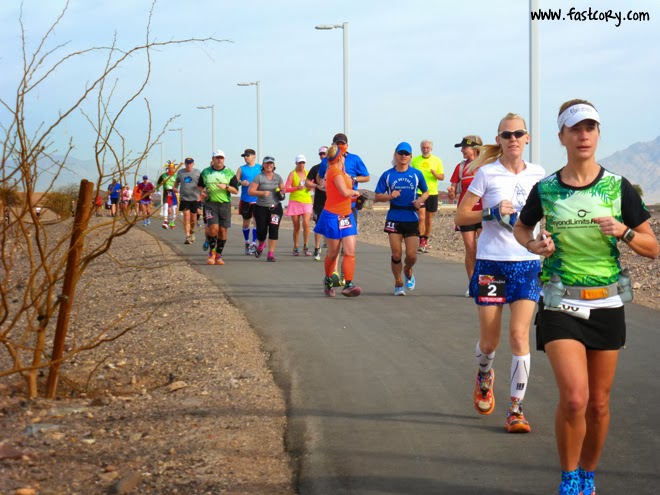 About half the course was paved asphalt. I do most training on trails so I was apprehensive about this but it actually ended up working out fine. 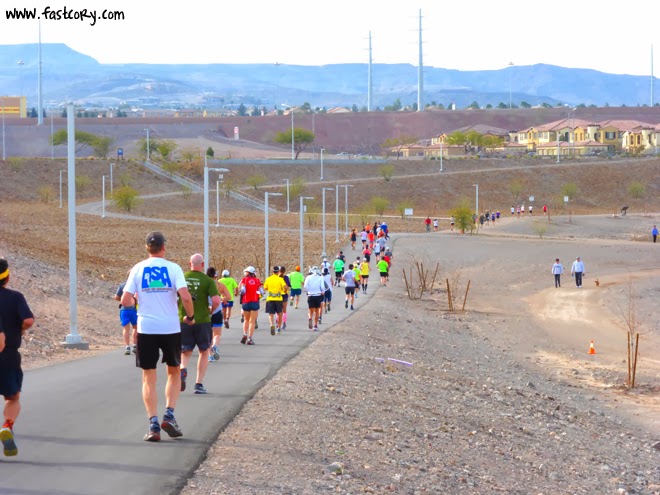 There was a short section of rocky, technical trail but the rest of the trail sections were beautifully runnable packed dirt and sand: 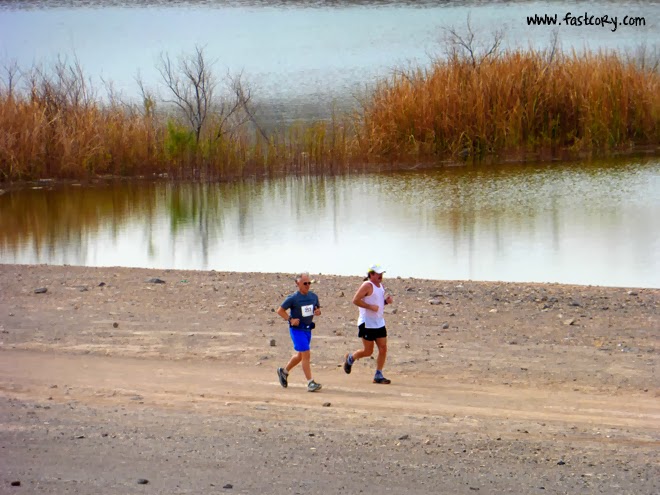 We circled a small lake full of ducks and geese that honked incessantly like broken bike horns. I caught my friend Kit's reflection in the lake as she ran by.

The headquarters where you finished then started each loop had a huge aid station and live bands throughout the day. There was one time when we came through a loop that these cheerleaders greeted us. 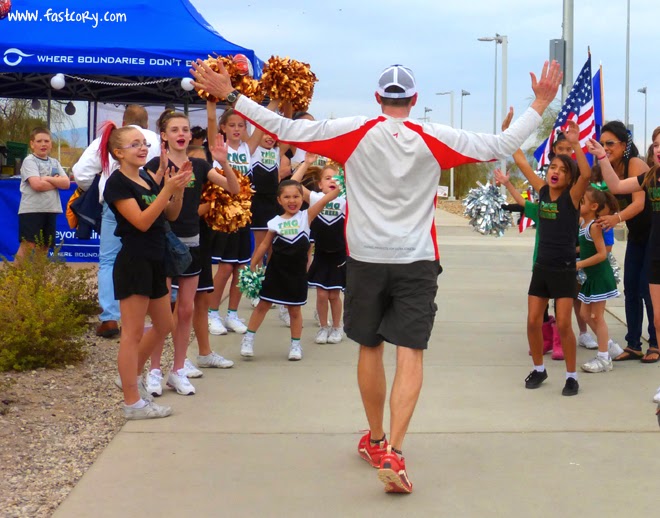 Temperatures were forecast to reach 80 degrees and I drove to Las Vegas knowing that without any heat acclimation it was possible that my skin might melt. Thankfully we had cloud cover almost the entire day which kept the temperature perfect. 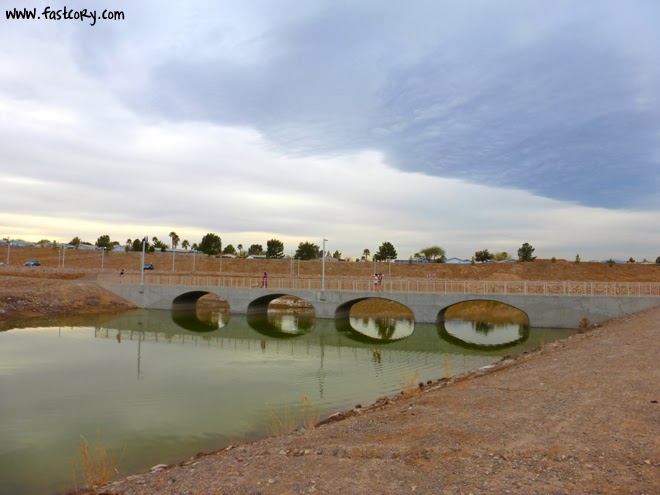 Throughout the race I ran quite a few miles with Colby Wentlandt. Listen. This kid is 13 years old. Nope. Not a typo. 13. And not his first 100 miler. During those many miles we talked a lot and I was seriously impressed with his wisdom and understanding of the sport. He is wise beyond his years and kept a steady, solid pace the whole race. (While managing to smile the whole time.) 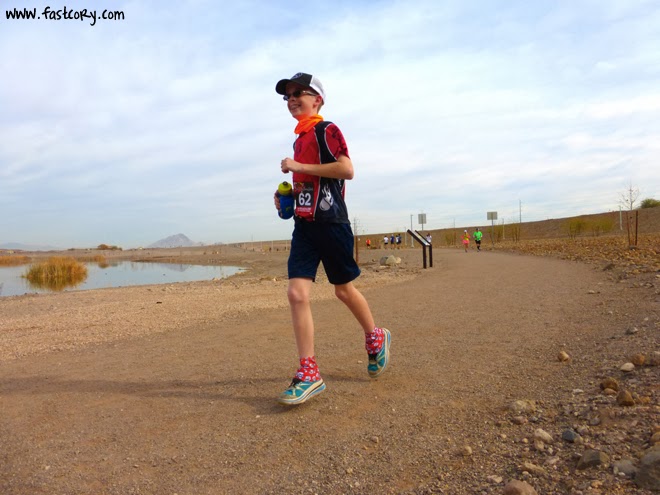 The thing I love most at ultramarathons is the fine group of people I get to share the trail with. Everyone is so amazingly supportive and encouraging. Especially on courses like this where you see each other often, everyone was saying "Good job" or giving a thumbs up or a "Way to go!" each time they passed. Everyone. The fastest people. The slowest people. Everyone helps everyone.

I was particularly inspired by one lady I saw throughout the race. I had to ask her name, and asked her forgiveness for asking how old she is. This, my friends, is Barbara. She is 79 years old. She told me she registered for the 12 hour race as a training run. She's doing a 24 hour race next month to train for her 100 miler in May. (She already ran a 100 miler at age 74.) I looked her up after the race. There is an awesome video about her HERE and an article on Trail Runner Magazine HERE. Talk about going beyond limits. 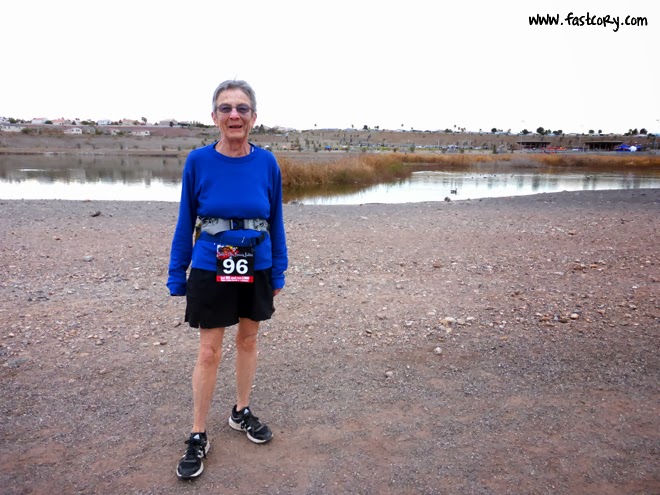 I remember seeing a horrible infomercial years ago for a rotisserie cooker. The audience kept chanting "Set it....and forget it!" I thought about that while I was running. I really focused on staying in the "Set it and forget it!" mindset during the race. I got into a steady pace where I was pushing but not overdoing it.......and I stayed there. Hour. After. Hour. In the zone. Just livin' la vida loca. (Thank goodness THAT song didn't get stuck in my head for 100 miles!) That got me to the 50 mile mark in 10 hours and 37 minutes. I was ecstatic, I've never run 50 that fast before.

I changed my socks, coated them with Body Glide, and took a dose of Vitamin T (Tylenol) as the sun set on day one. 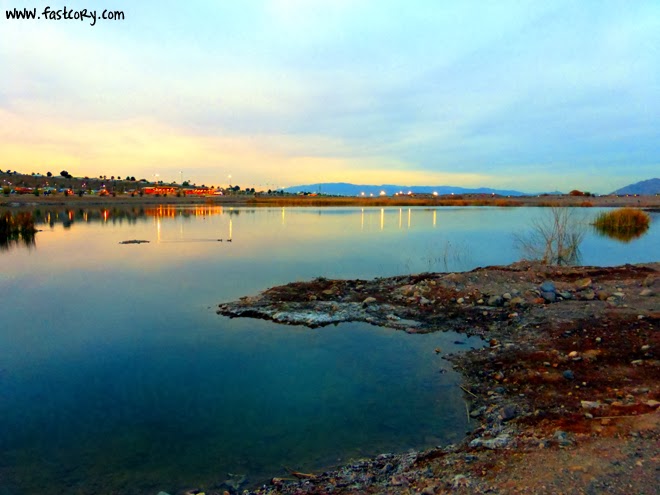 I used primarily liquid calories for the race and thankfully my stomach stayed great the whole time. The aid station was amazing so when I passed by I would occasionally grab a few pretzels, or a bite sized piece of pumpkin pie, or for the first time during a race......cheesecake. Cheesecake. I heard the heavens open and a choir of angles rejoice when I took a bite. 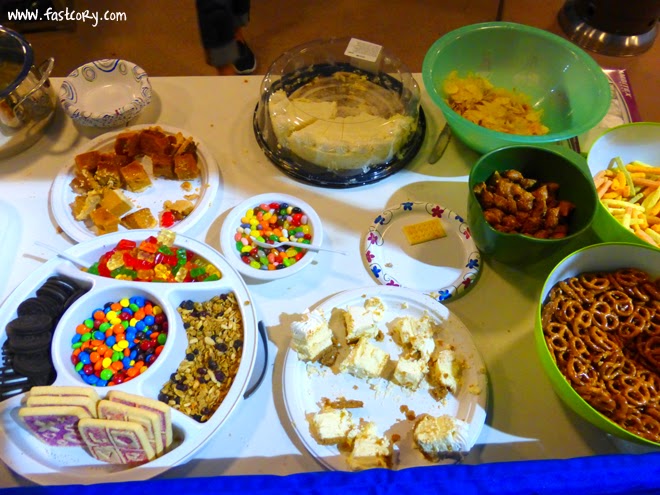 When I finished 50 miles, my friend Marcellus showed up to pace me for a while. I was starting to bonk a little before he got there so I hoped I could get back on track. Marcellus is a crazy fast Kenyan runner who has finished a marathon in 2:48. (Nope, not a typo.) This was his first encounter with an ultra. On my first loop with Marcellus I showed him the easier parts of the course where I pushed, and the harder parts of the course where I held back. I wanted him to just lead me along. Set it and forget it. This was my only view for the next 4+ hours. 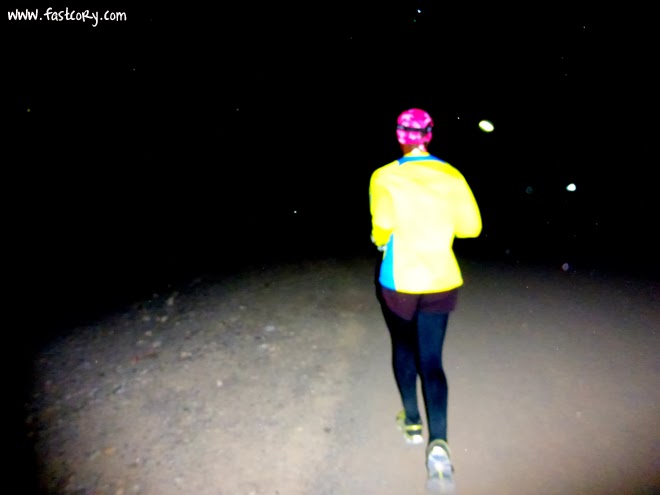 In those 4+ hours we didn't talk hardly at all. Which is EXACTLY what I look for in a pacer. Trying to hold a conversation takes too much mental energy at that point in a race when I'm just trying to keep one foot in front of the other. I am so, so thankful for his help keeping me going. 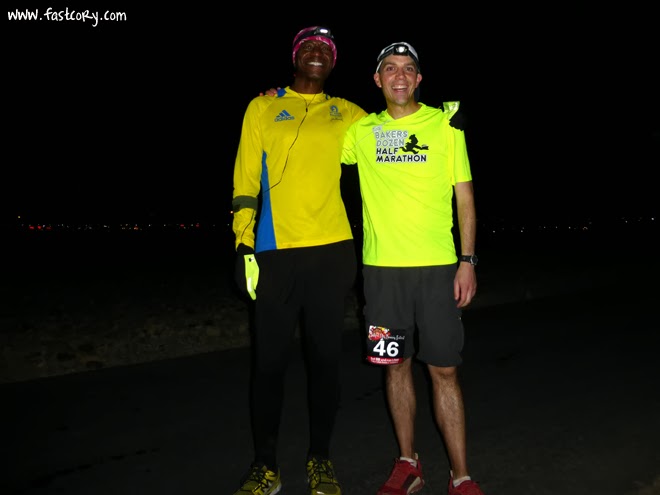 After about 20 miles he left and my plan was to just hang on and make sure the wheels didn't come off the bus. I very desperately wanted to run a sub-24 hour race. Whenever I started to feel discouraged or tired or frustrated or exhausted, one number popped into my head: 24. I saw this sign during every loop which helped me keep focused on my goal:

I wasn't wearing a Garmin and didn't really know how my pace was going but as the sun started to rise on the second day I realized that if I kept setting it and forgetting it I would be able to achieve the inconceivable sub-24. 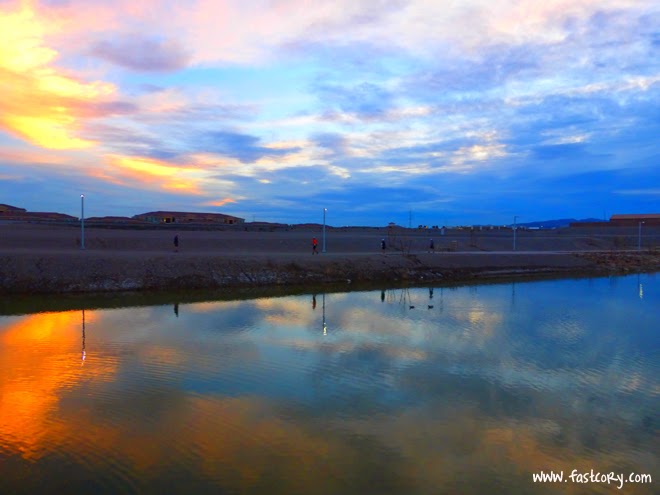 I saw some inspiring stuff as the hours went on. I saw people persevering despite clearly struggling. I saw Ed "The Jester" Ettinghausen propelling himself down the trail in spite of working through a past injury. You have no idea how much determination and grit is behind this picture. It's no wonder that Ed inspires so many runners.

I saw the absolute best of humanity. For example, my friend Karen signed up for the 12 hour race. She decided to run 33 miles then be done. She left, did a little shopping, ate, then came back to cheer for runners. She saw a 100 mile runner who was really struggling and decided she'd go back out on the course to help him finish the race. And ended up doing another 32 miles. Things like this give me chills.

I got to mile 90 and could taste that sub-24. I think it tasted even better than cheesecake in the middle of the night. I started pushing even harder. I was so excited knowing that unless the wheels really fell off, THIS WAS GOING TO HAPPEN. 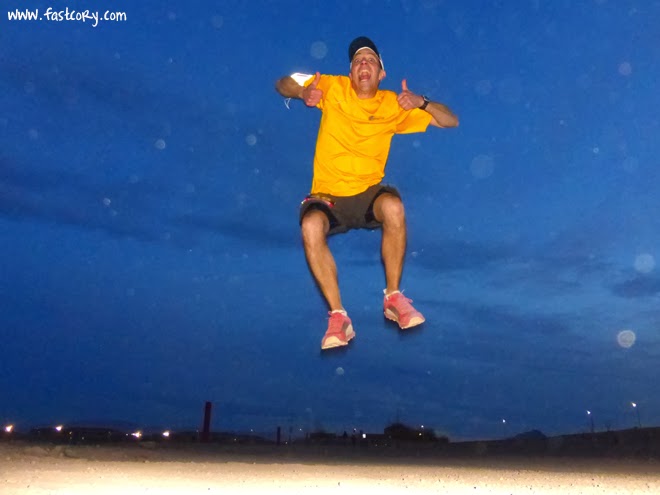 With four miles left I broke down crying. I'm not a very emotional person but I had that kind of uncontrollable crying where you can't see straight. This happened during my first 100 miler too. At that time it was because my legs hurt so bad. This time it was because I was so completely overcome with happiness. I've always felt kind of inadequate as a runner. I always thought it would be impossible for me to finish a 100 miler faster than 24 hours. I would have never, ever believed it. And now it was about to happen. It was my happiest running moment ever. 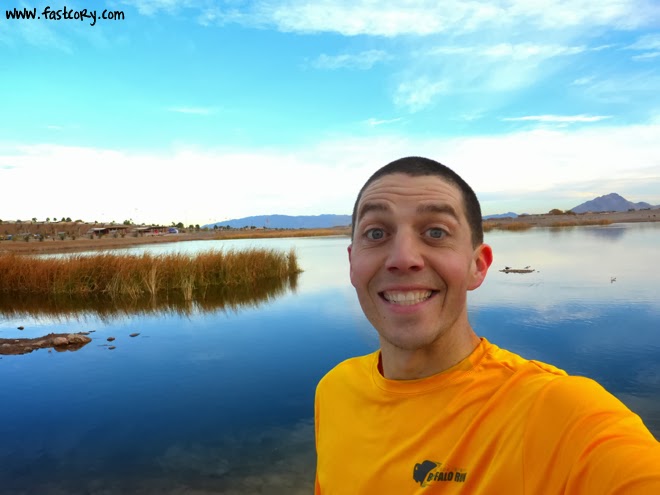 I stopped before I got to the finish line. I wanted to breathe in every bit of this experience. The impossible.......happened. 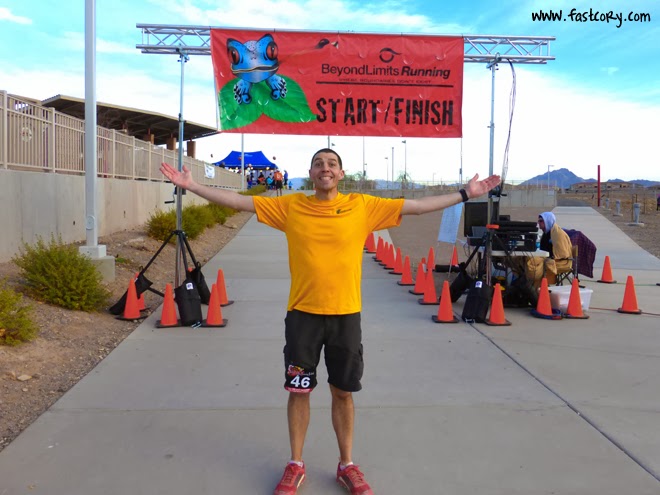 That beat my previous fastest time by almost five and a half hours. Words can't describe the happiness that filled me. It was amazing watching so many other runners finish; watching others who had also pushed beyond what they thought was possible. And then about three hours later someone else accomplished something incredible. Susette met the finish line of a 100 miler. (You can check out her blog HERE, I'm sure a race report will come soon.) 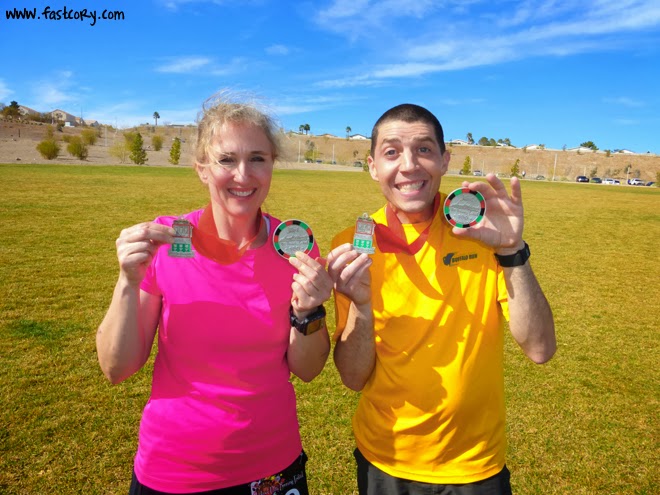 The Jackpot Ultra Running Festival is put on by Beyond Limits Running. I can't recommend this race highly enough. They took great care of the runners and certainly exceeded expectations. Runners of the 6, 12, and 24 hour races got a cool medal. 100 milers got that medal plus a big belt buckle. I will never forget the amazing people I met, the kindness they showed, the encouragement they gave, and the happiness I felt at this race. 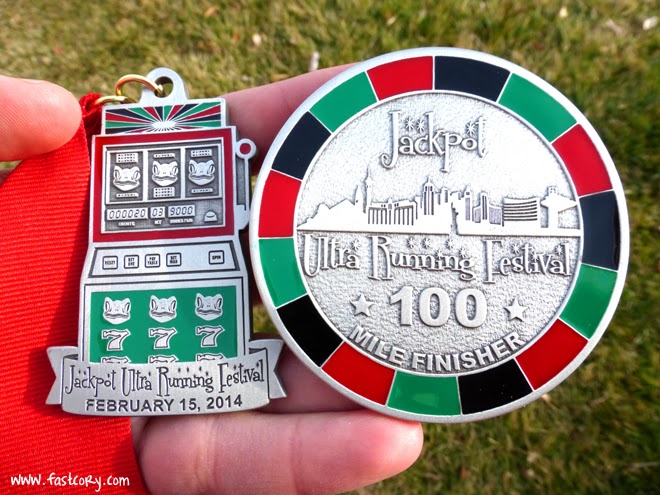