At least the zombies were friendly.

I saw zombies stumbling all over the place. I WAS one of those zombies! It was in the middle of the Utah desert. The heat was somewhere around 8,172 degrees. I've never seen the show The Walking Dead but I'm convinced that they could film the show at mile 90 of 100 milers and avoid paying lots of money for a cast.

But all the zombies I saw were friendly. They just wanted to get to the finish line, have someone hand them a belt buckle, take off their shoes, and try to avoid dry heaving. This is the awesomeness of an ultramarathon.

31 hours before The Walking Dead, hundreds of runners stood at the starting line of the Zion 100. I have run the Zion 100 each of the three years since the race started and I was psyched to be starting my fourth Zion 100. The race begins with an immediate slap in the face named the Flying Monkey Trail (also known as the Zion 100 conga line). Then you get to a part where there is a strategically placed rope to hoist up your not-dead-yet body. I took a casket load of pictures (um, around 300 during the race) so it's hard to narrow down which ones to include in the race report. Here is one of those pictures showing off the view at the top. 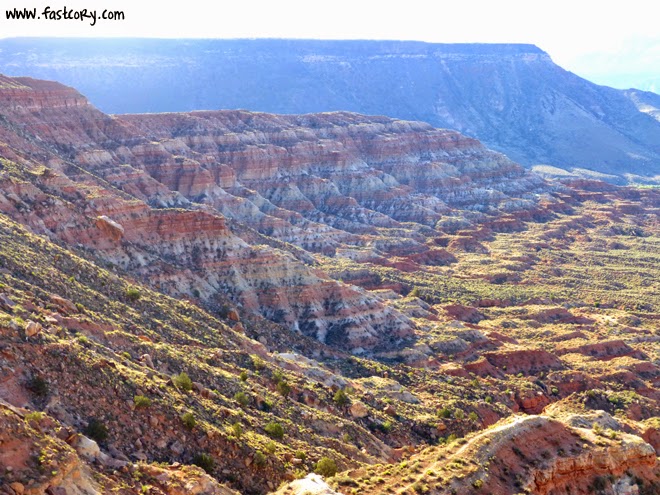 Here's an interesting tidbit: after running a bunch of miles around the top of the mesa we went back DOWN the Flying Monkey Trail. That was a new twist this year. And then once we got down there was more climbing, lots and lots of climbing, and then we reached the Guacamole Trail. It's rolling, twisting, turning slick rock that makes your calves feel like their being rubbed by cheese graters. But the views.....just wow. 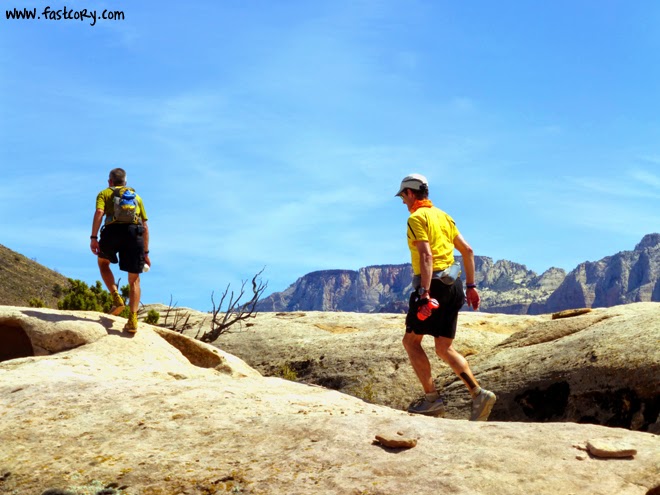 After lots of cheese grater miles we went back down the same way we came and then headed toward the most brutal climb I have ever witnessed in any race I've ever run. It's a trail torture chamber to the top of Gooseberry Mesa. It climbs 1,500 feet in one mile. The trail is vertical. It's loose dirt and rock so it feels like turning a skating rink at a 45 degree angle and then trying to climb up it. (Here's another interesting tidbit: you get to go DOWN this trail at mile 69....in the dark.....when your legs feel like chocolate pudding.) 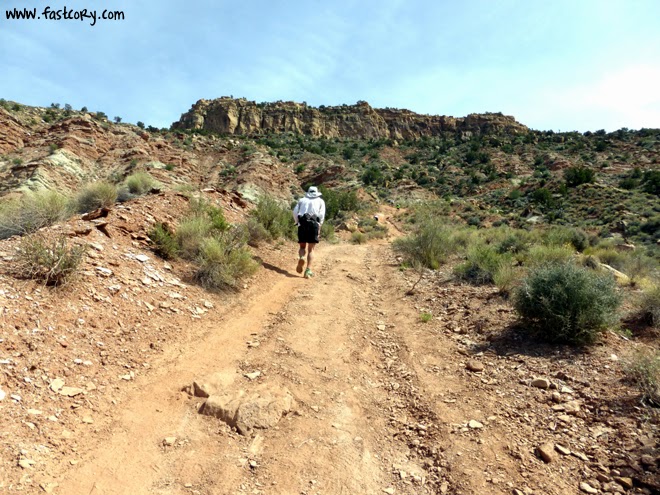 When Meatloaf sang "I would do anything for love, but I won't do that", he was singing about climbing up the Gooseberry Trail. Even the most manly man in the world, Chuck Norris, would have an emotional breakdown if he saw this trail. Aside from the suffering, it is hilarious watching everyone go up this thing. They take three steps then hunch over to catch their breath. The trail is strewn with runners who look like this: 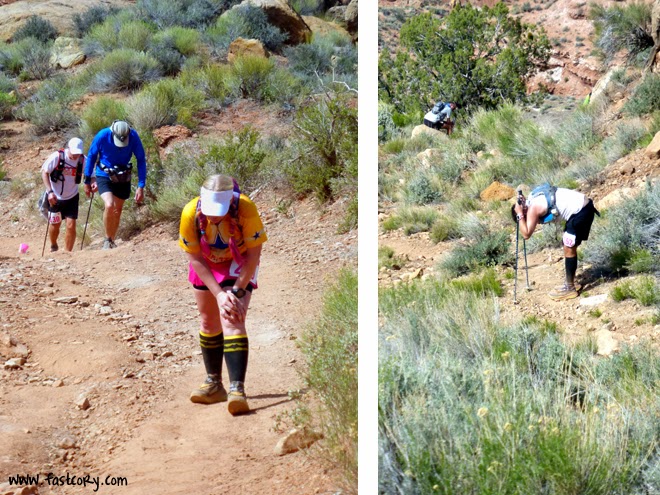 The view at the top is stunning. It's incredible to think about how a mile ago you were standing on the valley floor. 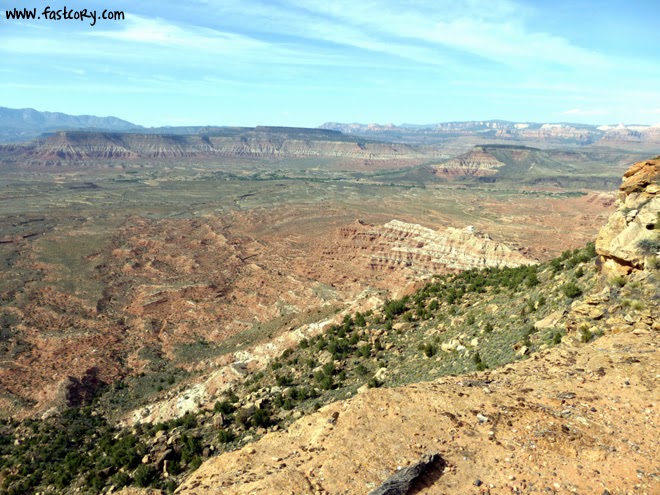 On my way to Gooseberry Mesa I had my scariest experience ever while running. I was running with my friend Terri and we were suddenly enveloped in a cloud of bees. I have never seen anything like it. They were all around us. Here's the thing - I'm deathly allergic to bees. Soon the bees left and neither of us were stung once. It was truly a miracle. I really feel like some guardian angels were watching over us. On top of Gooseberry we passed by these bees that weren't going anywhere, but the swarm earlier in the day was much, much bigger. 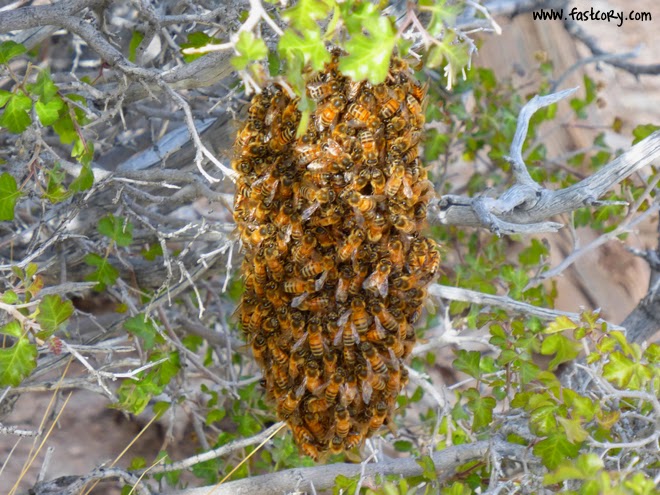 Many times throughout the race I thought about my friend Alisa. We went to high school together and have been friends since. She is battling cancer and is the bravest, most courageous person I know. When I was struggling or going through a dark time I thought of her and tried to have a portion of the strength and bravery she has. I took one jumping picture during the race. It was at mile 41 at this location called The Point. It's my favorite part of the whole course. Guess what happened during this jump - my shorts ripped at the crotch and I had to change my shorts at the next aid station! It was an unfortunate wardrobe malfunction. Worth it? Indeed. 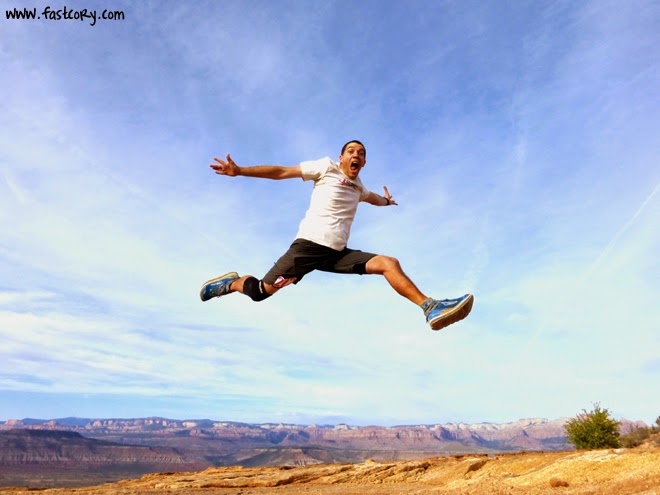 I tried a new foot lube (yes, I broke the cardinal rule of never trying something new on race day). I think it worked good but it made one of my shoes squeak. It sounded like a cat meowing. I know it wasn't the shoes because I wore the exact same pair of Altra Olympus shoes at Monument Valley last month and didn't have any issues. You think running an ultra would drive you crazy? Try having a cat meow at you every other step for 100 miles! 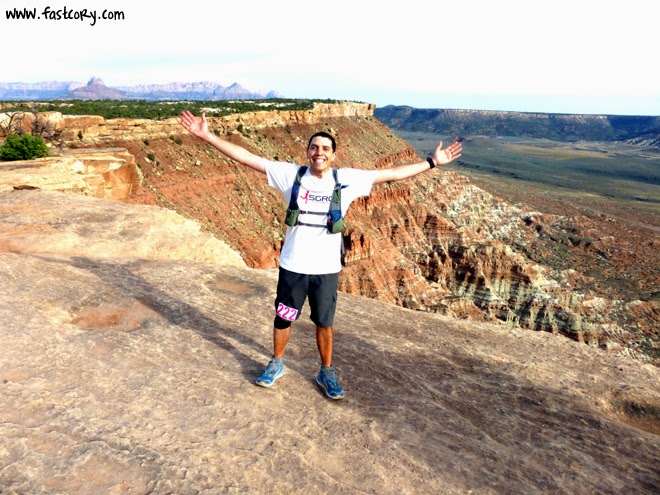 For the last three years I have been trying to get the perfect picture of a runner on the edge of the Gooseberry Mesa cliff. This year I FINALLY got it! Fourth time is the charm! (This is my friend and fellow bee magnet Terri.) 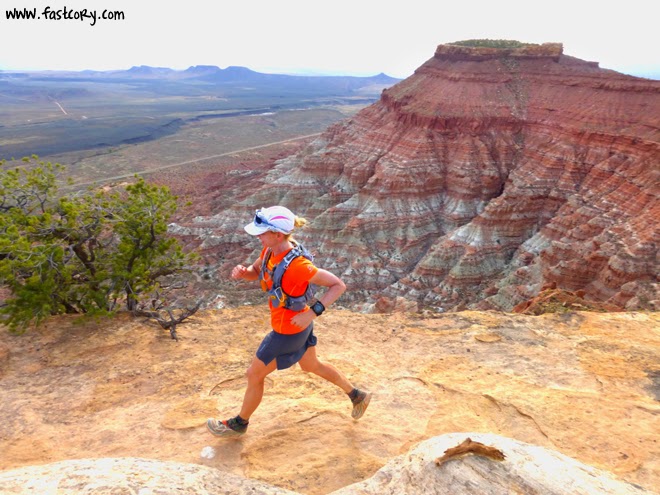 One of my absolute favorite parts of this race was having Mel and Jackson crew almost the whole time. They met me at aid stations, helped get supplies, provided moral support, and at one stop even had chips and queso dip in the car. (I proceeded to eat WAY more chips and queso than a human being should be eating in the midst of a 100 miler.) Having this family support meant so much to me. I saw them one last time before they headed home for the night. We witnessed a positively stunning sunset. (Sock monkey hat courtesy of my daughter.) 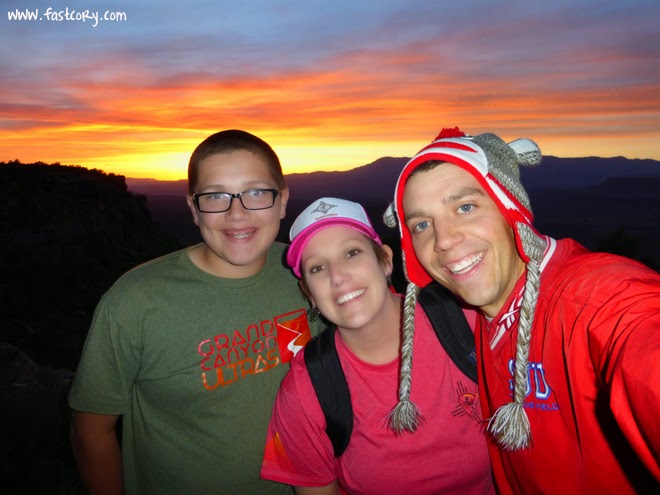 After they left I headed out into the darkness of night. I was at one of those low points where I felt really tired and zapped of energy. I didn't think about dropping out but wondered how in the world I could keep going for another 50 miles. (The answer to that question is: one step at a time.) 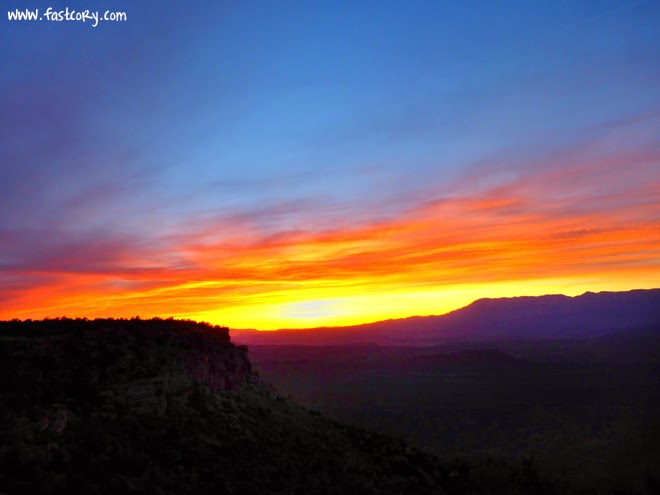 In the middle of the night I struggled to stay awake. I really hate that feeling of sleep walking and then stumbling myself awake. I decided I'd lay down right in the middle of the trail and take a shoe nap, I mean cat nap. (Get it?) I figured laying in the middle of the trail would assure that I wouldn't sleep too long. I kept my head lamp on thinking that might prevent a mountain lion from eating me. I looked at my watch then tried to sleep. I made it two minutes before runners arrived and asked if I was okay. Cat nap over. Time to keep moving. After approximately eternity I saw my second sunrise of the race. 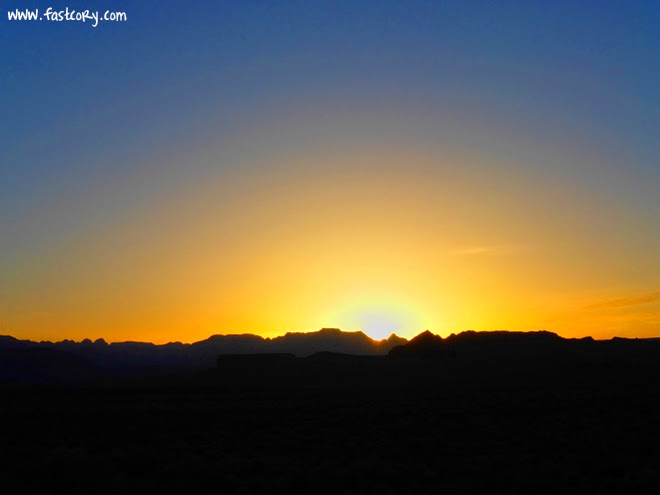 I started seeing mountain bikers on the trails and I wanted to body slam them into the slick rock and then steal their bike. Then I remembered that the muscle composition of my body is .04% so I just let them pass instead. Mel and Jackson came out to crew again on the second day and Mel ran with me for seven miles toward the end. She kept me moving well and ignored when an involuntary whimper would leave my mouth. 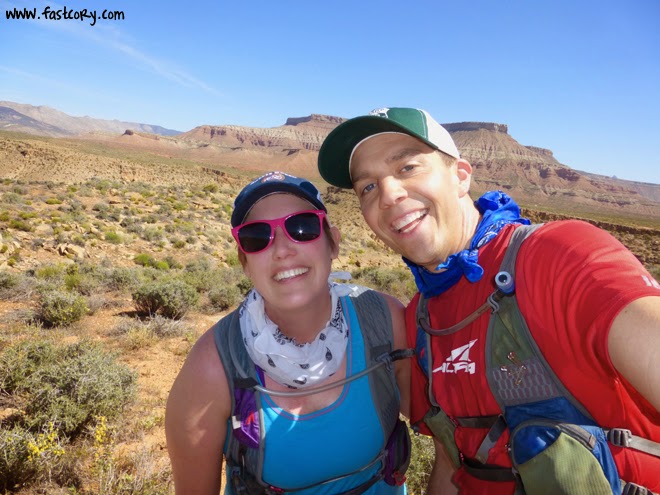 I was ecstatic to be nearing the finish line. This was the view at mile 97: 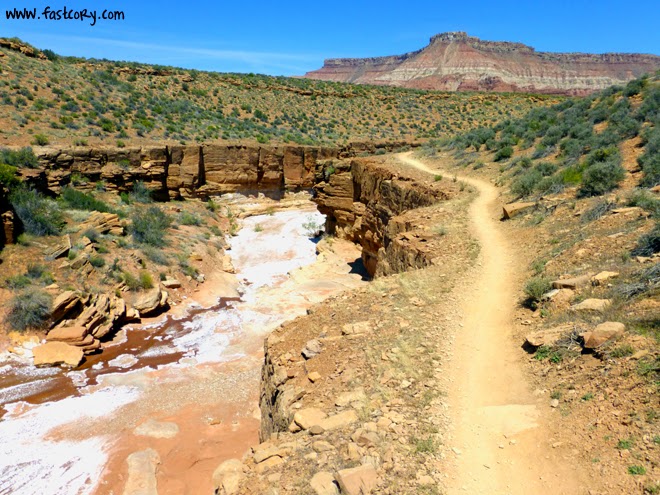 I still can't fathom that a human being, any human being can propel themselves forward nonstop for 100 miles. Bodies are really amazing things. I crossed the finish line with the biggest jump my legs could give. I think my face was saying "Hmmm, that ground is going to hurt when you touch down in a second." 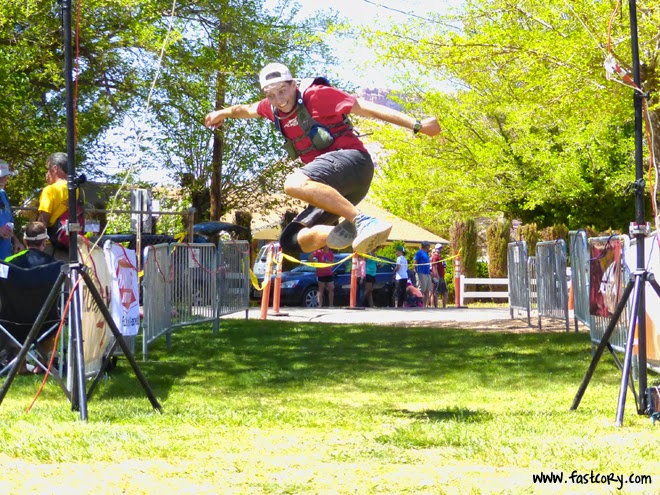 I was so happy to be done after 32 hours and change that I kissed the ground beneath my feet. 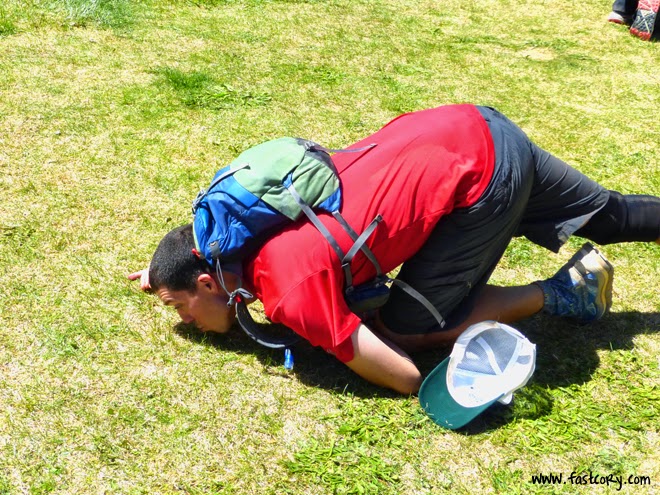 Each buckle is handmade and unique using materials from the course. I looked at lots of buckles and this one whispered that it wanted to come home with me. 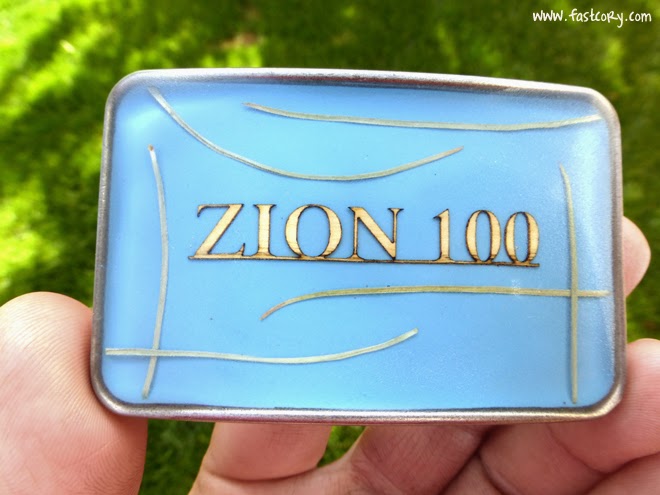 A race like this takes an incredible amount of support to be successful. I'm so thankful for St. George Running Center, UltrAspire, Tailwind Nutrition, Altra, the Ultra Adventures team, the AMAZING race volunteers, my awesome wife and family, and God. It was definitely a team effort.

Ultramarathons have a way of stripping you bare. All the outside layers are peeled away like an onion and you are left alone with your doubts and fears and a finish line that feels like an eternity away. But step after step, minute after minute, hour after hour that finish line gets closer. And when you find it all the doubts and fears vanish, replaced by triumph.
Posted by Cory Reese at 9:03 AM