Recently I took Jackson to some major league baseball games in Phoenix for his birthday. He wrote up this summary of our experience.

It was just a casual Monday night. I had just gotten home from doing stuff with my friends and had settled down to rest after a long day when my mom yelled that she wanted to talk to me. My natural instinct was “What am I in trouble for this time.” However, when I got down to their room and was expecting the worst, my parents suddenly told me that I was getting my birthday present a few days early. My dad handed over tickets to two baseball games. Arizona Diamondbacks vs. Colorado Rockies. I was more than excited and simply couldn’t sleep well the next two nights before we left for Phoenix. I was so grateful to be able to go to an MLB game. Even though I’m a Chicago Cubs fan, I was ecstatic that I would be spending some time at Chase Field over the next few days.

When we arrived at our hotel, I fell onto the bed. Our drive was horrific. There are two ways to get to Phoenix from where I live. My dad chose the wrong one. My dad and I resolved that it would be a good idea to take a quick nap before the game. The idea didn’t work so well. I was just much too anxious to sleep when I was just hours away from attending my first Major League Baseball game. Eventually, we forfeited the idea and decided to go the game a bit early.

When we got to Chase Field, we went up close and took some pictures, watching batting practice, etc. I even managed to get on the scoreboard! Unfortunately, the cameraman cut my dad out of the picture. Just prior to the first pitch, we headed up to our seats which were in possibly the best section in the entire stadium. Section 221, the All-You-Can-Eat section. With seats in this heavenly area, fans can consume unlimited amounts of hotdogs, chips, peanuts, popcorn, and soda. 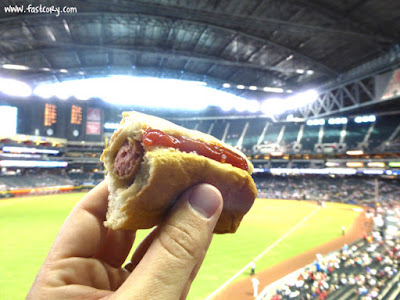 Towards the end of the game, my dad decided to post a couple of pictures from the game on Facebook. By coincidence, a fellow ultra-runner, Chad, who follows my dad was also at the game. My dad thought it would be cool to go over and meet him. When we got over to his seats, he was so kind and offered me a game ball he had gotten during batting practice before the game. I was jumping up and down when he plopped the ball into my hand. It is now sitting in my room in a protective baseball case. 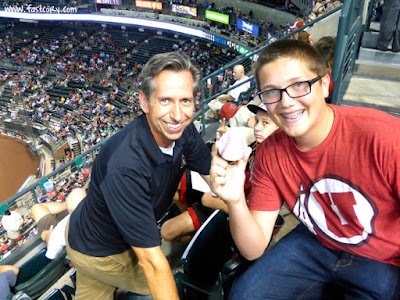 After meeting with Chad and his family, we watched the final few innings of the game and then headed back to the hotel. Diamondbacks ended up crushing the guests 8-1.

Back at home before we left for the trip. We wondered what we should do the entire day before the second game. We came to an agreement to take some tours. First we took at tour of Chase Field. The tour was amazing as we were allowed to go in the interview room, the press box, and even into the Diamondbacks dugout! 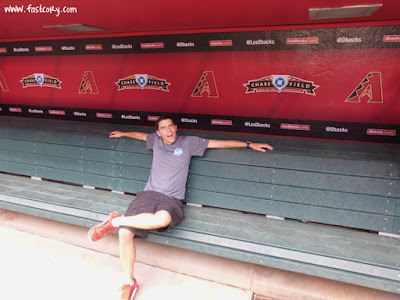 After a quick lunch break at Chipotle, we headed over to the University of Phoenix Stadium, home of the Arizona Cardinals. The stadium was huge, holding just under 75,000! 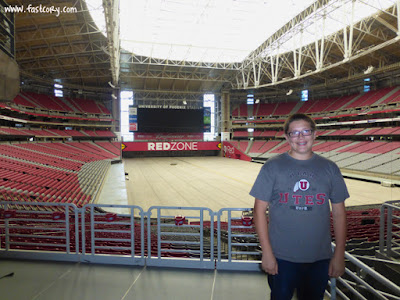 Something interesting we learned was that the field is always outside except on game days. We got to go into the locker rooms and onto where the field would be. The field is outside so it can get sunlight and then is rolled onto the field for games. Very clever engineering. 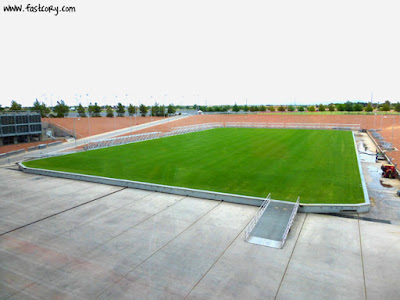 After a quick pit stop at McDonald’s, we made our way back to Chase Field for the final game of our stay. We took some tips from Chad and came right when the gates opened in an attempt to get a ball from batting practice and maybe an autograph or two. I patiently waited next to the Diamondbacks dugout hoping to get an autograph on my game ball while my dad sat in left field trying to obtain a ball. I got extremely lucky as Dbacks outfielder, Danny Dorn, decided to give a few autographs. I was one of the few who got his signature. After my dad waved the white flag, I continued waiting until less than 10 minutes before first pitch. The players had come out to stretch. This was the chance to get another autograph. As time ticked by, a few players strutted towards where I was standing. The first to grab my ball, arguably the second best Dback, David Peralta. I was amazed to have his autograph. BUT WAIT… then the enjoyment got even better. All-star first baseman, Paul Goldschmidt, took my ball. I can’t believe I got three signatures with one of them being from an all-star. The long wait had payed off in the end. 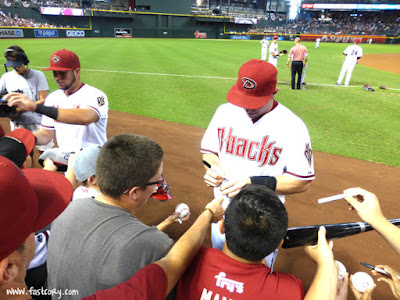 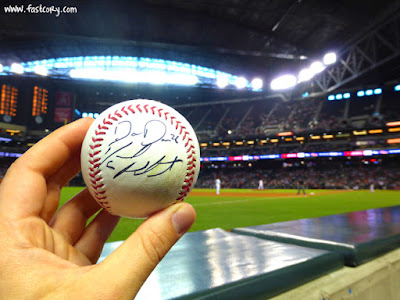 We then ventured to our front row seats along the third base line. We were so close to the action. This game ended up being much closer than the one the previous night. With it being 3-3 in the 9th, we prepped ourselves for extra innings. After the Rockies failed to score, the Diamondbacks had catcher, Wellington Castillo, on third base in the bottom of the tenth. With only one out, Cliff Pennington, hit a sac fly deep into left field bringing the winning run in. It was a very entertaining game. I thanked my dad for giving me such a great birthday present. It was a brutal ride home the next day, but it was all worth it to be able to see my first Major League Baseball game. 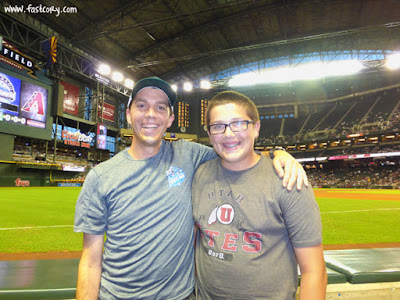 EDITOR'S NOTE: Jackson failed to mention that on the second night we each ate something unique to the Arizona Diamondbacks ball park: THE CHURRO DOG. This insulin-destroying gut bomb includes a churro inside a doughnut covered by frozen yogurt, chocolate, and caramel. Thank goodness they went with the healthier option of frozen yogurt instead of ice cream. Otherwise this would have been utterly indulgent and ridiculous. I believe the two goals of the Churro Dog are 1) To give you diabetes, and 2) Make you hate yourself. 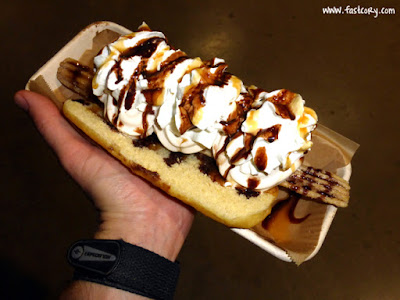