I can barely remember what I ate for breakfast yesterday. But I still remember an article I read in the March 2013 issue of UltraRunning Magazine.

That article was written by John Medinger who owned and wrote for the magazine for many years. I got to know John and his wife Lisa through the magazine and have always respected his instrumental role in the growth of ultrarunning. It was great to catch up with him on the trails while running the Bryce 50. 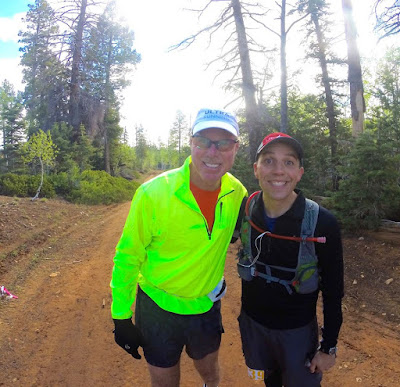 I think his article stuck with me through the years because I realized that I was right in the middle of "the good old days". I realized that I had started to take running for granted. I started to get more focused on a destination instead of enjoying the journey. Now I work really hard to make sure that doesn't happen.

John has very graciously allowed me to reprint his article here. I hope you love it as much as I did. May we all focus a little less on the destination and instead enjoy the journey! Here is John's article:

It was a sweet spot in time; we just didn’t fully realize it then. If no other specific plan was made, the default was to meet at the usual trailhead at 8 a.m. on Saturday, ready to run 20 or 30 miles.

We were an eclectic bunch: a building contractor, an Algebra teacher, a chef, a corporate executive, an English literature professor, a banking regulator, a physical therapist, an artist who paid the bills by working as an electrician. At first we shared little in common but a love for ultras and all being approximately the same speed. But there’s lots of opportunity in the long gray miles between the start and finish of a six-hour run. We shared running tales and talked of sports, books, movies, and everyday life. And then, eventually, more personal stuff: politics, problems at work, relationship issues, hopes and dreams.

Others would often join us, but the core group of regulars was unusually reliable. The Oaktown Gang, we called ourselves – we weren’t a club, or an insular group closed to others. We just were; you earned your membership (such as it was) by simply showing up.

We traveled to each other’s races to crew, pace, and support. We shared in the experience, cheered each other on, celebrated the finishes and yes, sometimes joined in the bitter taste of failure. None of us were a threat to win anything. We were merely competent, typically somewhat faster than the middle of the pack. We set our own personal goals, which were usually immaterial to everyone else. We did the best we could.

Bonds were formed. Bonds that quickly ran strong and deep, of a type not commonly found among casual friends. We soon came to know each other’s hot buttons, and – like siblings – pushed them regularly. We teased each other mercilessly, but took umbrage if someone outside the group dared to do the same.

We shared the nervousness of competition, a heightened sense of adventure, a passion for achievement. We shared the thrill of the mountaintop and the dark abyss of never-ending miles in the middle of the night. The joy was in the process – the slogs through the mud, the hot, dusty descents, the frozen nighttime miles high in the mountains. The finish line was merely a dividend.

Now, nearly two decades on, we are still the best of friends. Not without changes, of course, change being inevitable. A couple of us moved away, a couple of us got married (no, not to each other, but – no surprise – to other ultrarunners). We all still run, but only a couple still regularly run ultras. Age takes its toll, injuries mount, desire wanes, life intervenes.

To those of you reading this who find all of this somewhat familiar sounding – and I know there are many of you who do – take a moment to reflect on your situation. Many of you are in that sweet spot in time right now. Savor what you have, relish the moment. This is really good stuff and it’s not going to last forever. For you, these are the good old days.

And for the Oaktown Gang, there is but one thing I can say: one tribe, y’all.
Posted by Cory Reese at 8:02 AM