One of the things I've had on my running bucket list is to do a Grand Canyon Rim To Rim To Rim run. Basically you start at one rim of the Grand Canyon, run down into and across the canyon, then up to the other rim....then turn around and go back. Over the weekend I finally checked the Rim To Rim To Rim (R2R2R) off my list!

On my way to the Grand Canyon I made a few stops along the way to hit a few scenic spots including Horseshoe Bend, Arizona where I captured possibly my favorite jumping picture ever. (You should have seen the speed workout I got after hitting the 10 second timer on the camera then running to the ledge!) 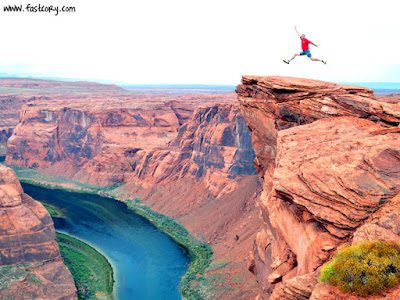 Last year I ran the Grand Canyon 100 but had never actually gone into the canyon. I was very nervous about the weather. It rained the entire day before my run. When I arrived at the North Rim the night before my start it was snowing! 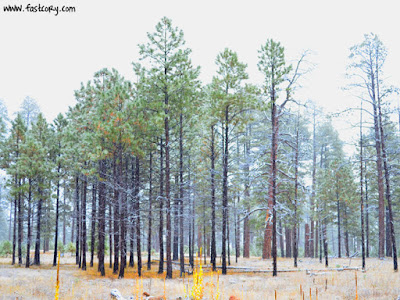 Friday morning when I started running, the clouds had cleared but it was bitter cold. You never want to start a run when it's so cold that penguins are hanging around. I wasn't familiar with the area since I had never been here. I had been running for a while in the dark and then the trail split. I didn't recognize the names of either trail and realized I went the wrong way so I turned around (which added an extra three miles to my trip). Alone in the dark I looked around at my surroundings and it just seemed like if anyone was going to run into a Sasquatch, this would be the place. 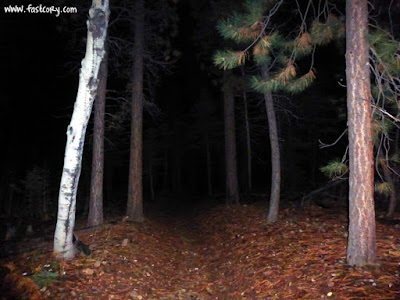 I finally found the right trail and began the steep descent from the North Rim. I couldn't help thinking how much it was going to hurt going up that trail many, many hours later. The trail hugged the edge of the mountain and I was amazed at the ingenuity of people who somehow carved a trail out of sheer cliffs to get to the bottom of the canyon. 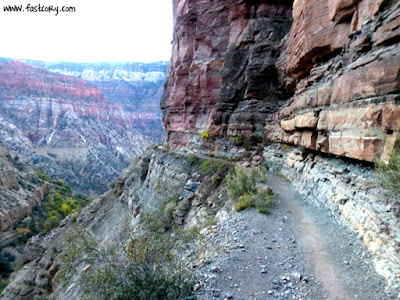 The total length of the trail from the North Rim to the South Rim (via the Bright Angel Trail) is 46 miles (IF you're not a moron who gets lost before the run even starts). Over those 46 miles you cross lots of streams and rivers. I loved all the bridge crossings. 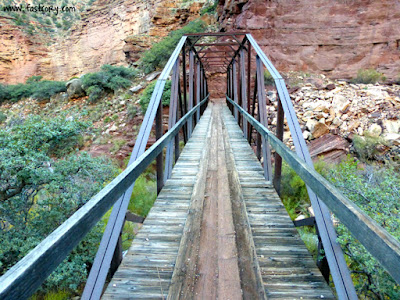 I was close to the bottom of the canyon when the first light of day started touching the top of the cliffs. I assure you that pictures don't come anywhere near doing justice to the incredible scenery. The Grand Canyon is too expansive to capture in a single picture. 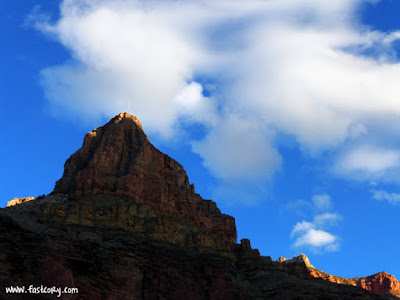 I came around a turn and looked up at the mountain. This view of the moon next to the mountain gave me goosebumps. And it wasn't because it was still really cold outside. 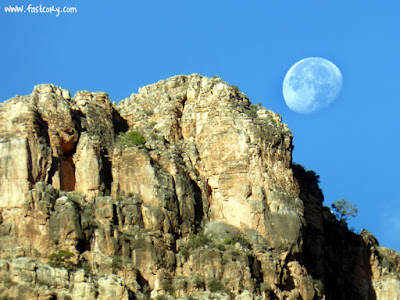 Thanks to the amazing Grand Canyon R2R2R Facebook group I knew that it was important to take a little sidetrack route to see Ribbon Falls. I heard the views were certainly worth the extra mileage. They weren't kidding. Ribbon Falls was amazing! I hadn't seen another soul all day so I had time to enjoy the falls all to myself. 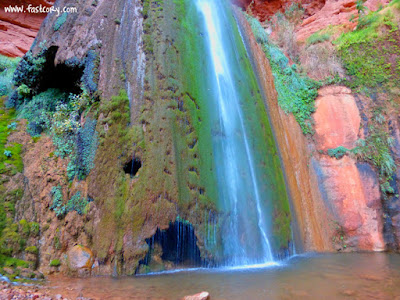 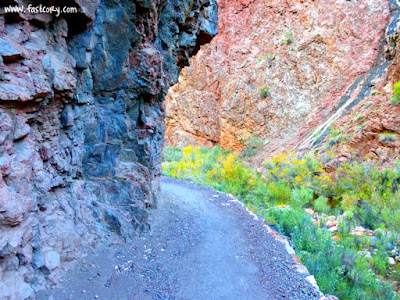 They were doing some repairs on the water pipeline and some water faucets were turned off for the year. Since I didn't know how often I would have access to water I tried to conserve and didn't drink nearly as much as I should have. I later paid dearly for this. 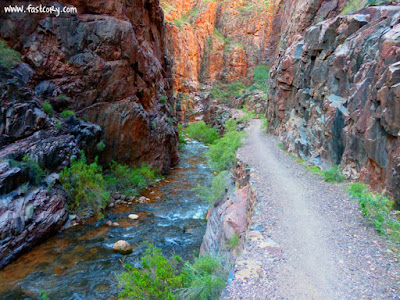 At the bottom of the canyon is a little compound called Phantom Ranch. They have some small bunk cabins, a campground, and very little store where you can pay $14 for a sack lunch. I'd heard that it is mandatory to buy lemonade from Phantom Ranch. If not, they take your firstborn child, give you paper cuts between your toes, and make you listen to Celine Dion music. I didn't want any of those things to happen so I bought some lemonade. 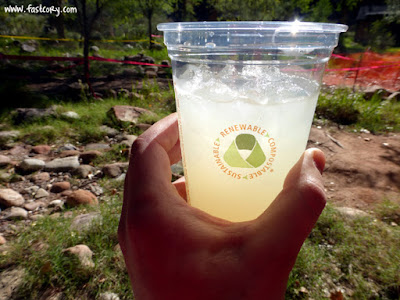 As I was running I heard an airplane fly high above me. I thought about how amazing the Grand Canyon must look from 30,000 feet. And then I thought about how incredibly lucky I was at that very moment to be standing right in the middle of that amazingness. 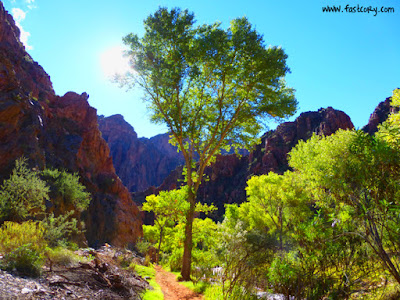 By this point I was right in the heart of the canyon. I was feeling fairly good overall. For years I've gazed in envy at pictures of runners at the enormous suspension bridge that crosses the Colorado River. It was so cool to finally be there myself. 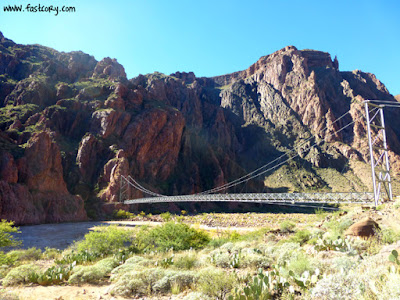 Soon enough I began the ascent up to the South Rim. I am deathly scared of heights. So at certain points I had to really stay focused on the trail two feet in front of me....and ignore the fact that this trail was right on the edge of a cliff.....while repetitively whispering "Don't. Die. Don't. Die. Don't. Die."(If you look really closely you can see two people on the trail.) 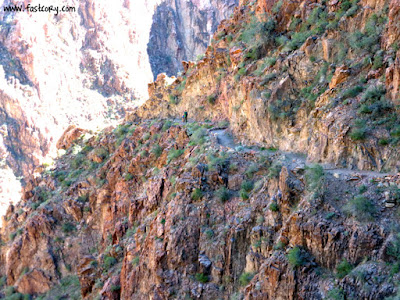 As I got closer to the South Rim I started seeing campers. And hiking tourists. And large quantities of selfie sticks. So. Many. Selfie. Sticks. And a mule train. Ah, the smell of mule urine in the afternoon. 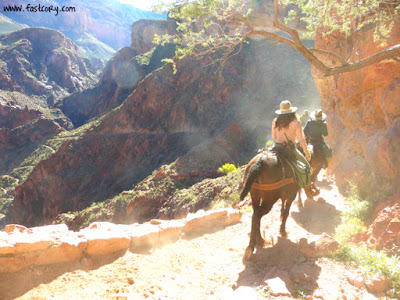 I passed the notorious Grand Canyon Warning Sign. It says that the Grand Canyon is dangerous and warns you to avoid dying if at all possible. In the Declaration of the National Grand Canyon Association of America, the bylaws clearly state that anyone who runs in the Grand Canyon MUST take a picture with this sign. Go ahead, read any Grand Canyon report. You'll see that this is no joke. I didn't want to be kicked out of the canyon so I took the picture. 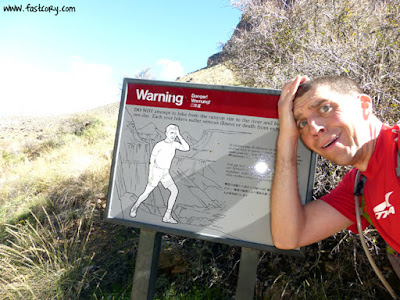 With the whole "Oh crap, I'm lost" incident at the beginning of the day and the detour to Ribbon Falls, I was farther behind schedule than I preferred. And that dehydration caught up with me. I felt completely worn out. I was apprehensive about turning around and going back into the canyon. I can't put into words how daunting it is to drop into the Grand Canyon, climb your way out, and then stare at the wide open mouth of the canyon you are about to drop into again. 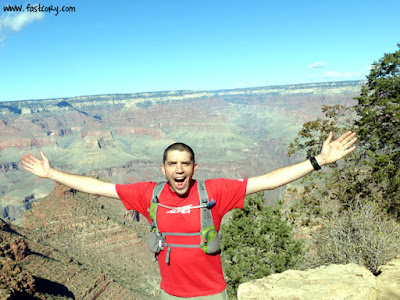 I did some self-talk and reminded myself that I was in the midst of something I had wanted to do for a long time. I was doing something I would be proud of myself for. I am strong. I am brave. I can do this. I CAN DO THIS. So I turned around and entered the Grand Canyon.....again. 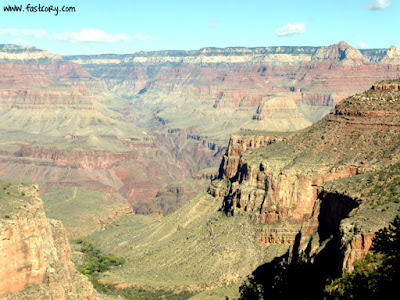 Somewhere in the bottom of the canyon something terrible happened. I had been running with my nice $100 Black Diamond trekking poles. And then I realized that I WASN'T running with my trekking poles. CRAAAAAAPPPPP! I must have set them down when I went to the bathroom and forgot to grab them. I figured they were about a mile and a half back. Do I turn around and get them, or leave them? I couldn't leave those expensive poles so I turned around to get them. But they weren't where I thought I left them. CRAAAAAPPPP!!! So I added ANOTHER three extra miles....and still lost my poles. The 46 mile R2R2R run was now closer to 53 miles. That foolish mistake ate at me every step of the rest of the run. 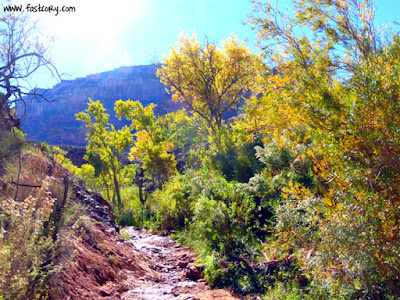 I passed by Phantom Ranch again on the return trip. Watching the sun set on the canyon was breathtakingly beautiful. I had many more hours alone in the dark as I climbed out of the canyon again and up to the North Rim. It was cold and windy and I was having a hard time staying awake. But it was the kind of bliss-filled exhaustion when you know you've worked really hard for something. 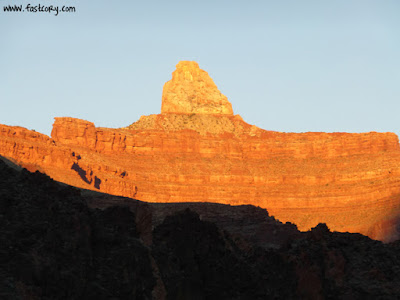 My Garmin died so I'm not sure exactly how long it took, but between the extra miles and the hundreds of pictures I took I ended up taking between 17-18 hours. I crawled into my makeshift bed in the back of our Durango and slept like a baby....too tired to even dream of penguins and Sasquatch and mule urine. I woke up a few hours later at the light of day and looked back into the Grand Canyon full of gratitude for such an amazing experience. 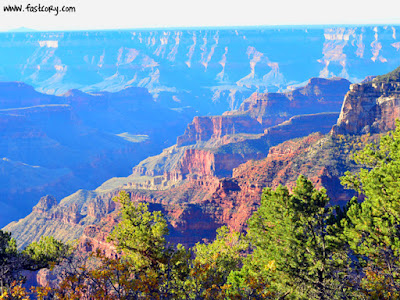