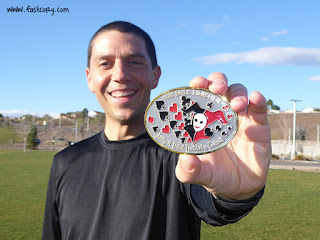 My wife Mel has a love/hate relationship with running. Approximately 3% is love. And the other 97% is hate. So you can imagine my surprise when she said "Maybe I'll do the 48 hour race with you!"

Months ago I was talking with her about the Jackpot Ultra Running Festival in Las Vegas. I told her I was planning to run the 48 hour race and asked if she wanted to run too. (Jackpot has 12 hour, 24 hour, marathon, and 100 mile distances as well.) She said she wanted to come along. And she set a goal to reach 50 miles in those 48 hours. With timed races like this, you just go as many miles as you can within your time limit. No cut-offs, no DNFs, you just do what you can do.

We rented this sweet rig from Escape Camper Vans for the race because Mel said she wasn't going to run during the nights, so this would be a cozy spot to sleep. Plus, it gave people an easy opportunity to say "If this van is a rockin', don't come a knockin'." Because the stink of runners in the middle of an ultramarathon is a huge turn-on. 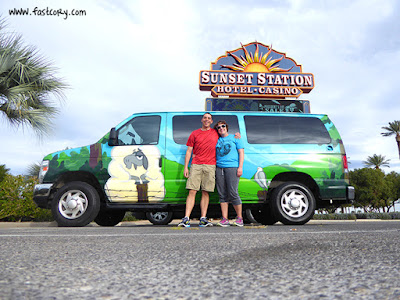 Jackpot is a 2.38 mile loop around Cornerstone Park, a wildlife reserve area with a 31 acre lake. There is a mix of pavement and smooth dirt trails that make it a fast course. A loop race has its challenges mentally, and some people get bored doing loops. But for me personally, I think they're pretty fun. I like getting to know fellow runners, and you're never too far away from an aid station. Given the choice, I still love trail races, but I certainly don't mind loop courses. 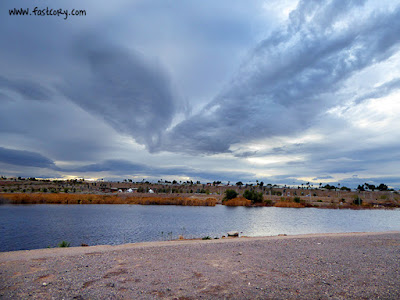 I spent many loops running with my friend Ed "The Jester" Ettinghausen. Ed is one of my running heroes and has always been an inspiration to challenge my limits. He has been a source of encouragement and support ever since I started running ultras. 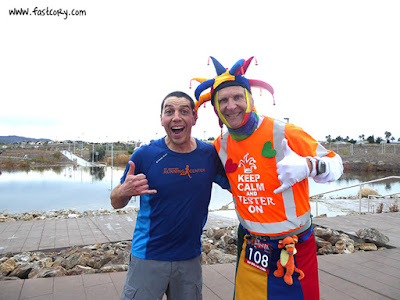 Ed holds the World Record for the most 100+ mile races in a year (40!!). I had the pleasure of running many of those races with him. Any race where I get to share miles with Ed is a good race. 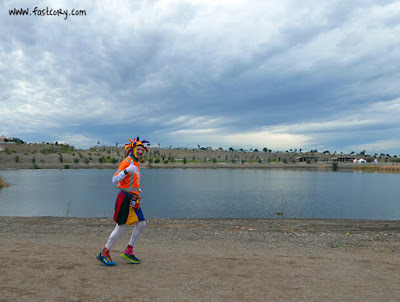 Cornerstone Park is home to many different kinds of birds. It was funny to listen to geese honking incessantly throughout the day and night. One person writing about Cornerstone Park on Yelp said "It's difficult to enjoy the scenery here when you're being swarmed by 10 pound hell beasts. Almost lost fingers." Mainly, I just wanted to add her comment because the phrase "10 pound hell beast" is really funny. I didn't 1) Get swarmed by any hell beasts, or 2) almost loose any fingers. (Disclaimer - the following picture is NOT a hell beast.) 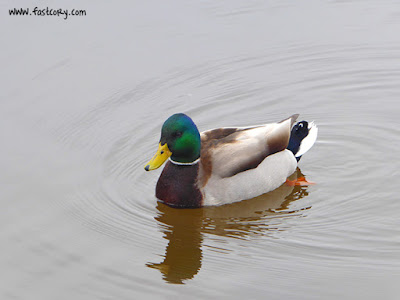 Now let's talk about Mel for a minute. The fact that she was even out there is pretty awesome. She hasn't had the greatest experiences while running. (Take, for example, a year we ran the St. George Marathon together. The pre-race lines at the porta-potties were gigantic so many runners headed for the hills in the dark right before the race for a quick bathroom break. Mel did the same. Remember, it was dark. Well, she stepped in someone's poop. And then I won the Husband Of The Year Award for running with her for the next five hours while she smelled like poo.) She did so good at Jackpot. She didn't go fast, but she maintained a steady pace hour after hour. 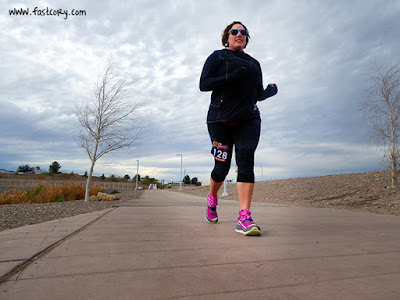 I ran the Jackpot 100 miler back in 2014 and set my 100 mile PR of 22 hours, 24 minutes. I truly still can't believe that happened. But this year, knowing I'd be running for 48 hours I knew I needed to be more conservative. I just kept a manageable, steady pace, mixing in some running, some power walking, and some jumping. 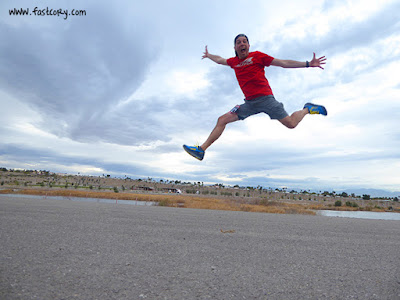 The evening of the first day we got pounded with a storm more fierce than most I've ever seen. The storm system had just come across California causing some mass destruction and massive flooding. When the storm arrived over Nevada, it just parked. It relentlessly dumped rain hour after hour after hour. The storm had a name...I'm not even making this up...it was called Lucifer. LUCIFER!! It was nice to have the camper van during those times with the flooding was the worst. Strong wind actually caused the van to be "a rockin'." 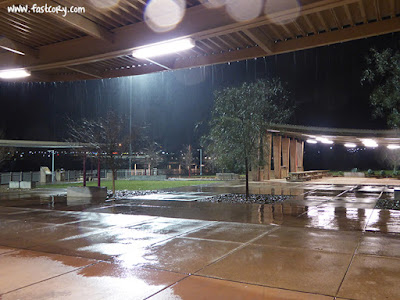 While most people stayed under cover during the worst of the storm, I was so inspired by the few runners who were still out covering miles in the downpour. I was so thankful that the storm mostly broke up mid-morning on the second day. It was great to get some miles with my friend Clair Coleman whose race started Saturday. Clair was one of my crew members when I ran Badwater last year. He has seen me through some very dark times in races and I love him for it. 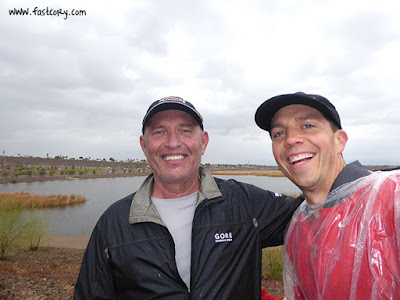 Sharing some soggy miles with Clair... 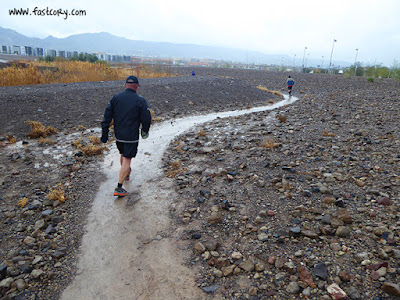 Saturday night something AMAZING happened. Melanie, my wife, the one who stepped in poo and isn't a huge fan of running.....hit 50 MILES!!! I am so, so proud of her. It wasn't long ago that an achievement like this would have been absolutely unfathomable for her. To celebrate, she went to get some non-aid station food. She went to a place called Raising Cane's. HOLY WOW. If eating 2,000 calories worth of friend chicken and fries in the middle of an ultramarathon is wrong, I don't want to be right. 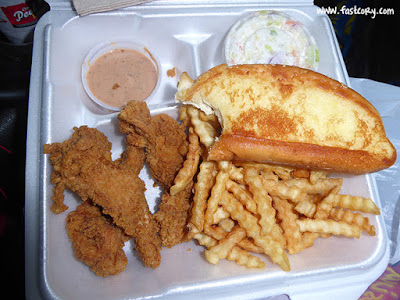 I slept for a while on the second night, then hit the course again at 4am to take advantage of the last four hours of the race. My left knee was being a little bit of a hell beast so I wasn't running much but could keep a steady walking pace. The sunrise after 46 hours was beautiful. 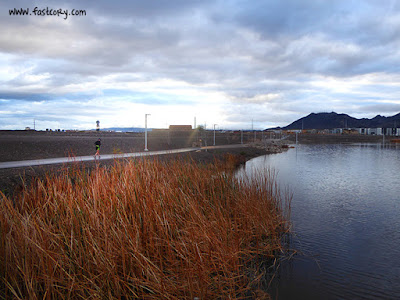 After 48 hours the race was over. I made it to 111 miles which I was very happy with.  And I'm so thankful for my amazing sponsors St. George Running Center, Tailwind Nutrition, Altra, and UltrAspire. I feel very blessed. 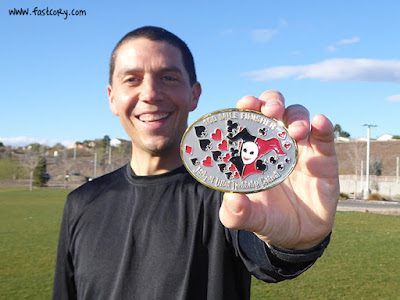 Ken and Stephanie Rubeli with Beyond Limits Running who put on this race are exceptional. They've created such a fun running environment. I can't recommend Jackpot highly enough. It was so awesome to see Mel set a crazy goal...and then go tackle it! Really, that's what ultramarathons are all about. There is a finish line so far in the distance that you can't wrap your head around it. You're not sure how you're going to get to the finish line, except to just keep moving forward one step at a time. A crazy thing happens when you do that mile after mile, hour after hour. You find yourself standing somewhere you weren't sure you'd get to - a finish line! And it feels so, so good. 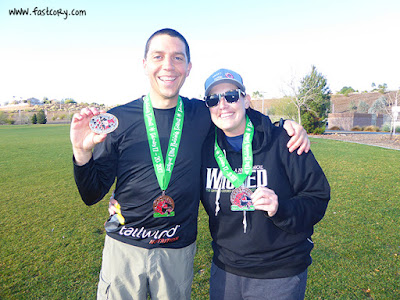