I am quite certain that 2011 was pretty much the most awesome year ever. Except for that time I was in an airport when Gloria Estefan came on the overhead radio system and there was no way to escape. I had to listen to the whole song. That wasn't awesome.

In 2011, running took me to places I never could have imagined. If you had told me at the first of the year that in 11 months I would be throwing up a cheese sandwich after just running a 100 miler, I would have said you were positively nuts. But, in fact, I did run a 100 miler in November. And then threw up a cheese sandwich. Here is my Running Year In Review (HERE is our Family Year In Review). Click on any of the links for the whole story and pictures.

January: Mel and I flew to sunny freezing California on a whim to run the Southern California Half Marathon. Our hotel room smelled worse than an overflowing septic system. A few weeks later we ran the St. George Half Marathon together where some hooligans crashed our starting line picture: 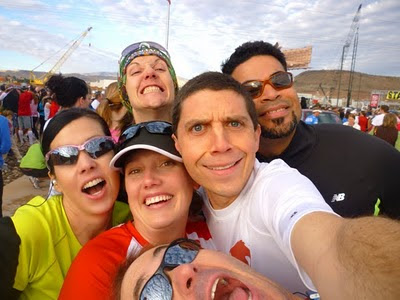 February: The wife and I ran the Dogtown Half Marathon together. I was dared to wear a sassy sequin hat during the race. Challenge accepted. Real men wear sequins. 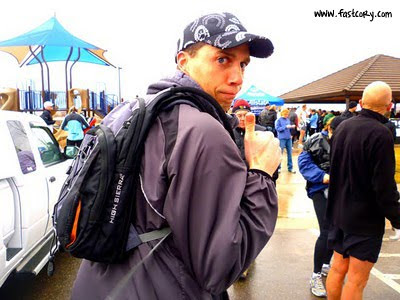 February was also the month where my writing got a bump from an article on Runners World Online. And so began my quest for a respectable jumping picture.

March: Easily the craziest month of the year. The day we were supposed to leave for my first 50 mile race Mel fell and broke her elbows which required surgery. So instead of doing the race, I ran 50 miles on my own. I started running in the middle of the night to finish 24 miles then went right to the Sand Hollow Marathon to run the last 26. I also got my favorite race picture ever: 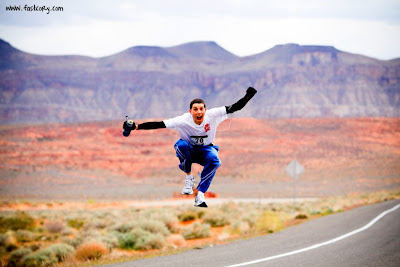 Even though I ran 50 miles, my conscience will only let me count it as a marathon since it wasn't an official 50. Jackson completed a kids race that day and ran the last mile with me. It meant a lot to have Mel waiting at the finish line. Looking back now, I can smile at this picture which looks like we all got hit by a bus. 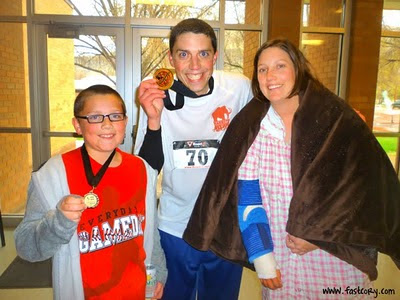 April: A week or two before the Red Mountain 50k my knees threw a big temper tantrum. That was the first time I ever thought "Hmmm, maybe I shouldn't do this race." In retrospect I, um, shouldn't have done the race. Running an ultramarathon on already-crappy-knees didn't help matters. I felt a huge sense of accomplishment making it to the finish line, but learned a valuable lesson that I need to listen to my body better. 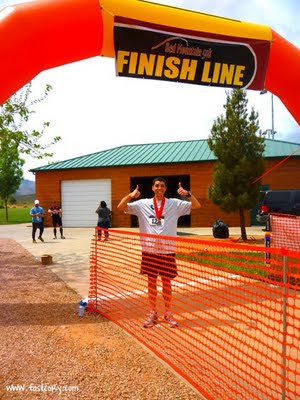 May: Mel and I had a blast volunteering as Catchers at the finish line of the St. George Ironman. I helped some incredible people after they crossed the finish line, including an awesome lady who ran the marathon in Crocs! 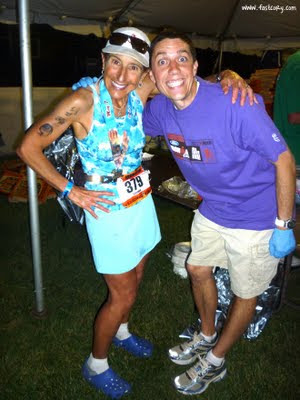 I also ran the Ogden Marathon. Knees were still working on feeling better, and I finished the marathon a comfortable (cough, cough) 18 minutes before the cutoff. Thankfully there is a Hostess store across the street from the finish line. Cupcakes make everything all better. 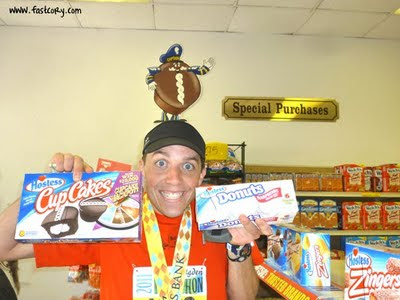 June: I ran the Utah Valley Marathon which was super hot. An Otter Pop at an aid station may have saved my life. 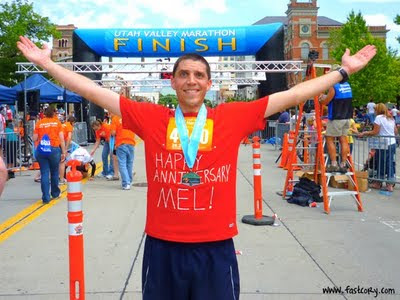 July: Another year at the Bryce Canyon Half Marathon. I also ran the Deseret News Marathon for the first time. Toward the end of the race you run on the street with Utah's largest parade, the Days Of '47 Parade. I loved that section and gave a High Five to every single person I saw: 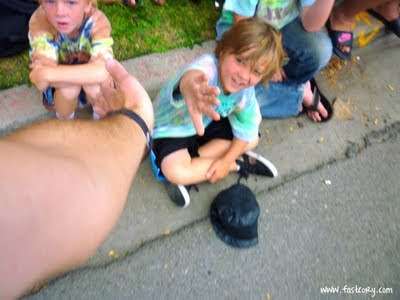 September: I had trained hard and was expecting to crush my 4:25 marathon PR at the Top Of Utah Marathon. And in fact I did crush my PR! If by "crush" you mean 1 minute. Yep. All my hard training got me a PR by one sissy minute. 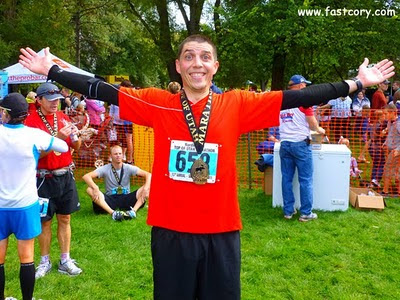 It was a bittersweet PR, I wanted to be faster. It was after that race that I decided speed isn't my thing, I was going to go for distance. And I signed up for my first 100 miler.

October: Ran the hometown St. George Marathon, one of my favorites. I felt really honored that they used one of my pictures for the marathon poster for the second year in a row: 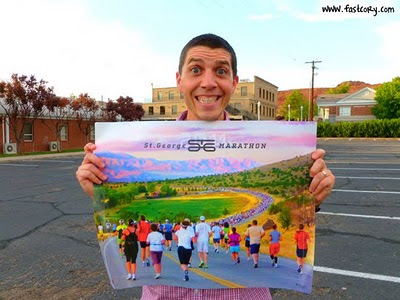 November: And now we reach the big enchilada. The You're-Going-To-Throw-Up-A-Cheese-Sandwich-After-This-One race. The 100 miler...the Javelina Jundred. Usually my writing is laced with plenty of sarcasm, but I'm being truthful when I say that this really was a life-changing experience.

This race was by far the hardest thing I have ever done. This was the best pain I've ever felt. This was the most fun I've ever had in a race. This is one of my happiest achievements. I will always cherish the belt buckle I earned at the finish line. (HERE is the full report.) 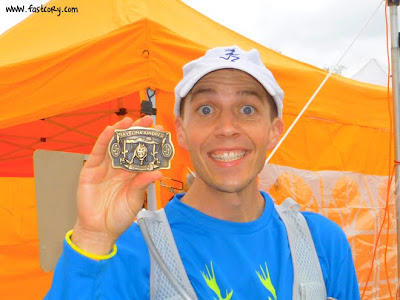 December: I threw a half marathon party complete with 50 good friends, lots of laughs, and a hefty supply of junk food.

When all is said and done, I did at least a half marathon each month, and finished the year with
7: Half Marathons
6: Full Marathons
1: 50k
1: 100 miler
I learned so much this year as a result of my training, racing, and running adventures. I could not have asked for anything more. I feel so, so thankful. I can't wait to see what is in store for 2012!
Posted by Cory Reese at 6:49 AM